I’ve never been a particularly assiduous follower of Ryan Adams, but my favourite thing I’ve ever heard him do was a version, with The Cardinals, of “Goodnight Rose” on a Henry Rollins show. 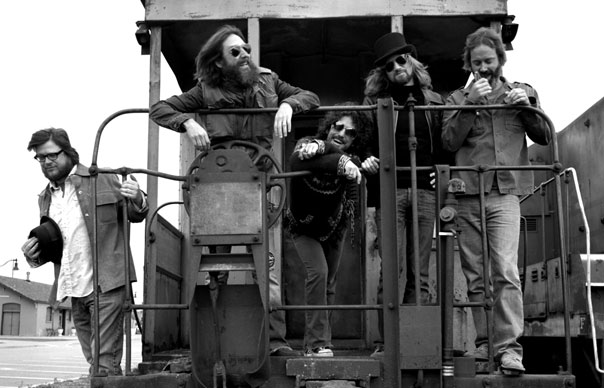 I’ve never been a particularly assiduous follower of Ryan Adams, but my favourite thing I’ve ever heard him do was a version, with The Cardinals, of “Goodnight Rose” on a Henry Rollins show.

It’s not the song so much (you can find a shrunken version of it on “Easy Tiger”), more the jam which engulfs it: a testimony to Adams’ oft-cited, rarely-audible Dead love; a pretty neat showcase for Neal Casal’s spiralling, Cali-spacerock guitar.

I’m sure plenty of Adams fans could point me in the direction of similar stuff, but one of the many things that have struck me about “Big Moon Ritual”, by the Chris Robinson Brotherhood, is that it seems to crystallise and fulfil that particular idea of what Cosmic American Music should sound like. Neal Casal is there in the ranks, though it transpires he wasn’t in the original lineup of this latest Robinson trip; his spot was first occupied by Jonathan Wilson, whose “Gentle Spirit” album from last year is another useful touchstone for where “Big Moon Ritual” is coming from.

Since a low-key appearance on Devendra Banhart’s “Smokey Rolls Down Thunder Canyon” – and not withstanding the odd potent Black Crowes reunion – Robinson has been stealthily realigning himself with what might loosely be described – and has been, ad nauseam – as a new canyon scene in LA. Banhart’s comrade Thom Monahan is behind the desk here, and there’s a nice passage in the press release that encapsulates the project’s spirit: “It’s not a psych band because you have a Prince Valiant haircut and wear Beatle boots,” says Robinson. “It’s psych because that’s where our heads are. We want to make music that blossoms. We want to make music that sounds cosmic.”

Robinson goes on to cite a bunch of intriguing influences for the project: Neu!, Melanie, Flatt & Scruggs, Mel Tillis and Morton Subotnick. Mostly, though, these are hard to detect. “Big Moon Ritual” generally sounds exactly how you might expect: like the guy from The Black Crowes hooking up with some like-minded virtuosi for a clutch of laidback, intuitive explorations of a musical space occupied so fruitfully by The Grateful Dead and The Allman Brothers in the early ‘70s.

The outstanding “Rosalee” even manages to squeeze a compressed “Drums/Space” jam into its bridge, though the song around it is a sprightly country-funk workout that Robinson would have turned into a stadium showstopper two decades ago. Not much wrong with that, you could argue, but the Brotherhood, liberated from certain hard rock obligations, can work it out with a leisurely euphoria that probably better complements Robinson’s cry of “Air getting thinner… Are we getting high?”

There are seven tracks on “Big Moon Ritual”, none shorter than seven minutes, and most feel that they could roll on for a good deal longer than they do: it’d be interesting to hear from anyone who’s been lucky enough to see one of their live shows. Certainly, every time Casal steps up to solo – the one in the predominantly Allman-ish “Star Or Stone” is especially great – there’s a sense that he, and the rest of this terrifically fluid band, would happily pursue some concept of the infinite jam.

Which is just fine. Robinson’s voice and musical character remains strong; so strong, perhaps, that those of you with suspicions of The Black Crowes might still struggle to get behind this one. The odd Moog solos that punctuate these Macon-via-Topanga ballads and boogies, often in lieu of pedal steel, will hardly change that.

For the rest of us, though, “Big Moon Ritual” is a hermetically-sealed, tenderly-executed piece of work that shoots at being both earthy and transcendent, and pulls it off with a very suitable air of effortlessness. Out June 4, I believe, and there’s another album called “The Magic Door” promised for September. I’ll report back when I hear more.