SOUTH BY SOUTHWEST – DAY ONE 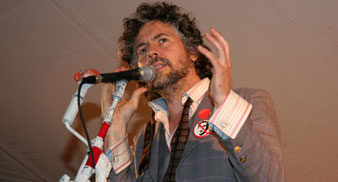 Uncut is here not for the rodeo – Leann Rimes plays tonight – but for the South By Southwest music conference, a four-day festival that involves about 1,500 bands, most of the British music business and quite a few Americans, too. Plenty are here to see, Kris Kristofferson and the assembled multitudes of Americana: SXSW was one of the key nurturing grounds for alt-country in the ’90s. Plenty more are here to try and discover the next indie phenomenon, checking out dozens of geeky grad students in pursuit of what is technically known in A&R circles as The Next Clap Your Hands Say Yeah! (Exhibit A: Page France, from Baltimore. Nasal vocals, handclaps, xylophones, possible Christianity. Six out of 10). Tapes’n’Tapes are meant to be the ones this year; we’ll try and catch them later in the week.

Most of us, though, are here to binge on rock. And the opening night brought a surprise treat – the Flaming Lips playing a pub backyard on the wrong side of downtown Austin.
As their At War With The Mystics campaign begins, little has superficially changed with the Lips:there are still tatty Halloween costumes for the band; Wayne Coyne is still armed with confetti, balloons and that ancient nun glove puppet; couples still climb onstage and propose to each other.

The setlist, though, has been refreshed, and not just with new songs like “The Yeah Yeah Yeah Song” (fuzzy, overdriven, ecstatic) and “Free Radicals” (squalling sludge-funk, with Wayne on doubleneck!). There are also new covers: an opening “Bohemian Rhapsody” that’s absurdly note-perfect, right down to the harmonies; and an inspirational version of Black Sabbath’s “War Pigs”, done as a duet with Peaches.

After that, the new bands we caught looked a bit sickly in comparison, and the jetlag kicked in. Nevertheless, New York’s The Occasion sounded promising, even though two of their members had gone AWOL: faintly psychedelic piano ballads, pot plants on the keyboards, a singing drummer, and an aesthetic somewhere between Nilsson and very early Pink Floyd. Pretty nice. More tomorrow.