A gallery and review from 'Uncut Presents' on Wednesday March 16 at The Vibe, part of the annual music festival in Austin, Texas 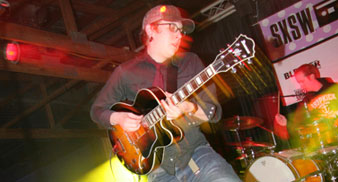 On an unseasonably cool night in Texas, Micah P. Hinson was just about to kick off Uncut’s showcase at the South by Southwest music festival when his cell phone rang. A sympathetic girl in the audience yelled, “She’s not worth it!” before Hinson sheepishly turned his phone off and started playing. Hailing from the West Texas town of Abilene, Hinson is a strange bird onstage, appearing somewhat uncomfortable in his own skin while mumbling desolate, westward-leaning Leonard Cohen lamentations like “Beneath the Rose.” Nevertheless, his wizened, youth-belying voice made for a mesmerising performance.

Belfast’s the Amazing Pilots suffered from a poor mix that prompted guitarist Paul Wilkinson to walk off the stage at one point. The sharp-looking trio never could quite turn it on, though the melancholy pop of “All My Wasted Days” hinted at their capabilities under better circumstances.

Willard Grant Conspiracy delivered the evening’s best set. Their glorious sprawl of psychedelic twang enabled them to touch on a wide array of emotions. The high point was “Soft Hand,” a lap steel and viola accented wall of pop bliss that vocalist/guitarist Robert Fisher humorously introduced as “unnecessarily bright.”

The recurring sound problems finally culminated in American Music Club not starting until almost 2 a.m. Mark Eitzel was in rare form, knocking over his mike stand and kicking at audience members while alternately apologising for his behaviour. After just five songs, including strained readings of “Only Love Will Set You Free” and “Patriot’s Heart,” Eitzel called it a night with two middle finger salutes.

Roll over the images to see a full gallery from the night, below.