Some thoughts about the new issue of Uncut…

Involves Pete Townshend on turning 70, the Who's future, and much more… 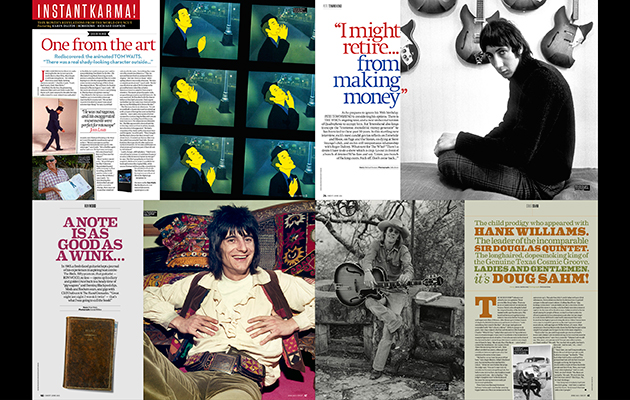 When a sprightly 56-year-old Bob Dylan released “Time Out Of Mind” in 1997, he inadvertently established a new paradigm for the first generation of rock superstars. While, at live shows, they were still expected to play the hits of their youth, they were no longer obliged to ignore the actual digits on their birth certificates. Now, their new music was often obliged to confront mortality; to admit, with appropriate gravitas, that they might soon, one way or another, fade away. “It’s not dark yet,” sang Dylan, “but it’s gettin’ there.”

Eighteen years on, however, as Dylan and his peers march resolutely into their seventies, many have realised that they probably shouldn’t approach each new project as if it may be their last; half a dozen rueful valedictory albums would be enough for even Leonard Cohen. As a consequence, these artists are finding new ways to grow older – Dylan’s peculiar revenant games, for example, or Neil Young’s belated mid-life crisis – and are working out how to deal with playing 50-year-old anthems for a few years more, at least.

On May 19, Pete Townshend, notably vituperative voice of that generation, will turn 70. As Michael Bonner discovers in this month’s new issue of Uncut, out today, however, Townshend shows little enthusiasm for even acknowledging the landmark. Instead, he will be busy continuing a life’s exceptional and complex work: performing incendiary but conflicted gigs with The Who; re-imagining the music that has haunted him for decades (a symphonic rescoring of “Quadrophenia”, in this case); dreaming up radical plots to upset expectation; and, of course, baiting Roger Daltrey.

There’s a lot of the latter in our cover story, one which proves yet again that Townshend remains the king of interviewees. “There’s a desire that I have sometimes to do a show which is just crap,” Townshend says. “Go out in front of a bunch of devoted Who fans and say, ‘Listen, you bunch of fucking cunts. Fuck off. Don’t come back. This is the last time I’m every going to fucking say anything that’s even slightly nice to you.’ Then what you do is plug your guitar into overdrive and walk off stage… I don’t mean deliberately play crap. I mean allow a degree of experimentation that would allow you to make the kind of mistakes that people might say, ‘This is crap.’”

When I was editing Uncut’s Ultimate Music Guide to The Who, I uncovered a great tranche of Townshend features, consistently remarkable for their intelligence and candour. Obligatory hype aside, I genuinely believe this month’s instalment is one of the most compelling.

The rest of the issue isn’t bad, either, I guess. We have interviews with the Boredoms, My Morning Jacket, Ron Wood, Nile Rodgers, several ex-members of Felt, Paul Weller, Richard Dawson and, in this month’s Fractiously Reunited Legends slot, The Violent Femmes. There’s a great piece on Doug Sahm, which has kept me replaying Sir Douglas Quintet’s “Are Inlaws Really Outlaws” for most of the month, plus an archive romp with those incorrigible Happy Mondays. We’ve also got tributes to Daevid Allen, John Renbourn and Andy Fraser, an investigation into the success of Joe Bonamassa, and a reviews section that involves Holly Herndon, Leonard Cohen, the Unknown Mortal Orchestra, Lead Belly, The Rolling Stones, Red House Painters and, by me, an extended piece about the Weather Station album I’ve been mentioning a lot these past few weeks. To recap: this…