A trip to the Dark Side of The Moon, joined on stage by Nick Mason 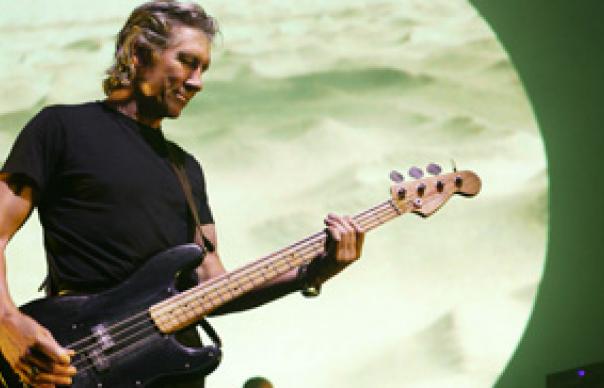 It has been a busy week for Roger Waters. His British tour kicked off in Manchester last Monday, and by Thursday he found himself sharing a Barbican bill with his old Pink Floyd bandmates at a Syd Barrett tribute show. Waters, it should be noted, was not onstage at the same time as his old colleagues.

Nick Mason did turn up, however, at Waters’ sold-out Earl’s Court show – proudly sponsored by Uncut – to assist the 11-piece band run through Pink Floyd’s classic “Dark Side Of The Moon” in its entirety.
The gig was a spectacle of two equal halves, the first half consisting of faithful renditions of expected Floyd classics, alongside some lesser-known Waters favourites from “The Final Cut” and his post-Floyd solo albums. Highlights included “Shine On You Crazy Diamond”, which grew from its delicate shimmering intro into a massive audience singalong, and “Wish You Were Here”, which found Waters in particularly fine voice. The appearance of the famous floating pig during “Sheep” completed part one of this enjoyable nostalgia trip.

As the band took to the stage to perform “Dark Side Of The Moon”, Waters announced a special guest, and Nick Mason took up position behind the additional drumkit that had been wheeled onstage during the interval. The performance was faultless, with the lights and video screen visuals really cranking up the atmosphere. Nick Mason clicked perfectly with the band, as if he had been playing with them for the whole tour. The opening sound effects to “Time”, where Mason accompanied the ticking and ringing of the clocks with his tom-toms before the song burst into life, provided another great moment.

The band (including Mason) encored with “Another Brick In The Wall”, the crowd chanting the chorus. The set closer was The Wall’s standout track, “Comfortably Numb”, with guitarists Snowy White and Dave Kilminster handling the trademark solos with aplomb. This was a fine show made even more memorable with the appearance of Mason, and added yet another chapter of Pink Floyd-related history to this venue.