Robert Wyatt and Nick Mason on ‘I’m A Believer’: “We made our own rules and did what we liked” 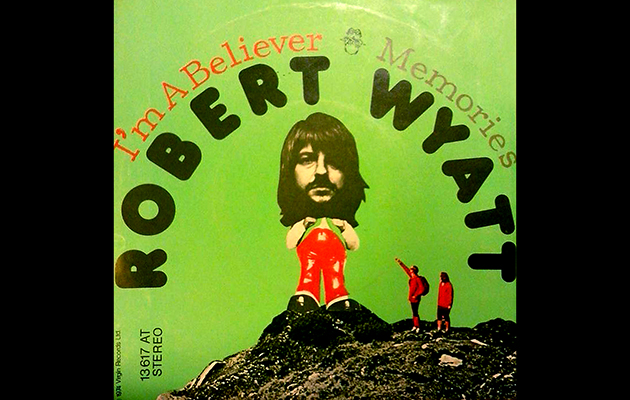 WYATT: It hit No 29, did it? I’m too posh to think about charts… It’s not the chart side of pop music that interests me, it’s the music itself and what it means to people. There’s a competitive edge to charts which I find very tiresome. Most of the records I liked, jazz records, probably sold about 5,000 tops, ever. I remember somebody advising me, “DJs would rather have the chorus first, if they’re going to play it on the radio.” I thought, “Hang on, wait a minute, music should be about expanding your freedoms and possibilities, not about contracting them.”

FRITH: My brother [sociomusicologist and journalist] Simon was impressed when we appeared on Top Of The Pops! But my memory of it is mostly around the sadness and futility. Seeing The Tremeloes buttoned into awkward-looking satin suits and looking sulky and resentful as their manager told them what to do, just observing the pop game from close up. We had to be in the studio at 11am on call for rehearsal. We were hustled onstage at about 5.40pm and when we were supposed to run it through, everyone disappeared – union-mandated break – so we never actually rehearsed or had any idea what was going on.

SINCLAIR: I’d been on with Caravan in 1970, playing “If I Could Do It All Over Again…”. It was funny doing it for Robert and his pop tune!

MASON: Pink Floyd had been on TOTP in ’67. It hardly changed from its first to last show as far as I remember. The same slightly uncomfortable dancing and some DJ shouting. We appeared with Robert two weeks running, and the second week they didn’t want us to show the wheelchair.

WYATT: The producer said, “I’m embarrassed by that wheelchair, it’s not entertaining, can you go and sit in this wicker-work thing?” I told him to fuck off, and he said, “You will never work on this programme again” – but as I just told you, I am too posh to care, frankly. I mean, I can’t wheel a wicker chair, and I need to be able to get out quick in case the cops are coming, for fuck’s sake!

FRITH: Richard Branson went out and bought an antique wheelchair, and insisted that if the BBC was going to object to Robert’s wheelchair, they surely couldn’t object to this beautiful antique version. The whole thing was irrational to the point of absurdity, but Richard insisted and won the day, making the BBC look extremely foolish in the process. And, of course, Ian MacDonald made sure there was a picture in the NME afterwards.

WYATT: We were on the cover of the NME, all in wheelchairs, it looked great – most of us who played at my Drury Lane concert are on there, Mongezi Feza’s just behind Julie Tippetts, and Mike Oldfield is there. Nick Mason’s face is stuck on. It was a real laugh doing it, although there were, I believe, people who wrote to the NME saying it was a bit tasteless… I can’t think why. I thought it was a very good idea. Especially on steps – wheelchairs on steps are dangerous, they’re rubbish! There are people in wheelchairs and with other disabilities, who I know from letters and so on, who were very encouraged that far from my career as a musician being over, it actually got much stronger in terms of my contribution to it. But there were others who thought that I should have been more militant and proactive in terms of disability rights and so on. And I accept that, but the fact is I’m not a professional cripple, I’m still just a musician.

FRITH: I remember almost nothing about Drury Lane [Sept 8, 1974], except being told which movie stars were in the audience. But listening to it now, I almost prefer the live version of “I’m A Believer”!

WYATT: It made a good encore, it was a good laugh. We had Julie Tippetts singing, Mike Oldfield and Fred fiddling away at guitars, two drummers, Laurie Allan and Nick Mason, and Hugh Hopper on bass. And Gary Windo and Mongezi Feza doing little horn parts. Dave Stewart was on the organ, and he came up with that live fairground coda, and it’s funny, because it was Drury Lane which, of course, 150 years beforehand, had music exactly like that.

MASON: That was the only time the song was performed – unless you count The Monkees. I remember it being fun, there were a lot of people who were fond of Robert there. It was very much a one-off show, and they’re difficult as they’re always under-rehearsed, but it was fun.

WYATT: My follow-up single was “Yesterday Man”, a song by Chris Andrews. We never pretended to be reggae but it was obviously influenced by that feel, which was very much the heartbeat of London around that time.

MASON: Did I produce that? Right. I can’t remember what happened to that.

WYATT: The boss of Virgin said it was a bit “lugubrious”. I thought, ‘Oh, that sounds good,’ and I looked in the dictionary, and it isn’t. He wouldn’t put it out. I wouldn’t have minded, but I had to pay for the recording. If you sold millions like dear Mike Oldfield did, then you still got a lot of money, but if you only sold, what did I sell in the end? 50,000? I’d never get any of that back because of the cost of the second LP and so on… So I just said I can’t do this stuff with Virgin anymore. So they said, “Well, you’re not doing anything with anyone else.” So I didn’t for a while, I just went into politics. But there’s no money in that, of course – it’s mostly charity donations at the Morning Star bazaar, so that’s not making a living, is it? I like pop music, but that show side of it, I can’t be bothered. When you get to a certain profile in pop, you’re told what to do and you have to fit into a format, and that was completely alien to me. So I couldn’t have been a pop musician, really. I started out playing pop songs, but we made our own rules and did what we liked. No-one was gonna be pushed around by any of these people.