Read an interview with the Iron Man actor, and see clips from the film here 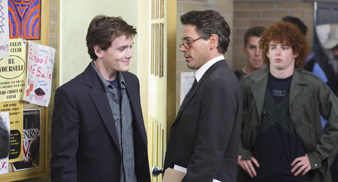 Charlie Bartlett opens in UK cinemas next week (May 23), and the film’s star Robert Downey Jr has spoken out about his role as Principal Gardiner, in the film that has been compared to classic school-based John Hughes’ movies such as Ferris Bueller’s Day Off.

Click on the links here for the film trailer.

What do you think of Charlie as a character?

I think he plays an important role. He offers therapy to the students, who obviously don’t have much of a voice. He offers a friendly ear. If you think about it, some of the great characters in the history of film are the ones that had their asses kicked so hard during the movie, but they’d keep swinging. Charlie is up there with them because he shares this eternal optimism. He’s not trying to be anything he isn’t, but has a lot of facets to his personality. He’s a little messed up, which is endearing. Furthermore he’s got a good heart, his heart is definitely in the right place.

How does his story play out?

Ultimately, what redeems Charlie is that he’s a very teachable human being. I think left to his own devices he’ll always make the right decision. Charlie goes on a quest, and there is this kind of hero’s journey. By the end he knows what is right and he intends to do it.

And how do you fit in?

Charlie has an adversarial relationship with the principal of the school, played by me. My character senses there is something special about this kid, but decides that he is also troublesome when his very own daughter takes a shine to him. Thus this chess match ensues between the establishment and the boy.

Was it difficult for you to play such an establishment character?

It was easy. The truth is, lately anyway, I’m a big old square. I’m grounded and focused, and a little bit up tight. I’m a perfectionist. I live to be married, be a parent and do movies.

So the movie is an inter-generational battle then?

It’s a bit of a rights of passage movie in the strangest sense of the word I think. There is this great coming together of principal and student, culminating in the truth finally coming from my character’s heart. It wasn’t easy for Gardner to get there, but he realises by the end that he could trust the guy, and they become allies. It’s this amazing intergenerational thing that really speaks to the truth of where we’re shooting and missing with our kids, and where we should be quick to see how this generation is right. The move speaks to several generations and I think that both sides of the coin are given equal weight


Do you think of yourself as a method actor?

You’re supposed to have an aesthetic distance between you and your character. When it’s done you’re supposed to be able to detach. That can be become an issue when there’s too much happening outside. But the job’s the job. You can’t have a contractor thinking back to the last house he built.

How do you feel to Charlie Bartlett being compared to John Hughes movies?

There was a kind of simple understanding of who John was making the movies for. The people Hughes was making the films for are our age now. The audience that Jon and Anton are addressing, although it includes us and we’re given a voice, is today’s generation. I think that’s best. Teen films are often conceived and written and imposed by people that don’t really understand the generation they are trying to approach. That didn’t happen here.

What would you say to people about the film?

Will you just see Charlie Bartlett! We can only give so much! We did our part you sons of bitches. Just do it … or I’ll come at you like a wombat!