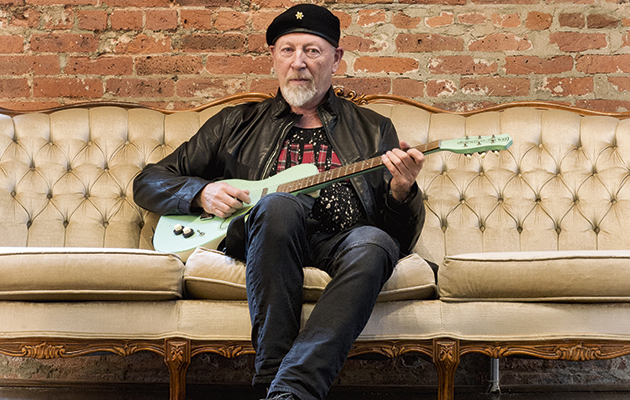 To Hampstead, then, where RICHARD THOMPSON takes Tom Pinnock on a tour of his old haunts. Between stop-offs at former homes, favoured eateries and long-lost pubs, the visionary singer and guitarist reflects on his transcendent new album, 50 years of Fairport Convention and life as a Muslim in Trump’s America. “You can’t fail to reflect your own morality in what you write…”

The first-time visitor to Hampstead, wandering around this leafy, genteel area of London, may feel in need of a tour guide. If so, they could do worse than Richard Thompson, who’s spent much of his life pacing these streets.

“It’s rather tranquil around here,” he says, leading Uncut on a walk down the high street towards the heath. “Here’s Thurlow Road where Linda and I used to live, above Ridley Scott, who went on to an undistinguished career…” Thompson points to an upmarket greetings card store. “When we lived here, this was a health food shop owned by Steve Howe.”

The Coffee Cup, which the guitarist would frequent when he was at school, is still on Hampstead High Street, though – “It was always full of middle-class revolutionaries” – but the King Of Bohemia pub, which lent its name to a song on Thompson’s Mirror Blue (1994), is gone. “Another one to tick off. Oh well, easy come… I ran into my daughter outside it when she was a teenager, unexpectedly, when she was just totally out of control,” he says, explaining the inspiration behind the song. “Disturbing.”

Thompson, in contrast, has been teetotal since he converted to Sufi Islam aged 23. “It’s the fork in the road,” he explains. “You see two choices and you think, ‘I could go down that one, for a few years…’ When you see your colleagues having a hard time with addiction, it’s a reminder that it is a choice. Not was, but is.”

We pause in the garden of Keats House, where Thompson takes a fallen plum from under a tree; Keats reputedly wrote “Ode To A Nightingale” under a similar one, now long gone, on this very spot. “It’s ripe, perfect,” Thompson says, plum eaten. “Now I feel a strange urge to write poetry…” A few minutes away is Hampstead Heath, which might have given the guitarist a taste for rock’n’roll when, as a child, he heard the amped-up music from the distorted soundsystems of visiting carnivals.

Despite his reputation as a folkie, the 69-year-old is still keen to play electric guitar, as his new album 13 Rivers attests. It’s one of his loudest, most serious collections of songs, perhaps his most powerful since 1999’s Mock Tudor. Backed by longtime collaborators Michael Jerome on drums and Taras Prodaniuk on bass, Thompson rages against the pain and ecstasy of love, the impermanence of emotions, and the madness rising in America, his main base since the mid-’80s.

“I’ve just moved to New Jersey,” he explains as we settle in Café Rouge, once another of the guitarist’s haunts, The Dome. “I’ve spent 30 years in California, but times change. I’m closer to England now, so if I fall foul of Donald Trump, then it’s a quicker escape route. I intend to spend more time here in the UK. It’s getting insane over there.”

After 2013’s Electric and 2015’s Still, produced by Buddy Miller and Jeff Tweedy, respectively, 13 Rivers finds Thompson himself taking the reins, and as a result it’s a sparser, less fussy record which hits a lot harder, both emotionally and aurally.
“It’s been a time of upheaval for me,” he explains. “We’ve had some family traumas in the last couple of years, so there’s a lot of change. Having said that, I don’t really know where these songs come from – I don’t know what happens in my head when I come up with this stuff.”

Other topics up for discussion today are Thompson’s visionary work with Fairport Convention, the stunning albums he made with Linda Thompson in the ’70s, being a Muslim in Trump’s America, and accidentally inventing folk rock. “Liege & Lief was always conceived as a one-off, but having done it we couldn’t really see a way to go backwards. It was an exciting way to update the tradition – we were singing these old songs, in some cases 400 years old, with these extraordinary stories and very powerful lyrics, and combining that with the power of rock music.