A round-up of some of my favourite recent albums 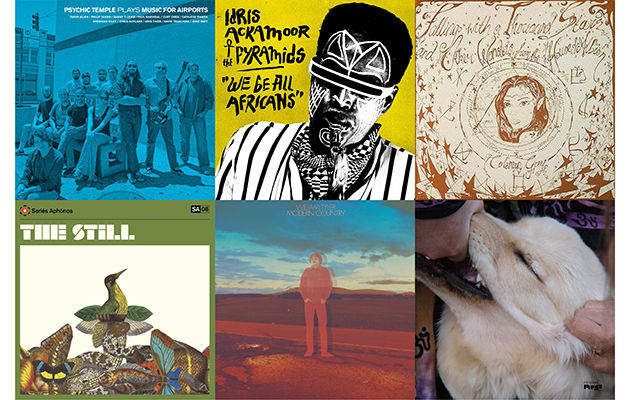 One of my favourite albums of the year is a vinyl/Bandcamp gem that’s well worth tracking down: Psychic Temple “Plays Music For Airports”. Chris Schlarb’s collective have been making indie-ish records for a while now; the recent “III” being a low-key highlight which initially felt a bit slight compared with this one, but which has really grown on me these past couple of months.

Psychic Temple’s capacity for a sort of elegant, spiritual jazz comes to the fore on this exceptional companion release, in which a ten-piece band make Miles-ish improvisatory gold out of the Eno ambient classic. Horns replace the original Robert Wyatt piano line, Mike Watt drops by on bass, and two keyboardists seem to be channelling Joe Zawinul and Terry Riley, while Schlarb himself plots guitar trajectories straight out of a mellow “Dark Star”. A sprightly original workout, “Music For Bus Stops”, adds Blue Note bop to the mix, and further compounds the overwhemingly great vibes.

To connoisseurs of Afro-futurist jazz who find Sun Ra a little too mainstream, Idris Ackamoor☥The Pyramids have long been a sacred cult, one predicated on three private press albums released out of San Francisco in the early ’70s. The trio’s unlikely 21st Century rebirth, nurtured in German studios, compounds rather than detracts from their myth, even as the music on this second reunion album, “We Be All Africans”, tends more towards funk fusion than their wilder first incarnation; Fontella Bass’ work with the Art Ensemble Of Chicago might be a useful reference point. Highlights, though, chiefly come when saxophonist Ackamoor lets rip, notably over the cosmic synthscape of “Epiphany”.

Time moves slowly in the world of The Necks, an Australian trio whose hour-long improvisations become incrementally more revered as the years pass. In the three decades since they formed, however, the members have never shied away from other freeform musical outlets, not least pianist Chris Abrahams. Abrahams’ first appearance in your record collection may have been as an auxiliary member of The Triffids. Now, he specialises in grand keyboard meditations (an intriguing recent solo album, “Fluid To The Influence”, is worth checking out), also anchoring this Berlin-based quartet, The Still. “The Still” is a more linear and less demanding listen than most Necks sets, with Rico Repotente’s guitar adding tremor and friction to the likes of “The Early Bird”. No less immersive, though; think of them as a sanctified midpoint between The Necks and another German-based jazz unit, Bohren & Der Club Of Gore.

It’s tempting (also: perhaps a bit daft) to pitch Dylan Carlson’s “Falling With A Thousand Stars And Other Wonders From The House Of Albion” as the “Liege & Lief” of drone metal. For his latest solo project, the Earth pivot applies his familiar monolithic aesthetic to the British folk canon, rendering airs like “Reynard The Fox” and “Tamlane” (ie “Reynardine” and “Tam Lin”) into blackened instrumentals. It’s all very much of a piece with the desert rock meditations that have preoccupied the Seattle vet these past few years, merest hints of folderol weaving into his stunned guitar tone. The songs share a theme of “human/supernatural interaction” with fairies, and Carlson notes, “The genesis was my own personal encounters that occurred in 2010-2011.” An unusually literal reading of traditional music, perhaps, but the slow majesty with which Carlson honours these songs is worlds away from perfumed whimsy.

Another heavyish guitarist on sabbatical from his day job – in Arbouretum – Dave Heumann’s 2015 solo album, “Here In The Deep”, stuck broadly close to the reverberant folk-rock songcraft of his main band. Still, the guitarist’s appetite for more esoteric sessions drifted out: on improvisations for yoga workshops that land on Soundcloud, and in this similarly lovely cassette of rippling instrumentals. “Cloud Hands” is a manoeuvre in Tai Chi, and the vibe is generally contemplative as a consequence: a little Frippertronic, a lot like the Krautrock outlier Manuel Gottsching. Amidst the airy shapes, however, Heumann’s virtuosic heaviness remains in the mix, adding crunch to the self-explanatory half-hour of “Substantial/Insubstantial”, and implying that Neil Young’s Deadman soundtrack might work as a pretty cool meditation tape, too.

In a similar vein, but somewhat higher profile, is William Tyler’s much-feted journey from interstate to autobahn, “Modern Country”. Tyler is not the first musician to spot congruencies between the motorik glide of Krautrock and the choogling momentum of country-rock. That said, few have embraced the concept so harmoniously as the sometime Lambchop mainstay, on this strong follow-up to 2013’s “Impossible Truth”. His rhythm section have form in similar zones, being Darin Gray and Glenn Kotche, whose CVs intertwine Wilco, Tweedy, Loose Fur and Jim O’Rourke. “Modern Country”, though, is very much Tyler’s vehicle, from the plangent opener “Highway Anxiety” (distinct kin to Michael Rother’s “Flammende Herzen”) through to the widescreen, Local Hero-ish anthemics of “The Great Unwind”. At a time when a generation of imaginative American roots guitarists are reaching creative maturity, Modern Country reasserts Tyler’s place at their forefront.

O’Rourke himself is back in discreet action, alongside Christian Fennesz for “It’s Hard For Me To Say I’m Sorry”. Fennesz’s solo records (newcomers are encouraged to try 2001’s “Endless Summer”) are generally ravishing affairs, very much an aesthetic, accessible way into avant-garde music. In the company of multi-tasking Jim O’Rourke, however, Fennesz has historically mutated into something of a laptop prankster, via three boys’ club albums along with Peter Rehberg as Fenn O’Berg. Thankfully, this first duo set is luxuriantly pretty, as the Austrian guitarist’s steely note-bending is processed into great billowing soundscapes that bear comparison with the recent feted work of Tim Hecker. The album and song titles may derive from an old Chicago ballad, but irony is not immediately apparent; instead, a heroic mutual soppiness is the key to this dreamy two-tracker.

Finally this week, the new one from Rhyton, “Redshift”. These past few years, Jason Meagher’s Black Dirt Studio in upstate New York has been something of a crucible for adventurous new American music. Steve Gunn is probably the most high-profile repeat client, but few can have visited so frequently, under various guises, as the three members of Rhyton. Evolving from fairly skronky beginnings, and passing through a great set of ostensibly Greek folk-psych (2014’s “Kykeon”), Redshift at once honours and transcends those influences, chucking in a fair bit of Dead-style ambulation (“End Of Ambivalence”). Listen out, too, for some frayed bar-room Americana more in keeping with guitarist Dave Shuford’s other recent project, D Charles Speer & The Helix, culminating in a strung-out, funky jam on Joe Walsh’s “Turn To Stone”.