Reviewed: War On Everyone 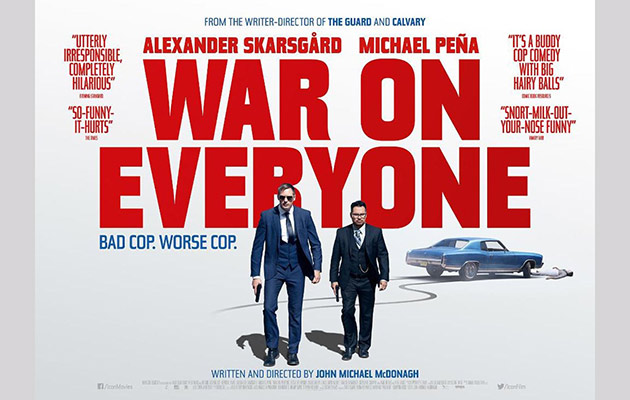 “If you ain’t got a good script, you ain’t got shit,” says one character in John Michael McDonagh’s latest film; a bold assessment, as it turns out. In cahoots with actor Brendan Gleeson, McDonagh’s previous films, The Guard and Calvary, explored the rich landscape of Ireland and the idiosyncratic characters one might encounter there. War On Everyone finds a shifting of gears and a new geographical setting: America.

In 2012, McDonagh’s brother Martin made his American debut with the uneven Seven Psychopaths – would his sibling make a smoother transition Stateside?

War On Everyone follows the exploits of Terry (Alexander Skarsgård) and Bob (Michael Peña), two corrupt cops working a beat in New Mexico. After a series of suspensions, they are on their last chance when they get a whiff of a bank heist involving a dastardly British aristocrat and his dandyish sidekick; events then take a turn for the worst.

Evidently, McDonagh is enjoying himself here – his dialogue is crisp and funny and Skarsgård and Peña enjoy the bants. “The world is full of injustices,” Terry counsels one aggrieved perp. “Call Amnesty International,” suggests Bob. McDonagh drops in amusingly incongruous references to Conrad, Diaghilev and Van Gogh, among others; a brief trip to Iceland proves comically rewarding. It is fun enough, but it lacks the richness and complexity of McDonagh’s earlier work. It also lacks a conspirator like Gleeson, whose spirit, heart and substance is missing here.