Hold tight, it's going to be a fast one! 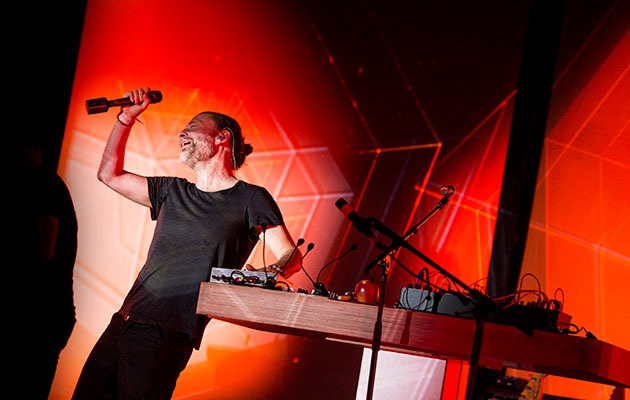 In February, Thom Yorke began posting random phrases and sentences on Twitter – “putting rocks in our hearts” (February 23), “pierced by long nails / by coloured windmills” (March 22), “I’m in a room full of robots” (May 11). To his 1.03 million followers, this surely meant a new album was due. After all, Yorke has form in this kind of practise – both in Radiohead and with his other projects. He similarly teased the release of Tomorrow’s Modern Boxes with weeks of visual clues left on his social media channels, while Radiohead ‘disappeared’ from the web prior to the release of Moon Shaped Pool. Part of the fun, naturally, is heading down these endless internet rabbit holes, where every utterance assumes a cryptic purpose. It’s worth noting, too, that Stanley Donwood, Yorke and Radiohead’s sleeve artist of choice, has begun posting new artwork on his Instagram and Twitter feeds – another favourable portent that something might be afoot. Incidentally, one such piece is called Bad Island – which seems as good a title as any for a new Thom Yorke album.

Regardless of what might actually arrive – and by what means and when – this current solo tour at least allows Yorke the chance to let off some steam before Radiohead’s next round of tour dates. One suspects that the 2,000-capacity Usher Hall offers a more intimate setting than, say, the four nights they have booked at Madison Square Garden in July. Here, at least, Yorke could reach out and touch the audience – if only he could just stop fidgeting for a moment. One minute, he’s hunched over one of the laptops or keyboards dotted on smart white plinths around the stage; the next he’s chopping out chords on his white Telecaster; the next he’s doing his early-Nineties car park rave dance. Such is the nature of this set – which is presented almost as a continuous mix – there is very little opportunity for between-song chatter. Yorke is a naturally funny guy – humour is not, in fairness, a commodity with which Radiohead are frequently associated – and there is an incident, late on, during a power glitch, where he asks quizzically, “Shall we just wing it?” It reminded me a little of the Roundhouse in 2016, during a similar malfunction in the start of “Nude”, where he started ribbing Jonny Greenwood by asking, “Is it buggered?”

While otherwise eyes may be on the fluid, agile Yorke, there is strong work being done elsewhere on stage. He is joined by long-time producer Nigel Godrich as well as Dutch visual artist Tarik Barri. Godrich does much of the musical heavy lifting – moving from laptop to bass to guitar – while Barri’s high-end visuals are projected onto five huge, rectangular panels positioned behind the trio. His images are beautifully rendered accompaniments to the music – the mysterious geometric shapes from the PolyFauna app spiralling effortlessly through the tech-funk of “Black Swan”, or the black ink spilling across the screens during the expansive “Two Feet Off The Ground”. At one point during “I Am A Very Rude Person”, what look like alien Polo mints glide through an infinite digital landscape. The swirling vortex that accompanies “Impossible Knots” astonishingly recalls the opening credits for Jon Pertwee era Doctor Who.

The set is largely drawn from The Eraser and Tomorrow’s Modern Boxes along with a smattering of Atoms For Peace songs and others Yorke has performed live down the years. The earliest of these, “Twist”, surfaced in 2011 on a DJ mix he compiled for XFM, while more recent additions include “Impossible Knots”, “Not The News” and “Traffic” from August 2015 and “I Am A Very Rude Person” and “Two Feet Off The Ground” from late last year. There is one genuinely new song – “The Axe”, which Yorke debuted in Florence at the start of the run of dates. Built around keyboards and pulsing beats, it carries a predictable air of deep, contemplative melancholy and unease: “Goddam machinery, why won’t it speak to me?” sings Yorke. “One day I’m going to take an axe to it. The pitter-patter.” Considering Yorke/Radiohead’s long history of writing songs and having them around unrecorded for years, it’s hard to tell whether these songs might form the rump of a new album. As it stands, there is something deeply satisfying about the way these new(ish) songs sit next to the established material, their sequence subtly reinforced by the tone of the music – from the fierce drum’n’bass of “Impossible Knots” to the itchy ambient flow of “Black Swan” and on to the skittering loops of “I’m A Very Rude Person”.

In a way, this is very much business as usual from Yorke. The songs help pay tribute to some of Yorke’s earlier electronic influences – the slow-moving melodic tones of Autechre, say, the wonky synths of Burial and old school jungle of Origin Unknown. “I felt I was in this long dark tunnel” indeed. The evening ends, though, with Yorke alone at a piano, under a panoply of stars, giving us a stunning – and unexpected – version of Radiohead’s “Glass Eyes”. Not for the time, it sees Yorke ending an evening of lovely, clever and involving music with the unshowiest kind of resolution.

Set list:
Interference
A Brain In A Bottle
Impossible Knots
Black Swan
I Am A Very Rude Person
Pink Section
Nose Grows Some
Cymbal Rush
The Clock
Two Feet Off The Ground
Amok
Not The News
Truth Ray
Traffic
Twist