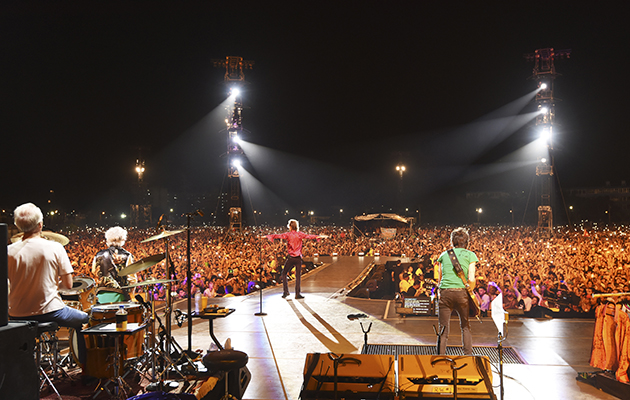 Over the weekend, Bill Murray worked a couple of shifts behind the bar at his son’s Brooklyn restaurant. You can watch footage online of Murray, wearing a striped shirt over a t-shirt, pouring shots of whiskey or tequila. As he served customers – and, on occasion, himself – the actor sang along to Stones’ hits, “Start Me Up” and “Miss You”. It strikes me that should they need one, Murray would make an ideal host for the Stones’ next gig – at the Desert Trip festival, where they will share a bill with Dylan, McCartney, Neil Young, The Who and Roger Waters.

In some ways, the Stones’ presence on the Desert Trip bill feels like part of the band’s ongoing commitments to reshape their touring practices. Rather than quantity, quality has become the watchword at the heart of the Stones’ live experience. The band no longer head out on exhaustive 147-date treks like the Bigger Bang tour, instead they have favoured smaller runs: the 50 & Counting tour (30 dates), its counterpart 14 On Fire (29), the Zip Code Tour (17) and América Latina Olé Tour (14) earlier this year. This has allowed them to mix the thrillingly low key (Sticky Fingers, in full, at Los Angeles’ 1,300-capacity Fonda Theatre) with the high profile event (2 nights at Hyde Park, 44 years after their 1969 performance.

Havana Moon distinctly falls into the latter camp: a document of their March 25 performance in Cuba’s capitol, the first major international rock act to play the island (the Manic Street Preachers notwithstanding). The Stones have always understood the purpose of grand gestures – free concerts a speciality, playing to 1.5 million people on Copacabana beach in 2006 among them – and the show in Cuba was another historic first for the band. A text crawl at the start of Havana Moon gives us some insight into the behind-the-scenes admin: 58 trucks, 500 tonnes of kit, 21 days to build the set.

The Stones show on the island represents a gradual ideological sea change on behalf by both the Stones and the Cuban authorities. Once, the Stones music was banned on Cuba; during an interview segment at the start of Havana Moon, Mick Jagger is quick to recognize the country’s “weird romantic aura. It was the country that stood up to the United States. There is still this attraction of people like Fidel and Che Guevara.” Both Cuba and the Stones – considered dangerous in the Sixties, currently enjoying greater diplomatic access – now play host to world leaders and elder statesmen. “They times are changing,” says Jagger. 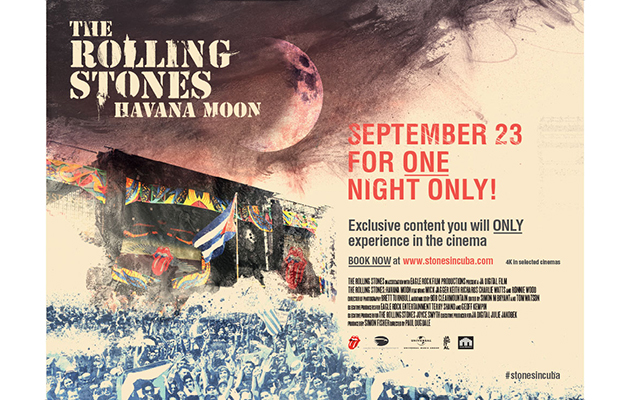 As a concert film, Havana Moon demonstrates the assiduous way the Stones continue to manage their legacy. In the absence of a new studio material since 2005’s A Bigger Bang, the Stones have relied on a mix of canny reissues (Exile On Main Street, Some Girls, Sticky Fingers) and an ever-expanding catalogue of live releases. They’ve released 11 concert DVDs since 2007’s The Biggest Bang, stretching from Hyde Park in 1969 to the Marquee in 1971, Hampton Coliseum in 1981 and Tokyo Dome in 1990 up to Martin Scorsese’s peerless film of their 2006 show at the Beacon Theatre in New York.

What, then, Havana Moon offers us is a robust underscoring of the Stones’ key strengths: showmanship, craft, strong tunes. Director Paul Dugdale brings a sense of the Stones’ live experience – the crane shots hovering above a vast crowd, the close ups of banners fluttering in the night air, the fleeting constellations of iPhone flashes, those two crazy guys down the front with John Pasche’s lips and tongue logos painted on their cheeks. These kind of images have become stock elements of concert footage, although it would be hard to dispute their particular potency here; Havana Moon isn’t just a celebration of the Stones doing what the Stones do best, it is freighted with a deeper sense of liberation and of possibility. “The Stones can do things that governments can’t,” acknowledges Keith Richards. “It’s just because of our peculiar situation. You can affect people in a different way without it being official.”

We’re in a setlist that with very few exceptions doesn’t stray much beyond 1980 – which is part of the contract that the Stones have with their audience. Although the songs are instantly familiar, the band consistently manages to find more resonances, more inflections and more variations of texture, rhythm and mood. Bridges To Babylon’s “Out Of Control” enjoys some fiery back-and-forth between Jagger on the harmonica and Richards’ guitar solo, while the interplay between Chuck Leavell’s mellow keys, Richards’ acoustic guitar and Ron Wood’s delicate lead lines on “Angie” is well captured by Dugdale’s camera crew. Other intimate highlights include Wood’s beautiful, sympathetic slide playing on “You Got The Silver” and the few moments at the beginning of “You Can’t Always Get What You Want”, with Jagger and Richards bringing the song into focus together on acoustic guitars.

Meanwhile, “Paint It, Black” is thrilling and nihilistic, driven by Charlie Watts’ pummelling beat and a powerful, hypnotic guitar attack from Richards and Wood. “Midnight Rambler” might lack the extra level of guitar brilliance Mick Taylor brought to the 50 & Counting shows, but it’s still a mighty thing to behold, with Richards and Wood locked in a complex groove of solos and riffs. For all the theatricality of a Stones’ show these days – the costume changes, video screens, fireworks – the inherent dramatic tensions of songs like “Midnight Rambler”, “Gimme Shelter” and “Sympathy For The Devil” are never quite lost, the band’s darker, lysergic impulses just a shot away.

In a show of supremely well-judged pace, it is to the Stones credit that any songs from the final third of the set – “Gimme Shelter”, “Start Me Up”, “Sympathy…”, “Brown Sugar”, “You Can’t Always Get What You Want” and “(I Can’t Get No) Satisfaction” – would be an acceptably impressive closing number. Of course, “…Satisfaction” has long been their final song and tonight it carries additional heft. It would be foolish to suggest that the Stones playing Cuba is somehow going to accelerate the democratic process – but what, after all, could be more appropriate in this specific location than a song about alienation and impatience and frustration? Now, as then, the Stones’ capture the spirit of the times.

Havana Moon is in UK cinemas on September 23; you can find more information by clicking here