Reviewed: Mick Jagger’s “England Lost” and “Gotta Get A Grip”

A state of the nation address from the Stones frontman 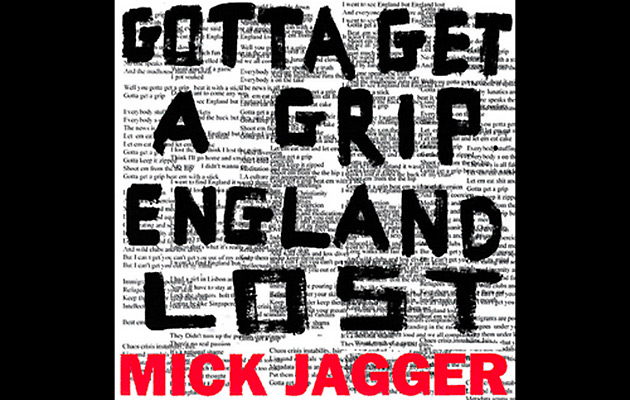 Over a year since a bruising referendum campaign that saw the UK vote to leave the EU, discussion about the future of these shores has occasionally reached rock’s top table. To some – such as Jeff Beck and Ringo Starr – Brexit offers a positive change. Others, including Roger Waters, take the opposite view – that ending Britain’s forty-four-year partnership with continental Europe is a willful act of self-destruction.

Into this debate comes one Michael Philip Jagger – a former LSE student, with newsworthy views of his own. Jagger has some form in this department, of course: the Stones’ “Street Fighting Man”, “Highwire” and “Sweet Neo Con” dealt with hot topics as a matter of intent. More recently, the brilliant “Doom & Gloom” found Jagger tackling international conflict, environmental chaos and economic inequality; in the end, he surmised, the only solution was to dance.

Today – the day after his 74th birthday – Jagger has released two new songs, “England Lost” and “Gotta Get A Grip”. They are, he says in an accompanying press statement, urgent responses to the “anxiety, unknowability of the changing political situation.” They have been rush-released, he explains, because “I didn’t want to wait until next year when these two tracks might lose any impact and mean nothing.”

Jagger reveals that he wrote these two songs in April – presumably only days or perhaps weeks after Theresa May triggered Article 50 on March 29, beginning a two-year countdown to Britain’s departure from the EU. Jagger goes on to articulate his “confusion and frustration with the times we live in.” Of course, it’s easy to accuse wealthy rock stars of glib political posturing – but Jagger is more astute than most. In 2012, he was spotted at the World Economic Forum in Davos, Switzerland; a few years later, Jim Messina, a former White House deputy chief of staff under President Obama, described Jagger as “one of the savviest political observers I’ve come across.”

Jagger explains “England Lost” is “Ostensibly about seeing an England football team lose, but when I wrote the title I knew it would be about more than just that. It’s about a feeling that we are in a difficult moment in our history.” Evidently, though, he sees “Gotta Get A Grip” as a corrective to all the post-Brexit doom and gloom. “The message I suppose is – despite all those things that are happening, you gotta get on with your own life, be yourself and attempt to create your own destiny.” If that sounds like the language of the self-help manual, it marks a sudden change of atmosphere after the more directly engaged “England Lost”. But similarly, on Beggars Banquet the Stones followed “Street Fighting Man” with “Prodigal Son” – retreating from ripped-from-the-headlines urgency to a cover of a blues song by the Reverend Robert Wilkins, as if Jagger suddenly remembered that being in rock’n’roll band was meant to be easy and a lot of fun and nothing like a political obligation.

So what of Jagger’s new music itself? It should perhaps be remembered that his last project outside the Stones, SuperHeavy, featured Joss Stone, Dave Stewart, A R Rahman and Damian “Jr Gong” Marley. Fortunately, there’s not quite the same sense of star-studded overkill here. “England Lost” features Skepta while “Gotta Get A Grip” comes with a handful of remixes by Tame Impala’s Kevin Parker, Norwegian producers Seeb, a Brazilian DJ/producer called Alok and the Stones’ own musical director, Matt Clifford.

“England Lost” arrives on heavy, processed beats and a chunky bass line, while bursts of distorted guitars slip and slide in and out of the mix. First thought, it reminds me a little of a mid-Nineties rock/dance mix; Black Grape, maybe? A harmonica solo bursts in halfway through and it’s possible to detect electronic pulses bubbling away under the surface. Jagger treats his framing device – the putative football match – wryly. “It wasn’t much of a game / I got soaked / Didn’t want to come anyway”. As the song progresses, Jagger homes in more directly on the subject at hand. “I think I’m losing my imagination / I’m tired of talking about immigration / You can’t get in, you can’t get out / I guess that’s what it’s really all about”. You can imagine the response on the Daily Mail message boards.

A black and white video directed by Saam Farahmand, stars Luke Evans fleeting from unknown oppressive forces; in a Prisoner-style ending, he is cornered by a group of townsfolk on a beach. “Where did you think you could go?” Inquires their ringleader, a sinister child. Subdued, Evans’ character walks off whistling “Land Of Hope And Glory”.

“Gotta Get A Grip” has a slower groove than “England Lost”, powered by a mighty, rolling riff that sounds like it’s been sampled from “Start Me Up”. In the video a decadent nightclub (is there any other kind in this kind of video?), erupts into artfully choreographed, slow motion chaos, while Jagger rails against everything from corruption to nationalism. “Everybody’s stuffing their pockets, everybody’s on tape,” he howls. “The news is all fake/ Let ’em eat chicken and let ’em eat steak/ Let ’em eat shit, let ’em eat cake“. Later, Jagger free-associates over the beat: “Meditation and medication and LA culture and acupuncture…”

It lacks the headline focus of “England Lost”, but it’s the better of the two songs. It has a richer, more layered atmosphere, with guitars fading in and out, the song heaving under Jagger’s treated vocals. In a way, it reminds me a little (a little) of “Memo For Turner”: another song similarly built around groove and vibe rather than melody. Kevin Parker’s mix, meanwhile, renders the song in gonzoid, psychedelic hues.

You can hear both songs below, along with the Parker mix.