Reviewed: Five of my favourite 2016 albums 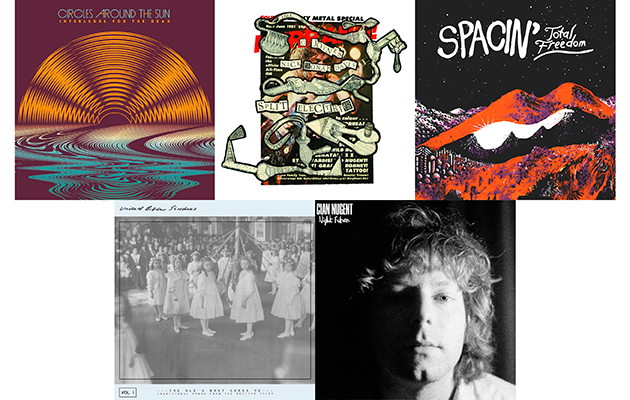 The new issue of Uncut should be arriving with subscribers sometime this weekend, and be in UK shops a week today (ie February 23). But it occurs to me this morning, that, in the absence of anything new to plug (though of course there are plenty of Ultimate Music Guides and History Of Rocks on sale in our shop), I should probably round up a bunch of records I’ve enjoyed these past couple of months.

It’s tempting to see the progress of Dublin guitarist Cian Nugent as analogous to that of his old duetting partner, Steve Gunn: from acoustic instrumentals (“Doubles” (2011)), through psychedelic full-band workouts (“Born With The Caul”(2013)) to this vocal-heavy, song-focused new set, “Night Fiction” (Woodsist). But, as proved by his extra-curricular activities in bands like The Number Ones, Nugent is his own man, influenced by indie-rock artisans like Cass McCombs as much as avant-roots fingerpickers. “Night Fiction”, then, emerges as an engaging sampler of Nugent’s range as well as his virtuosity, though the suspicion he’s best suited to longform freak-outs is confirmed by the closing “Year Of The Snake”; a heady folk-rock swirl that unexpectedly transforms into a Wedding Present-style ramalam deep into its 12 minute span.

Like Nugent, among the serried ranks of guitar soli, assembled by the Tompkins Square label for their “Imaginational Anthems” comps, C Joynes and Nick Jonah Davis have both stood out; not so much for their radical differences, but for their Englishness. “Split Electric” (Thread Recordings) finds them alternating tracks and experimenting with the current fad among their avant-folk ilk; electric guitars. The results are infallibly virtuosic and often compelling, with Joynes (Cambridge, rowdier) just outflanking Davis (Nottingham, crystalline). Notable cover art, too, in that the collage built on a 1981 Kerrang cover is by outsider folk singer, Richard Dawson; another reboot of the vernacular that, like his own music, hovers between rough-hewn wit and self-conscious whimsicality.

The eldritch aesthetic of United Bible Studies, a shadowy Anglo/Irish folk collective, might present them as kindred spirits of, say, Current 93. In fact, for all the sombre tones and distant hint of drone, this latest limited-edition (“The Ale’s What Cures Ye” (MIE Music)) is a good deal more approachable than that: a set of traditional songs that should beguile orthodox folk fans as much as it does those still bickering over the acid/freak/wyrd-folk nomenclature. The rustle of field recording provides a certain lo-fi ambience, but it’s the warmth and precision of the performances that are most striking, shifting as they do from spare enchantments recalling Alasdair Roberts (“Twa Corbies”) to Watersons-style a cappella knees-ups. A little psychedelic, no doubt, but it’s probably the ale, not the acid, that’s most prevalent here.

In the relative scheme of things, Jason Killinger’s Spacin’ might not have had quite the love afforded their old Philly sparring partners, Purling Hiss (both bands evolved from local legends Birds Of Maya). As this second album, “Total Freedom” (Richie Records/Testoster Tunes) proves, though, they’re at least their lo-fi equals; a fetishistically scuzzy psych-boogie band, whose choogles often accumulate a near-mantric, motorik intensity. Nothing here quite recaptures the slacker exhilaration of “Sunshine No Shoes”, from their 2012 debut, “Deep Thuds”. Nevertheless, there’s another fun Afrobeat jam (“Stopping Them”) and a vibe – roughly, the Velvet Underground gatecrashing Villa Nellcôte – that is most fully realised on the 10-minute centrepiece, “US Ruse”, one-finger piano solo and all.

In all the Grateful Dead live activity last year, big-name guest guitarists – first Trey Anastasio, then John Mayer – were seen as critical to the box office propositions. Anastasio’s triumphs at the Fare Thee Well shows notwithstanding, a lower-key choice might have been Neal Casal; one-time Americana solo artist, now comfortably ensconced as Chris Robinson’s lead guitarist in the Brotherhood, and occasional Phil Lesh affiliate. Casal’s actual contributions to Fare Thee Well were broadcast between sets; a bunch of unobtrusive jams belatedly released here under the group name of Circles Around The Sun. Subtle Dead allusions proliferate on ” Interludes For The Dead”, of course, notably on a spectral version of “Mountains Of The Moon”. Less expected is the prevailing funkiness, with organist Adam MacDougall driving the likes of “Kasey’s Bones” into rewarding MGs territory.

Casal and MacDougall, incidentally, will be in London next month when the CRB finally make their UK debut on March 14 at Koko. Been waiting for that one for years; maybe you have too?