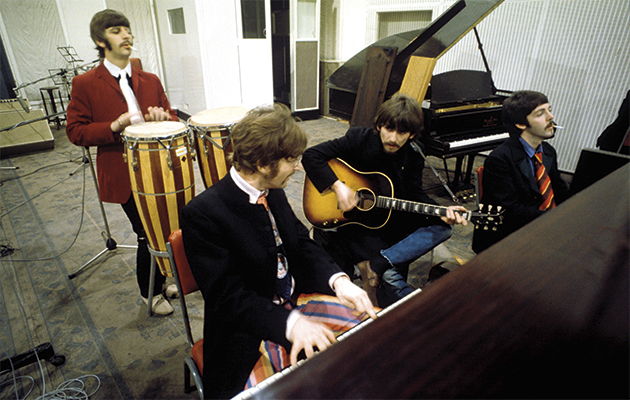 FIFTY years on, where do you start with Sgt Pepper? How about with the ending. On January 19, 1967, The Beatles began work on a song provisionally titled “In The Life Of…”. Even in an embryonic state, with just John Lennon on acoustic guitar and Paul McCartney on piano, the song is clearly on a par with the innovative studio recordings for “Strawberry Fields Forever” and “Penny Lane” that have filled the previous weeks. This new song takes in newspaper headlines and suburban drudgery; its tone is sorrowful and poignant; its structure progressive. The only trouble is, The Beatles don’t have a satisfactory conclusion for it. “Take 1” finds assistant Mal Evans counting bars before McCartney’s piano chords simply halt. Another take, meanwhile, finds The Beatles hitting upon a more experimental approach, humming a final chord in unison with a little help from their friends. The sound is striking: part churchy hymnal, part meditative chant. The Beatles settle, finally, on a climactic major E piano chord, played simultaneously on three different pianos. “Have you got your loud pedal down, Mal?” asks McCartney. “Which one’s that?” replies Evans. “That right hand one, far right,” explains McCartney. “It keeps the echo going.”

That The Beatles had the opportunity to work through ideas such as these in depth and with focus was reflective of the group’s changed circumstances by early 1967. On August 29, 1966, the band played their final paid concert at San Francisco’s Candlestick Park. Without the impositions of a rigorous touring itinerary, The Beatles could now fully explore their creative impulses within the confines of Abbey Road’s Studio 2. Back in the olden days – 1964, say – the Fabs bashed out Beatles For Sale in seven non-consecutive days between touring commitments. They could now devote over 300 hours to Sgt Pepper between December 1966 and April 1967. As a consequence, this 50th anniversary edition luxuriates in alternative takes, overdubs and instrumental versions, as befitting the first deep archaeological survey of The Beatles’ archives since the Anthology series 22 years ago. Critically, this is only the first time an individual Beatles album has been given such treatment. After all, where do you start? How about with Sgt Pepper?

The sessions that Lennon, McCartney, George Harrison and Ringo Starr played on were never intended to be heard publicly. This anniversary edition of Pepper, then, represents a breakthrough in Apple’s thinking. For once, we can map the creative path taken by The Beatles, from shared memories of childhood haunts, through Jim Mac’s Jazz Band and Pablo Fanque’s Circus Royal, to a 17-year-old runaway from Stamford Hill, a commercial for Kellogg’s Corn Flakes and a visit to India. But if the finished Pepper album is of historical significance, is the same true of the outtakes?

This edition (now with added “Strawberry Fields Forever” and “Penny Lane”) is available as a 2CD set, a double vinyl edition and a bells-and-whistles 4CD/Blu-ray/DVD boxset. All of these come with Giles Martin’s new stereo mix of the album. In the cheaper seats, the 2CD set includes 18 complete early takes that run in the same sequence as the finished album. For those willing to rattle their jewellery, the Super Deluxe Edition – reviewed here – offers a total of 33 early takes, sequenced in chronological order, alongside the original mono mix of the album and various mono rarities. It begins with “Strawberry Fields Forever [Take 1]” on November 24, 1966 and ends with “Sgt Pepper’s Lonely Hearts Club Band (Reprise) [Take 8]” from April 1, ’67 – the final piece of music cut for the album. What a glorious five months to be a Beatle.

“Take 1” and “Take 7” of “Strawberry Fields Forever” are among a handful of takes that appeared in part on Anthology, the song’s progress bolstered here by the addition of “Take 4” and “Take 26”. “Take 1” is gossamer-light and wistful. The Mellotron lines sound like a church organ, McCartney’s bass has a pleasingly loose thwock to it, while Harrison’s piercing slide guitar and Starr’s light brushes are discreet, unobtrusive. There are lovely harmony vocals from Lennon, McCartney and Harrison that, disappointingly, never survived beyond this take. By “Take 4”, the song slips into a familiar lysergic soup, ushered in by the flute sounds of McCartney’s Mellotron. Starr’s drums are busier, Harrison is more prominent in the mix as he picks out the rhythm melody on his guitar. “Take 26” lifts off with brass, strings, backwards cymbals, swaramandala. Already a seismic creative shift has occurred, with the warm intimacy of “Take 1” replaced by a groovy trip that would be full-blown psych spectacle by the time The Fabs completed the song. They followed it with “When I’m Sixty Four [Take 2]”.

In comparison to the heavyweight vibes of “Strawberry Fields Forever”, this is a buoyant knees-up from Macca. But taken together, the two songs demonstrate the increasing competitive tensions between Lennon and McCartney – the difference between the former’s art-school disposition and the latter’s harmonic sweetness. They complement each other perfectly, of course, on “A Day In The Life”, which enjoys five different iterations here: “Take 1”, “Take 2”, “Orchestral Overdub”, “Hummed Last Chord [Takes 8, 9, 10 and 11]” and “The Last Chord”. The first two takes show us the bones of the song’s brilliance but, arguably, it’s the subsequent addition of McCartney’s “Woke up, got out of bed…” that provides an earthy grounding for Lennon’s weary reveries. In total, the band spent 34 hours on “A Day In The Life”. By contrast, they whizzed through Please Please Me in just shy of 10 hours.

As it progresses, the Super Deluxe Edition traces the day-by-day creative momentum of the Pepper sessions. From February 1, “Sgt Pepper’s Lonely Hearts Club Band [Take 1 – Instrumental]” is a lot grungier, moving in fits and starts, with bent notes in the mix. By the end of the day, they’ve reached a more familiar place with “Take 9” – though the ending is not yet in place. As the song rumbles to a close, McCartney ad libs, “I feel it, I feel it, I feel it, oh baby, now I feel it, I feel it, I feel it, baby I’m free now, gotta be free now,” before he concludes, “I don’t like that. It’ll probably be another day of singing it.” A conversation about breath control follows. A few days later, on Feb 8, we catch the Fabs at their heaviest with “Good Morning Good Morning [Take 1 – Instrumental]” before the song finally takes flight and shape with “Take 8” on February 16.

Aside from the heavy hitters, the songs averagely receive two takes each here. A couple, like “Fixing A Hole” and “Being For The Benefit Of Mr Kite!”, don’t differ substantially from their finished versions. The band worked out arrangements, tempo and phrasing in rehearsal. For “Lucy In The Sky With Diamonds”, for instance, all the heavy lifting took place during one all-night rehearsal session. The band only spent two days on recording. The song is nailed in a few takes, but not before Paul offers some tips on delivery to John on “Take 5”: “Sing those quicker, ‘cellophane flowers of yellow and green’.” Elsewhere there are some Lennon LOLZ on “Being For The Benefit Of Mr Kite! [Take 7]” while “Lovely Rita [Speech and Take 9]” foregrounds some lovely gospel-y piano.

There are other unexpected surprises. The instrumental takes of “Getting Better” – 1 and 12 – are as warm and airy as a spring day. Conversely, the Met Office recorded “widespread gales” on March 9 and 10, when the song was recorded. The weather had improved considerably by March 15, when Harrison oversaw two instrumental versions of “Within You Without You”. “Take 1” is a haunting devotional drone lasting over five minutes, far superior to the final album version. Admittedly, it’s strange to visit these familiar places from new directions, without the reassuring grain of Lennon, McCartney or Harrison’s voices. The original mono mix of the album is as God and The Beatles intended. The band spent three weeks on the mono mix, while the stereo mix was done in three days without their direct involvement. The mono mixes are solid, powerful and focused. The physical impact, say, of “A Day In The Life” is equalled only by the vertiginous “Unreleased Mono Mix – No 11” of “Lucy In The Sky With Diamonds”. The sprightly guitar riff that opens “Getting Better” is suddenly harsher, more metallic in mono. In stereo, “She’s Leaving Home” sounds rather wafty and sentimental, but the “Unreleased First Mono Mix” here is as stark as “Eleanor Rigby”.

Accompanying all this is Giles Martin’s newly mixed stereo version inspired by the original mono. It means everything is fuller and better balanced. The title track comes across as far more acidic and frantic, propelled by McCartney’s spitting lead guitar. “Within You Without You” appears a more urgent exploration of raga motifs; a rabbit hole into the mystic realms. Even “A Day In The Life” offers new perspectives, from the ingenuity of Ringo’s fills in the first 90 seconds to the harmonic complexity of Paul’s basslines. The clarity of Giles Martin’s work illustrates the continual, corrective changes of mood and pace on Pepper; the release “When I’m Sixty Four” gives after the dense thrum of “Within You Without You”, for instance.

Running to almost three and a half hours, this is The Beatles finally, belatedly, entering a marketplace already busy with archive-raiding anthologies and boxsets. But critically it offers valuable insight into the speed at which The Beatles travelled during this period. Here they are, blasting out acid-soaked rock stomps one day, Indian ragas the next. The Beatles never worked with such unified purpose again, but what this Pepper boxset captures is the fun, intense, playful creative ferment; the triumph, in other words.