I had lunch with Harvey Weinstein once. This was during the Cannes Film Festival, and I was among a group of film journalists invited to one of the swelegant hotels on the Croisette to nibble canapés and listen dutifully while Weinstein unveiled the forthcoming slate for his company, Miramax. 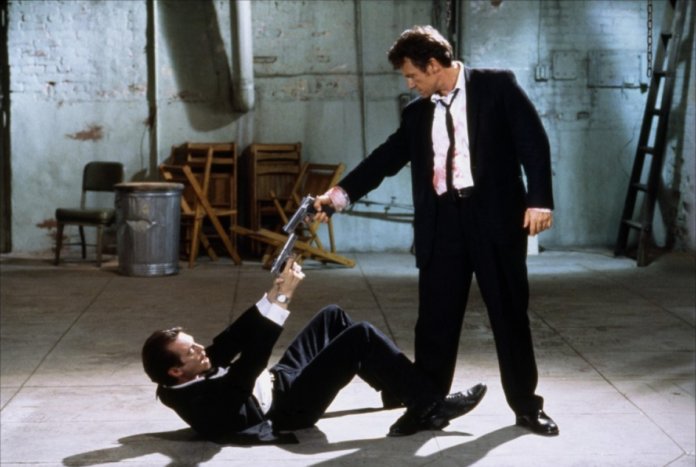 I had lunch with Harvey Weinstein once. This was during the Cannes Film Festival, and I was among a group of film journalists invited to one of the swelegant hotels on the Croisette to nibble canapés and listen dutifully while Weinstein unveiled the forthcoming slate for his company, Miramax. Miramax were enjoying a terrific year – the musical Chicago had won six Oscars that spring, bringing their tally of Academy Awards up to a mighty 36 – and Harvey was on typically bullish form as he bigged up his movies, bits of canapé flying at high velocity out of the corners of his mouth like shrapnel. Like many others there, for me the most anticipated movie on Miramax’s 2003 schedule was Kill Bill Volume 1, the first film from Quentin Tarantino since Jackie Brown six years previously.

There was a lot going on at Cannes that year, I remember. Arnold Schwarzenegger was in town, launching his return to the Terminator franchise with a lavish party at Pierre Cardin’s Hobbity villa overlooking the French Riviera, old school Hollywood vibes were provided by Clint Eastwood, there with Mystic River, and some tabloid titillation from Vincent Gallo, whose The Brown Bunny arrived featuring a did she/didn’t she blow job scene. But despite such A list glamour and questionable artistic merit, the biggest headlines that year were reserved for Gus Van Sant’s Elephant, a post-Columbine meditation on a high school massacre that won the Palme D’Or. I can’t help but wonder, had Kill Bill Volume 1 been ready to launch at Cannes that spring (it was eventually released in October) would it have eclipsed everything else at the festival?

Tarantino had significant history with Cannes. After all, it had been the scene of the filmmaker’s biggest triumph, when Pulp Fiction had won the 1994 Palme D’Or, providing a brilliant start to a campaign that climaxed with a Best Original Screenplay Academy Award at the Oscars. Cannes 1994 put Tarantino on the map – and with him, his patron Weinstein and Miramax. But Tarantino’s debut had also played at Cannes – in an Out Of Competition slot at the 1992 festival. That year, the Cannes line-up included Robert Altman’s The Player, David Lynch’s Twin Peaks: Fire Walk With Me, Hal Hartley’s Simple Men and Merchant Ivory’s Howard’s End. The Palme D’Or was won by Bille August, for the Bergman-scripted drama, Den Goda Viljan. Top drawer fare obviously, but none of them packed quite the same punch as Reservoir Dogs.

Reservoir Dogs still is – yes! – an amazing, awesome, pumping powerhouse of a movie. Even the poster has chops. In 1992, mainstream movies felt as dead as Dillinger. Among the top 5 grossing titles at box office movies that year were The Bodyguard, Home Alone 2, Basic Instinct and Lethal Weapon 3: dinosaurs from the Eighties, movies with shoulder pads. The independent scene, meanwhile, was still fairly fragmented: filmmakers like Stephen Soderbergh, Whit Stillman and Hal Hartley were making literate, talky films, experienced hands like the Coens, Lynch and Jim Jarmusch were walking their own particular paths, and Spike Lee was giving a fresh voice to black youth culture. All of these filmmakers were held in high esteem, but – apart from the odd breakthrough moment like Blue Velvet – they didn’t really make much impact outside the arthouses. Arguably, then, Reservoir Dogs was the film that lifted independent cinema into the mainstream. I’m reminded here of a phrase used by former Time Out and Uncut writer Brian Case while reviewing a Sam Fuller box set for us: “Cinema as fist.” It was certainly true of Fuller, of course, but also a deeply appropriate description of Reservoir Dogs.

Detailing the aftermath of jewelry heist that’s gone badly awry, Reservoir Dogs was almost pathologically cine-literate – a minute doesn’t go by without some kind of nod to Kubrick, Scorsese, Peckinpah, Hong Kong action cinema, Rashomon, The Taking Of Pelham 123, Kiss Me Deadly and Repo Man. This outpouring of influences and references felt somehow invigorating, and in interviews, Tarantino’s rapid-fire monologues about movies – all movies, any kind of movies, even shit ones – proved wholly infectious. Tarantino’s back-story was appealing, too. He’d worked in a video store, Video Archives, on Manhattan Beach, which kind of made him a regular guy, rather than some highfalutin’ film school graduate. It’s perhaps no surprise that Simon Pegg‘s sitcom Spaced got Tarantino’s seal of approval (and a American DVD Commentary): here were other film-obsessed, twentysomething slackers who’d never really grown up. Spaced did homages impeccably, and it demonstrated a love for and understanding of everything it referenced: just like Tarantino’s movies.

Part of the fun of Reservoir Dogs was watching great character actors like Harvey Keitel and Steve Buscemi shout at each other, spitting testosterone like heavily armed refugees from a David Mamet film. (Reservoir Dogs was one of two 1992 movies that helped relaunch Keitel’s flagging career: the other was Bad Lieutenant). You suspected Tarantino was the kind of guy who sat around with his pals from Video Archives quoting chunks of dialogue from Walter Hill movies and who, for his part, wanted to make a film whose dialogue was just as quotable, just as funky. And to get Harvey Keitel to deliver that funky, quotable dialogue… well. That must have been tremendous.

Apart from the many on-screen highlights – the Madonna speech, the ear-cutting scene, the ever-increasing pool of blood around Tim Roth’s Mr Orange – Tarantino’s soundtrack was a revelation. Taking a lead from Scorsese’s music-rich movies, Tarantino pumped Reservoir Dogs with lost 70s AM rock hits – “Little Green Bag”, “Stuck In The Middle With You”, “Magic Carpet Ride”, “Hooked On A Feeling”. The soundtrack album was so outrageously good it changed the way audiences connect to music in movies. The Reservoir Dogs OST was so successful – Billboard has recorded sales of 822,000 copies – the soundtrack album subsequently became a handy extra revenue stream for film companies looking to make an extra buck out of their hipster movies, with Polydor managing to squeeze two separate soundtrack albums out of Trainspotting.

20 years on, what’s the legacy of Reservoir Dogs, then? The mid-Nineties’ Tarantino effect seemed to be that every other American indie movie – and plenty of studio films – featured a lot of dudes swearing and shooting each other, stopping only to out-hipster each other with lengthy digressions about arcane TV shows, all cut to some groovy tunes. More recently, Juno and Up In The Air director Jason Reitman has staged readings of movie screenplays in Los Angeles – alongside Shampoo, The Breakfast Club and The Big Lebowski, Reitman chose to mount a reading of Reservoir Dogs in February, with an all-black cast, including Laurence Fishburne as Mr White. But perhaps the biggest contribution Reservoir Dogs made to the broader culture was helping pull the underground overground: everything from Swingers to The Usual Suspects owes Reservoir Dogs some kind of acknowledgement.