Read an interview with Nick Cave 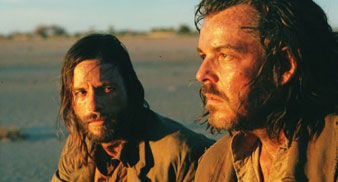 With his screenplay for John Hillcoat’s ‘The Proposition’, the internationally revered singer-songwriter Nick Cave has produced a richly crafted story of beauty, savagery and redemption. A bushranger western set in 1880s Australia, ‘The Proposition’ stars Guy Pearce and Danny Huston as Irish outlaw brothers caught up in a deadly Faustian pact with a British police captain and his wife, played by Ray Winstone and Emily Watson.

In this Uncut.co.uk interview Nick Cave and John Hillcoat answer some questions on the movie.

# How did you come to make a western set in the 19th century outback?

Cave: “Johnny is a very good friend of mine. He came to me and said, ‘would you write a movie about bushrangers in Australia, a fictional story?’ It’s not something I’d do under my own steam, but it’s something I’d do for him. And three weeks later I sent it off. It took three weeks to write.”

Hillcoat: “Nick and I have been collaborating on various things for a long time. I’ve always been obsessed about trying to do an Australian western with the ingredients of the Outback, conflict with Aboriginals, bushrangers, all those elements. I was developing the idea and Nick was on board to do the soundtrack. But the years went by and Nick got more and more frustrated with how long things were taking, so I asked if he wanted to give the screenplay a go. I did suspect, because of Nick’s narrative songwriting, where the characters are so vivid, that something really good would come out of it.”

Cave: “For Johnny, Australia had its western story as well. It had its wild west, and that hadn’t been exploited cinematically at all. There weren’t genre films being made about that period unless they were biopics of famous Australians – the Ned Kelly story, the Mad Dog Morgan story or whatever. So this was a rich mine to plumb.”

# Your intention was to make The Proposition a distinctly Australian story. What elements make it particularly Australian for you?

Cave: “We didn’t want it to sound like an American western that had been dumped in Australia. There’s a certain incompetence that exists in the Australian character today, a real savagery and cruelty behind that kind of attitude. And the humour, which is as dry as the desert. That comes out of people being where they probably shouldn’t be. And certainly this film is about an isolated community, people struggling in a place where they really have no right to be.”

Hillcoat: “At that time, it was the last frontier. They basically just went further and further into the desert, into the most inhospitable terrain.”

Cave: “To me the major point was that it was so far out in inhospitable countryside. So Captain Stanley and his wife can’t go anywhere, they just had to stay there. The answer to Stanley’s problems, really, is to quit his job and go somewhere where he and his wife should be. He’d probably have quite a nice life. And the same goes for the other characters as well.”

# How much historical research went into the film?

Cave: “It’s hugely researched on Johnny’s part. From my point of view, not a hell of a lot of research, but I read a book about the Aboriginal situation because Johnny wanted a different take on the way Aboriginals are usually treated in Australian films. He wanted a different take to the liberal view that’s thrust upon the Aboriginals, where they just stood around and allowed themselves to be wiped out. The indigenous actors were really pleased to be in a film where they got an opportunity to fight back.”

Hillcoat: “We wanted a kind of mythic and deliberately created fiction, not to be bogged down in a specific historical events, although I guess we were a bit like magpies where you just pick out the best bits to create a drama. This story really does run true to some sort of history.”

# You shot The Proposition in the sweltering Queensland desert in high summer, and everyone in the cast seems to be covered in filth and flies. Was it as uncomfortable to shoot as it looks?

Hillcoat: “Yes. The cast were completely shellshocked by the conditions, because they were wearing three layers of clothing and it was like 57 degrees Celsius. The hottest day actually was riding on the clay plane, which was like a reflector. I’m not exaggerating but the thermostat actually broke because it got so hot. It would have probably been close to 60 Celsius.”

Cave: “You were the local joke really, because it kept sliding further into summer, and the locals were thinking it was going to be really funny watching these people try to make a movie under those conditions. Nobody could even open their mouth without a fly crawling into it.”

Hillcoat: “The poor actors. Most of the crew had hats with nets, and the actors of course couldn’t do that, so everyone had a dose of swallowing flies. As soon as one is going down your throat, there’s a kind of gag reflex if you’re quick enough. So we were sharing the secrets of how to cope with swallowing flies, and there was also a horse lotion that we adapted. I kept saying ‘flies are our friends’, trying to encourage them to be part of the story. Which they ended up being.”

# As well as writing the script to The Proposition you also composed the soundtrack with Warren Ellis. How was that different to writing and recording together in the Bad Seeds?

Cave: “There is an enormous freedom when you have the themes given to you, so the writing of it is faster than a Bad Seeds record. What slows down the whole process of making a record is writing of songs, but if you’ve got the themes in front of you it’s just a matter of making some music that energises the film or adds a lyrical quality or whatever. Having said that, Warren had a massive input into the soundtrack, he played most of the stiff on it. A lot of the music came from ideas he did in his bedroom.”

# There is extreme violence in The Proposition, but only in brief bursts. Was it a conscious decision to keep these incidents short, sharp and shocking?

Cave: “There was certainly an attempt, from the start, to say this is going to be a violent film. You are to expect some violence. And I guess part of the exciting thing about writing this script, for me, was delaying those inevitable acts of violence for as long as we could get away with.”

Hillcoat: “There was a conscious decision to try and be realistic, not gratuitous. I think it’s actually becoming more gratuitous, violence in mainstream films. We could have gone the Mel Gibson route – in fact, the more lucrative route. And because we were trying to show the harsh reality what was happening on the frontier, you can’t shy away from the fact that it was extremely violent.”

Cave: “Some films these days make me sick, because they are basically just relentless body counts. I don’t think this is like that at all – there are genuinely sensitive moments, and an intelligence to the script and the dialogue. It is about an inhospitable environment. For the type of film it is and the period it’s set in, I personally found the violence quite restrained.”

Hillcoat: “Also you see the consequences of the violence. In fact a lot of the story is about how it impacts on people’s lives as opposed to just the sensation of it. But there is always a sensation to violence, no matter how it’s represented.”

Cave: “I actually have a problem with violence on the screen. A lot of it I find tiring and boring, almost as boring as sex on the screen. But an attempt was made here not to exhaust the audience through having to sit through some sort of horror show, blood and guts, for two hours. So the violent episodes are very necessary for the thrust of the story. They were really just punctuation points between a fairly meditative, slow kind of film.”

# Queensland looks almost like another planet in The Proposition. Does that landscape have a different character to other parts of Australia?

Cave: “There’s an extra bleakness to it in a way, but it’s very beautiful too. That was the real surprise to me, from seeing the thing on paper and then actually seeing the film. It is very faithful to the script on one level, but I wasn’t prepared for how beautiful the film actually looks. The way the landscape is described on paper was much more brutal and hard.”

Hillcoat: “I think there was a real advantage, and a conscious decision on my part, to get an outside cinematographer with an outside perspective. The Outback has been photographed in a certain tradition, but Benoit Delhomme had a real fresh eye for it – he was very excited as well as being terrified by it, he was like a little child. But in the harshness there was this intense beauty as well.”

# This is your third screen collaboration together after Ghosts… Of The Civil Dead and To Have And Have Not. Is there any connection between the three films?

Cave: “I guess in all these films there is a sense that morality is a luxury that we can afford in less fraught times. In extreme situations and extreme environments, morality becomes a very grey issue.”

Hillcoat: “There is a connection in that all three deal in extreme environments and characters under extreme conflict. I have to say I am most happy with The Proposition. I’ve got my reservations on all three but I’m most happy with this one.”

Watch the trailer to ‘The Proposition’ via the link below.