Early on in Lawrence Of Arabia, the head of the Arab bureau, Mr Dryden, calls Lawrence into his office and invites him to investigate the progress of the Arab Revolt against Constantinople and to appraise the strength of the Arab tribes. 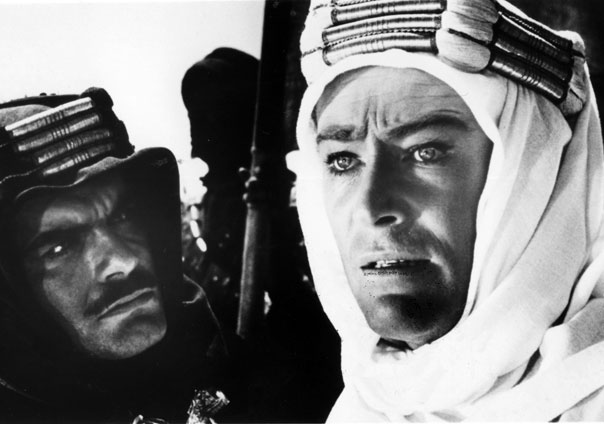 Early on in Lawrence Of Arabia, the head of the Arab bureau, Mr Dryden, calls Lawrence into his office and invites him to investigate the progress of the Arab Revolt against Constantinople and to appraise the strength of the Arab tribes.

He is to take the measure of Prince Faisal, who is out in the desert, “anywhere within three hundred miles of Medina,” says Dryden. “They are Hashimite Bedouins. They can cross sixty miles of desert in a day.”
“Oh thanks, Dryden. This is going to be fun,” replies Lawrence.
“Only two kinds of creature get fun in the desert,” asserts Dryden. “Bedouins and gods, and you’re neither. Take it from me. For ordinary men, it’s a burning fiery furnace.”
“No, Dryden,” says Lawrence. “It’s going to be fun.”
“It is recognised,” replies Dryden, “that you have a funny sense of fun.” Lawrence strikes a match and offers it to Dryden’s cigarette, he blows it out and the camera cuts to the desert at dawn: red and gold on the horizon.

So began T E Lawrence’s marvellous adventures, as dramatised by David Lean. Lawrence Of Arabia made a star of its lead actor, Peter O’Toole – who died yesterday. Of course, plenty has already been written about O’Toole in the last day or so – much of it addressing his striking looks – as Peter Bradshaw put it in The Guardian, “that long, handsome face compellingly suggested something intelligent and romantic. But there was also something tortured there, sexually wayward and dysfunctional.” It’s those characteristics that Lean deploys so powerfully in Lawrence Of Arabia – a film with no women among the cast, but whose star is every bit the romantic lead. Golden hair, blue eyes, billowing white robes. “Aqaba is over there,” he tells Sherif Ali, “it’s only a matter of going.” Of course, “over there” is the other side of the Nefud desert, “the sun’s anvil”, and the line defines Lawrence – the madman’s risk, the grand romantic gesture, the astonishing self-confidence, the masochistic streak.

O’Toole’s star continued, of course – Beckett, Lord Jim, The Lion In Winter, The Ruling Class, and later, My Favourite Year. But Lawrence Of Arabia, rightly, will will endure as his memorial.