Pete Seeger: “You should never give up!” 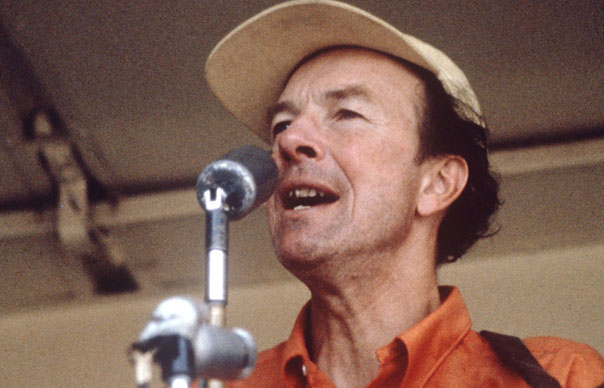 If there were other 92-year-old dissidents on the Occupy Wall Street march, the only one to make headlines was Pete Seeger. Veteran of a thousand demonstrations stretching back to the 1930s, the godfather of folk protest marched 30 New York blocks in winter cold to prove not everyone’s politics mellow with age. “I wanted to make the point – you should never give up!” Seeger told Uncut from his New York State home. “There’s a quote I like by a writer, Robert Fulghum: ‘There’s no hope, but I may be wrong.’”

In that indefatigable spirit come two new Seeger albums. To honour the centenary of friend and fellow legend Woody Guthrie, there’s Pete Remembers Woody, while A More Perfect Union, a collaboration with fellow folkie Lorre Wyatt, is a collection of gentle but serious songs tackling issues from Hurricane Katrina to the BP oil spill in the Gulf Of Mexico. Its guest voices include Arlo Guthrie, Emmylou Harris and Bruce Springsteen, the last having previously championed Seeger on 2006’s The Seeger Sessions, a record its namesake says he’s never heard. “I haven’t listened to any recorded music since I was 19,” claims Pete, a tad improbably. “I prefer to experience music live!”

Fulsome in his praise for Springsteen, Seeger swerves when asked about Bruce’s campaigning for President Obama. “I was singing with someone last week, and they had a song that went, ‘You’re not the man I voted for…’” This seems oblique for a man who was a guest at Obama’s 2008 inauguration, but one of Seeger’s aphorisms goes; ‘Be wary of great leaders.’ Raised by an intellectual, left-wing family, Seeger has always allied himself with ordinary people, joining the Communist Party as a young man (disgust with the Soviets later led him to leave) and becoming a musical emissary for left-wing causes. He still thinks of himself as a small ‘c’ communist – “which simply means, no poor, no rich”.

Seeger’s activism frequently landed him in trouble. In the 1950s he was blacklisted and his records banned, and when he refused to co-operate with the red-hunting House Un-American Activities Committee he was threatened with prison. He remained defiant. “I told the committee that asking someone to reveal who they voted for and who their friends were was a deeply un-American thing, entirely at odds with the constitution.”

As the author of such abiding anthems as “Where Have All The Flowers Gone” and “Turn! Turn! Turn!”, and one of the best Vietnam War protests, “Waist Deep In The Big Muddy”, Seeger’s mark on American history is etched deep. He’s still the godfather of folk, though Seeger doesn’t care much for the ‘f’ word. “We called what we played People’s Music, but it didn’t catch on.”

Perhaps one reason it didn’t is that the music enjoyed by regular US Joes and Janes was often anathema to the austere folkies, seen as tainted by commerce and capitalism. Rock’n’roll was plain vulgar. Hence the outrage when Bob Dylan ’went electric’ at the 1965 Newport Folk Festival. The story that Seeger was stalking around backstage with an axe, threatening to cut the electricity cable, is, alas, too good to be true, but Seeger admits he wanted to turn down the sound “because you couldn’t hear the lyrics”. Dylan, who had grown up with Seeger and Woody Guthrie as guiding lights (though he also dug Little Richard), described Seeger’s reaction to his set as “like a dagger through the heart”. No melodrama, then.

Bob Dylan was yet to be born when the 21-year-old Seeger first met Woody Guthrie at a 1940 benefit concert. Guthrie was six years his senior and already the Dustbowl Balladeer of legend. The pair became friends and co-activists, and their story is recounted on Pete Remembers Woody, its absorbing spoken tales interspersed with polite versions of Guthrie standards like “Do Re Mi” and “This Land Is Your Land”.

Seeger’s testimony dispels some myths about the hard-travelling folk hero, less the singing hobo of his songs than a shrewd sophisticate. “Woody must have been the most creative person of the 20th Century,” says Seeger. “There wasn’t a day he wasn’t writing stories, rhymes, songs, making jokes or pictures. I recall flying with him to Pittsburgh to play for strikers at the Westinghouse plant. He had written down the thoughts of the people below as our metal bird soared above them, then written what the stewardess would be doing that night. He threw away the paper but I picked it up.

“He read voraciously. He came across the French poet Rabelais in my sister’s library and read everything in a couple of days. Over the coming weeks I noticed he was imitating Rabelais, piling on the adjectives. He gave me a big education about America, right down to how to make money singing in saloons! He was funny but angry. He knew tragedy. His
four-year-old daughter died after setting herself on fire.”

What does he say to those who complain that protest changes nothing? “What I’ve always said – that it’s a see-saw with the establishment at one end and the people at the other, and that you might be the grain of sand that tips the scales.”

Seeger also cites the success of the Clearwater organisation he founded in 1969 to combat pollution of the Hudson River, on whose banks he lives, its ongoing grassroots campaign being supported by the annual Clearwater music festival. Most recently, Seeger joined Harry Belafonte, Jackson Browne and others in a New York concert to petition for the release of Native American activist Leonard Peltier, who has spent the last 37 years in jail after a trial widely held to be a miscarriage of justice. What’s next? “My hope for the future is unusual. I note that the Agricultural Revolution took centuries, the Industrial Revolution took a hundred years, but the Information Revolution has taken just decades. If we are creative with it, we can achieve a great deal quickly.”