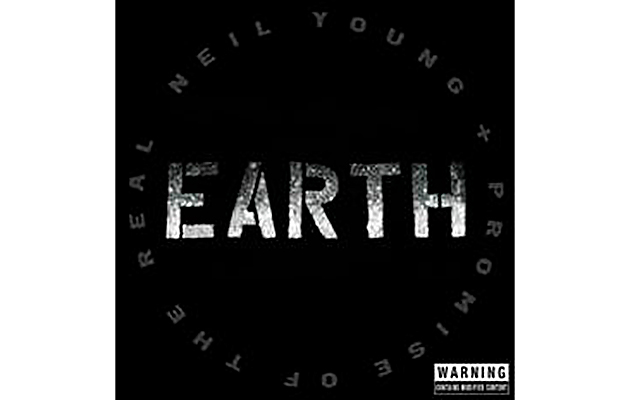 Neil Young’s latest album arrived trailed by a typically unconventional explanation. “We made a live record and every creature on the planet seemed to show up,” Young marvelled on his Facebook page. “Suddenly all the living things of Earth were in the audience going crazy… Earth’s creatures let loose, there were Bee breakdowns, Bird breakdowns and yes, even Wall Street breakdowns, jamming with me and Promise of the Real!”

Earth, then, is the latest broadside in Young’s lengthy, quixotic history of eco-activism that stretches back to 1970’s After The Gold Rush. It is also explicitly linked to last year’s studio album The Monsanto Years, which found Young railing at the bankers “too rich to jail” and the McCorporations who dominate the agricultural industry. He was joined in this latest skirmish by a new backing band, Promise Of The Real – led by Willie Nelson’s sons, Lukas and Micah – who subsequently joined Young on his Rebel Content tour that reaches Europe next month.

Earth is a document of the Rebel Content tour; though it comes with caveats. There are overdubs, Auto-Tune and, most conspicuously of all, songs have been overlaid with animal sounds. You’ll meet an army of frogs who croak contentedly at the end of “Mother Earth”, a flock of geese who rudely honk their way through “Country Home” and a swarm of bees buzzing enthusiastically during the breakdown in “People Want To Hear About Love”. The result pitches Young somewhere between King Lear and David Attenborough: a volatile, intransigent patriarch and doughty champion of the natural world, whose beloved landscape is gradually being eroded by the doctrines of the free market.

Critically, the Rebel Content tour found Young appearing so invigorated by the flexibility of his new charges that he dusted down a number of significant rarities from the cupboard: “Alabama”, “Here We Are In The Years” and “Time Fades Away” among them. Several, like “Vampire Blues”, had not been performed live since the early ’70s. Admittedly, few of these deep cuts make the album’s tracklisting. Instead, Earth loosely traces the arc of Young’s environmental concerns from the 1970s to the present day, corralling together like-minded songs from across the decades. “Vampire Blues” is an assault on the rapacious oil industry, “Country Home” extols the pleasures of rural living while Young’s dreamy sci-fi parable “After The Gold Rush” prophesies environmental catastrophe. Even the Crosby-baiting “Hippie Dream” evokes a bucolic time “when the river was wide and the water came running down”, before it reaches its grim denouement “in an ether-filled room of meat-hooks”.

Hearing a near-run of “Western Hero”, “Hippie Dream”, “Vampire Blues” and “Human Highway” – the deepest cuts here – is genuinely thrilling. Promise Of The Real are respectful of the source but not excessively deferential. They bring agility and a lithe muscularity to the songs. On “Wolf Moon”, they recall the folksy strum of the Stray Gators while on “People Want To Hear About Love” they get their heads down for a rugged Crazy Horse-style choogle. Young, clearly, is having a ball. He seems happy to allow some excitable squirrels nibble at “Vampire Blues” and he noticeably Auto-Tunes the backing vocals on “Western Hero”. It’s possible that Young is using Auto-Tune as a metaphor for genetic modification, artificially augmenting his own work to make a point.

Young has done this kind of thing before – Rust Never Sleeps (making its DVD and Blu-ray debut this month along with Human Highway) was heavily overdubbed in the studio after the initial shows at San Francisco’s Boarding House – but clearly not to this level. The new harmonies Young furnishes “After The Gold Rush” with are spectacular – serene and hymnal – while Young overdubs the original French horn part from the studio album before field recordings of a dawn chorus play the song out. That said, he’s like a kid at Christmas with the effects. Especially on “Big Box”, whose feedback-drenched climax gives way to birds cawing, the parp of a car horn, cattle lowing, wind whistles and the sound of rocket fire and explosions – all in the last 30 seconds. It feels like the aural equivalent of the onstage theatrics he used for the Alchemy tour – the scurrying scientists and technicians, the crumbled balls of paper blown across the stage like tumbleweed. You might wonder why Young would mess around with some of his best-loved songs in this way. But then you might similarly wonder why he decided to release an album recorded in an antique Voice-O-Graph booth at the same time as he was promoting a high-end 24-bit 192khz audio player. It’s Neil’s world, we just live in it.

The set ends with a propulsive 28-minute version of “Love And Only Love”. At one point, the song fades into soft, ambient tones before waves of feedback rise up and it resembles the apocalyptic live coda to “Walk Like A Giant”. Props to drummer Anthony Logerfo and bassist Corey McCormick for holding it together over such distance. The skills displayed by Promise Of The Real on this album tacitly query whether Young really needs to call again on his faithful old lieutenants, Crazy Horse. This younger, sprightlier outfit may not have the iconic heft of Crazy Horse but they offer Young the opportunity to cover more ground. It would be a shame if the Horse didn’t at least get the valedictory tour that guitarist “Poncho” Sampredro hoped would happen when we spoke to him for our January 2015 issue. “Most people turn a corner, Neil ricochets,” he told us. True, that. But as the farmyard chorus cluck, whinny, squawk and chirp their approval at the album’s close, it’s possible that Young is enjoying forward momentum with Promise Of The Real. Maybe the horse braying appreciatively during “Country Home” isn’t a metaphor, after all.

Neil Young is on the cover of the new issue of Uncut, which is UK shops from Tuesday, June 21