Nick Offerman, a 43-year-old actor with a splendid moustache and a key role in what might currently be America’s best sitcom, is an interesting guy. Last year, he wrote and starred in a video for the mediocre LA indie-punk band Fidlar, in which he goes on an extended urinating spree. 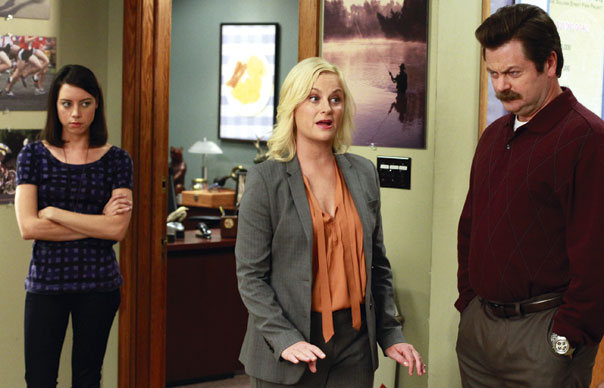 Nick Offerman, a 43-year-old actor with a splendid moustache and a key role in what might currently be America’s best sitcom, is an interesting guy. Last year, he wrote and starred in a video for the mediocre LA indie-punk band Fidlar, in which he goes on an extended urinating spree.

Throughout the clip, he wears a t-shirt emblazoned with the logo of the Offerman Wood Shop, which turns out to be an actual business where the actor and his colleagues “like to carve spoons, chainsaw stumps, plank canoes, keep our chisels sharp with stones, build pinball machines & fine furniture.” At www.offermanwoodshop.com, one can buy meat paddles ($47) and moustache combs ($75), as well as autographed copies of Offerman’s book, Paddle Your Own Canoe.

Among the topics addressed in Paddle Your Own Canoe are, apparently, “meat” and “manliness”, as well as Offerman’s wife, the actress Megan Mullally, who plays his terrifying ex from the libraries department in Parks And Recreation. At this point, fans of that series might find the line between real life and absurdist sitcom collapsing in on itself, given that Offerman’s character, Ron Swanson, is a local government employee with a love of meat and woodworking, and with a creed of male self-sufficiency that occasionally resembles a deadpan take on the 1990s “Iron John” cult.

Whether Offerman embraces Swanson’s Tea Partyish desire to eliminate more or less all government agencies and activity is, one suspects, less likely. In Parks And Recreation, Offerman quietly strives to undermine the meddling procedures of local government by filling his office – the Parks & Recreation department in a small Indiana town called Pawnee – with a selection of amusingly incompetent staffers. There is his personal assistant, April Ludgate (Aubrey Plaza), who has elevated hostile adolescent apathy to a high art; April’s husband Andy Dwyer (the brilliant Chris Pratt), a galumphing man-child who frequently pretends to be “Burt Macklin, FBI” and falls over a lot; and Tom Haverford (Aziz Ansari), a spectacularly deluded playa who calls cakes “big ol’ cookies” and noodles “long ass rice”. In all of this, though, Swanson is thwarted by his deputy, Leslie Knope (Saturday Night Live vet Amy Poehler, the ostensible star of the show), a hyper-efficient idealist whose love of her job is only equalled by her love for Pawnee.

Over several series (the sixth is currently being screened in the US), it would have been easy for Greg Daniels and Michael Schur, the architects of Parks And Recreation, to point up the antagonisms between Swanson, mildly sociopathic right-winger, and Knope, the noble busybody with a thing for legislative protocols (and, it transpires in Series Four, for Joe Biden). Indeed, that may have been the original plan judging by 2009’s first season, in which Knope was more brittle and irritating, and the whole endeavour resembled an attempt to cash in on the success of The Office (USA).

Ushered in by an episode about the marriage of two gay penguins, however, the second and third series of Parks And Recreation found Schur and Daniels radically upping their game. The mockumentary format remained, just about, but the characters – including significant recruits Rob Lowe and Adam Scott as Pawnee’s new city managers – became more likeable, and their vigorously repressed love for each other came to the fore. In many ways, Parks And Recreation is a classic piece of American schmaltz. It exalts the charm of an eccentric Midwestern town, fetishizes the honour and fulfilment that can be earned by serving one’s community, and features a cast of characters whose craven whimsies cannot entirely hide the fundamental goodness of heart that lies within.

Fortunately, the scenarios, jokes and personalities are so relentlessly entertaining – and, critically, the sentimentality almost always comes from a slightly skewed angle – that a lack of snarkier laughs seems pretty irrelevant. UK followers will already have seen the first three series on DVD (or, in the case of the first two, via an unheralded 2013 run on BBC4), and will already be well versed in Pawnee lore: the violent and racist town hall murals; local TV hosts Joan Callamezzo (predatory) and Perd Hapley (well, hapless); the cop played by Louis CK in apparent preparation for his American Hustle role; Andy’s risible grunge band, Mouse Rat; Swanson’s alter ego as smooth jazz saxman Duke Silver; the tragic, totemic miniature horse, Li’l Sebastian.

Series Four (shown in the US 2011-2012, and now released on DVD in the UK) fractionally tweaks the formula, as Leslie Knope embarks on a fraught electoral campaign for the town council, opposing a dim local rich kid (Paul Rudd, great as ever) and his substantially less dim electoral agent (Kathryn Hahn). The opportunities for farce remain manifold – an election rally at Pawnee ice rink in Episode 11 is an extended fantasia of pratfalls – and the brief lifespan of Tom’s Entertainment 720 company provides a fine showcase for one of the best of P&R’s many recurring characters, the imbecilic playboy Jean-Ralphio (Ben Schwartz).

There are emotional complexities, too, not least between Poehler’s character and Ben “Jello Shot” Wyatt, the oft-flummoxed nerd played by Adam Scott. Mostly, though, Parks And Recreation Series Four is a kind of madcap analogue to The West Wing (Bradley Whitford, that drama’s Josh Lyman, even makes a cameo), in which political intrigue, with all its cynicism and expediencies, is given a feelgood spin, and decency mostly endures.

That P&R achieves this without appearing disingenuous, or cloying, or even particularly twee, is remarkable. That it does so while packing in a bunch of subplots (Andy’s discovery of Women’s Studies is a personal highlight), bizarre local colour (the public radio host who favours “Lesbian Afro-Norwegian Funk Duo” Nefertiti’s Fjord is, you’ll note, Dan “Homer Simpson” Castellanata), and the odd auspicious guest director (Nicole Holofcener helms Episode 8, “Smallest Park”) is nothing short of miraculous.
Ron Swanson, meanwhile, faces a triple threat from The Tammies: Tammy 2, his second ex-wife (Mullally), Tammy 1, his even more formidable first ex (Patricia Clarkson) and Tammy 0, his feral mother (Paula Pell). His reward for such an ordeal comes, eventually, in Episode 18. Too staunch to brag about a sexual conquest, the evidence of intercourse is clear for all his workmates to see: in a strong morning-after tradition, he wears his “Tiger Woods outfit”.