I wrote a long review of the new Sun Kil Moon album, "Among The Leaves", in the latest edition of Uncut. This is the unedited version of the email interview I conducted with Mark Kozelek that runs alongside the piece. Pretty funny and revealing, I think, not unlike his new album. 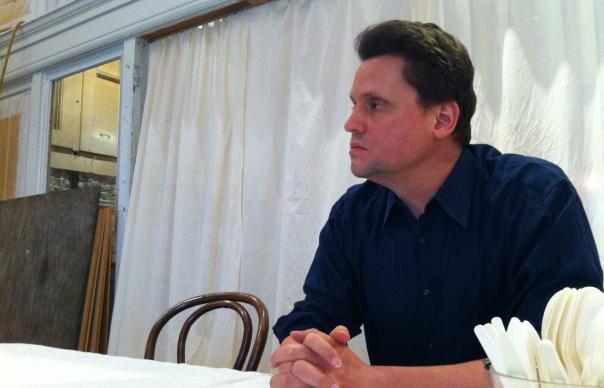 I wrote a long review of the new Sun Kil Moon album, “Among The Leaves”, in the latest edition of Uncut. This is the unedited version of the email interview I conducted with Mark Kozelek that runs alongside the piece. Pretty funny and revealing, I think, not unlike his new album.

Among The Leaves feels like a departure for you: the songs feel more spontaneous, more conversational, overtly funnier. Was it a conscious decision to do this – and if so, why?

My old approach just sort of died, at least for the time being. I was probably working on a song and realised I’d already written it 100 times. I’ve done the romantic approach to death and wanted to have a laugh this time. You tend to get a little sick of yourself after 20 years, unless you’re My Bloody Valentine! They seem to quite enjoy their early work, or is it their only work?

This album seems to be a rueful document of that life and of life as a songwriter. How do you look back on two decades as a touring musician?

As much as an uphill battle this business is, I’m glad to be still be in the game. Songwriting is what I do and there could be worse burdens to carry.

Though it’s a dangerous game to read anyone’s songs as entirely autobiographical, I suspect yours are more rooted in fact than most people’s. Would that be accurate?

There’s a little fiction for the sake of crafting a song. But all of it comes from somewhere – things I’ve lived, seen, whatever. Many of these songs are collages of experiences over the years. I’ve dated the junkie I sing about in ‘Elaine’ and was dumped by the woman who chose the rich guy over me in ‘The Winery.’ It was a long time ago, but it happened.

Beyond the funny lines, it also seems to be quite a sad record. Would I be right in thinking that “UK Blues” is more about your homesickness than your dislike of these places? Or do you really think that about London, Bristol, Manchester?

I’m homesick everywhere I go, but England has a negative effect on my spirit to a profound degree. That trip from Heathrow into London is worse than the flight over there. It’s just so grey and I’m not a pub person and the traffic in London gives me a heart attack. It’s not a comforting place on any level, to me.

There are also points where you describe the creative process as a “chore”, “Songwriting’s lonely, songwriting hurts, a relentless itch…” Do you think that being a songwriter is a kind of curse?

Absolutely. Songwriting isn’t a choice. You’re either called upon to bear the burden, or you’re not. It’s not all fun and games. Read any autobiography about any successful songwriter, and you’ll see a lot of drug abuse, divorce, lawsuits, and friends who died along the way. I’m off to Australia, Poland, Japan, Korea, and China in the next two months, you think my girlfriend is happy about that? If you’re a working musician, there’s always tension in your life, always.

A lot of people who haven’t listened to your songs so closely might be surprised by the content of Among The Leaves; by the wit and the promiscuity. Do you think you’ve been misunderstood over the years?

The promiscuity shouldn’t come as a big surprise, I’ve been open about that in my writing for years, I had a song called ‘Mistress’ 20 years ago, remember? Anyone who has been following me for a while knows I’m a human being. I’m pretty relaxed on stage, make jokes, whatever. I was pretty guarded in those early years, stood there like a cardboard cut-out, and there’s a stigma that still hangs around a little. But the wit and the other stuff, it was always there, you just gotta listen close. I do all the things the other musicians do, sign autographs, pose for photos, I’m a pretty nice guy, not hard to approach.

Though I should say, I do remember a hell of a lot of guys in tennis shoes at the shows 20 years ago, in London at least…

Oh fuck yes. I make cracks about it at every show. How can I not? I can’t count the amount of shows that the entire front row consists of lonely looking middle-aged dudes and maybe a woman who looks like one! Fucking depressing! I’m like ‘don’t any of you have girlfriends?’ They sit there holding their phone likes its their only card in life. I mean, I’m glad they pay the ticket, but it’s a very uninspiring front row to look at, honestly.

Looking back over those 20 years, which records are you most proud of, and why?

Admiral Fell Promises, hands down. Bury me with that one. That album is me at my best, my most focused. It’s cohesive, beautiful and my playing was inspired by the legendary, Andres Segovia.

Are you pleased with the way things have turned out, on the whole?

Yes. I did an interview for a book on 4AD recently, and it took me back 20 years. That ‘Rollercoaster’ album cover was very prophetic in its own way. My career has been a rollercoaster of highs and lows. But I’m looking at the Golden Gate Bridge as we speak, meeting my absolutely beautiful girlfriend for lunch in an hour, and I got a little money in the bank! Life could be worse.