Mark E Smith’s final Uncut interview: “The Fall is like a Nazi organisation…”

Smith discusses The Fall past and present, America and art in this feature from September 2017 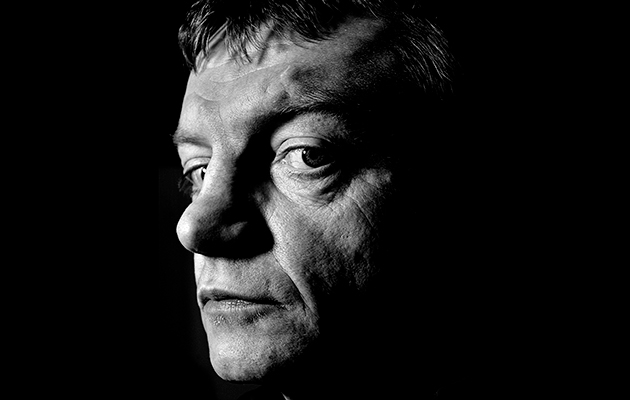 A quiet drink with MARK E SMITH in his favourite Manchester pub. There are lengthy ruminations on the current Fall lineup’s excellence, and even lengthier ones on the incompetence of their predecessors. Also: the Vorticists, the BBC, Jane Austen, and the problems with Welsh people… “Come on, Mark,” asks a tenacious TOM PINNOCK, “are you really that horrible?”

“There are some fucking weird people around, aren’t there?” says Mark E Smith, taking a sip of his double Jameson’s in Manchester’s Crown & Kettle public house. He’s talking about musicians, a group of people he famously detests. “I suppose you meet a lot of ’em. I’m not one to talk, but a lot of them can’t give it up, can they?”

As he admits, few artists have doggedly pursued such a singular, and lengthy, mission as that of the only constant member of The Fall. With the departure of synth player – and former Mrs Smith – Elena Poulou, The Fall have been reduced to their core of guitarist Pete Greenway, drummer Kieron Melling and bassist Dave Spurr; they’ve been with Smith for over a decade, and, in the world of The Fall, that’s a lifetime.

“The group are very well, actually,” insists Smith. “Never been better. That’s why I wanna crack on a bit [with another new album]. They’re really fucking excellent. The great thing about my lads is the rhythm section, Dave and Kieron, they were brought up from 15, 16, playing ’70s and ’80s hits as a duo. So they can play. They can play ‘Paranoid’. They can play ‘In The Year 2525’. No, really!”

On one hand, Mark E Smith in 2017 is surprisingly mellow and friendly – during Uncut’s afternoon in the Crown & Kettle, he drinks less than his reputation might suggest (he chooses a Welsh IPA to go with his double whiskey, before moving on to Duvel), and is often strikingly funny, whether discussing artist Wyndham Lewis or Jools Holland. After the interview, Smith even takes Uncut out to another pub for a few more rounds. Like the Lancashire weather, however, Smith’s mood can turn suddenly: he’ll talk about the past, but only on his own terms, and will happily lambast all manner of subjects, from the BBC and the destruction of Victorian latticework to today’s young groups.

“My dad thought I was fucking mentally ill,” he says, remembering when he first formed The Fall in Prestwich in 1976. “[But now] they’ve been to rock college, and you can see it in the way they play. You used to send your son into the army or the clergy, now you send them into a rock group. If I go and see bands now, there’s more members of the group than there is audience. It’s all their aunties and their sisters, who’ve asked me to come down. You wish them well, but it’s quite weird.”

As the band’s 60-odd former members would likely attest, Smith remains a man it would be wise not to cross, with his memory as sharp as his tongue, and his deepest wrath reserved for ex-Fall musicians and their ‘tell-all’ memoirs.

“If you get my curse, man, it doesn’t fucking come back,” he mutters, finishing his whiskey. “There’s summat about The Fall, it just destroys…”

This month, 41 years into a career of sublime turmoil, Smith’s group release their 32nd studio album, New Facts Emerge, a storming set of heavy grooves, with their leader growling impressionistically over a barrage of guitar. Uncut tells Smith that it’s perhaps the strongest Fall record since 2010’s Your Future Our Clutter. “Do you like it? Ah, I’m glad,” he says. “I haven’t heard it complete yet, I got a bit fed up with it. I had so many arguments with the cutting engineer and all that. But I know when it’s right, I’ve had it in my head for so long. I’ve got ideas for another half an LP now.”

The centrepiece of New Facts… is the nine-minute “Couples Vs Jobless Mid-30s”, an unhinged multi-part suite that veers from lumbering rock grooves complete with manic laughter to sections of chanting and detuned Mellotron. “We went to a studio in Castleford, Yorkshire,” says Smith, explaining the song’s creation, “which funnily enough is where we did Your Future Our Clutter. It’s a big, fuck-off heavy metal studio. I left them in there for a week or so.”

You just left the group there and went away?
No, not off on holiday! Stuff like “Couples…”, that’s them having fun. So we got about seven songs out of it [at Castleford]. “Couples…” is like three or four of their tunes savaged! They were trying to do something about Eagles Of Death Metal, and about heavy metal groups. I said, “That’s not on”, because they were the group in Paris, weren’t they? So I changed it to all this. I enjoy it. It fucks your head up. The more annoyed the engineers get, I tend to carry on. Especially with all this technology now, engineers always fiddle about with the filters and that, make it a bit tamer. But with something like [closer] “Nine Out Of Ten”, the fucking best version is obviously the most earache one.

The version I’ve heard is pretty earachey.
Good, good. It’s the right one, then! I love shit like that, when it’s a bit painful.

Are Cherry Red good to work with?
Yeah, they’re all right, if you’re not dead [laughs].

What was that “Masquerade” single they put out for Record Store Day?
Fucking yeah, it was weird – and don’t think they didn’t get told about that. The fucking horrible Fall net – this bunch of old fucking fellas who harp on about the old days – they got a test pressing of it, and I didn’t even know it was coming out! So I had a fucking word with them about that.

The title of [New Facts’] “Victoria Train Station Massacre” has proved quite controversial after the Manchester bombing. Was it like “Powder Keg”, a kind of precog thing? [MES claims “Powder Keg”, released on June 10, 1996, was about the Arndale Centre bombing, which took place five days later].
Probably, I don’t know. I’m actually very fond of the architecture of Victoria Station, but it’s all been trashed to fuck, and that’s what the song’s about. You know all that beautiful Victorian latticework, like they have at Paddington? They ripped it all off. And you know why? Because the students coming to Manchester wanted to have access to north Manchester [pauses]. We don’t want ’em here [laughs]! So they put this big canvas canopy up, and about six months ago it fell on all the passengers in the rush hour. There’s summat wrong with Manchester, they can’t leave anything fucking alone.

I see The Fall are off to America in September, for a New York residency.
I’m looking forward to it. We’ve got a massive fanbase there, but we haven’t been for a bit. It’s more fanatical than it ever was, the fanbase – those New York shows sold out, 10 dates. They’re loyal, American fans. It’s a long time since we’ve been, last time was with the Dudes, the American group for [2007 album] Reformation Post TLC.

Are you still in touch with the Dudes?
Yeah. Tim [Presley]’s lost in Wales, int’he? I warned him. I bet they fuckin’ ate him or summat. I saw him at the Green Man festival and he says, “I’m off to Cardiff for two weeks.” I said, “Don’t fucking go. The women are like fucking demons.” And he was like, “Oh, Mark…” ’Cos I’m always filling them with these horror stories about Britain, but they never believe me. You can’t warn guitarists, though.

I bet your American fans are younger than the ones over here?
Yeah, they’re all from this century. They’re all from Reformation time, it’s very strange.

That album does feel like a watershed, in some ways.
Well, thank God, yeah. I’d like to think that. I was playing it a bit back and it sounds fucking great. There are bits where it gets divisive, even for me.