Given today's news about the Led Zeppelin DVD, it occurred to me that this might be worth putting online: my review of the 2007 show... 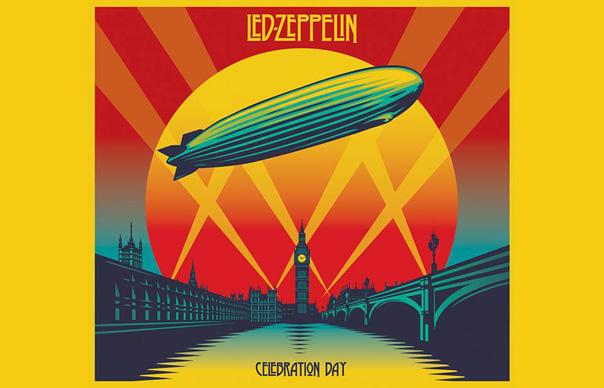 Given today’s news about the Led Zeppelin DVD, it occurred to me that this might be worth putting online: my review of the 2007 show…

It is ten to nine in the O2 Arena. The man in front of me in Block 111, Row S is jabbing agitatedly at his Blackberry. “Jimmy Page is about to walk onstage,” I can read over his shoulder, “I cannot think about insurance right now.”

Who, right now, can think of anything else? We’ve been carried here to the old Millennium Dome on a tidal wave of hyperbole that – even in these reunion-saturated times – feels pretty much unprecedented. The number of people who applied for tickets, the papers tell us, is somewhere between one million and the population of the entire planet.

I am sat roughly between Greg Dyke and Marilyn Manson, surrounded by many American music business types who look like they did powerful and sinister things in the 1970s. My colleagues have spotted the Gallaghers, U2, Paul McCartney, David Gilmour, Dave Grohl, Richard Ashcroft, Mick Jagger, the Arctic Monkeys, Bob Geldof, Kevin Shields, Kate Moss and Naomi Campbell, Pink, Jeff Beck, Brian May and Roger Taylor, Nile Rodgers, Benicio Del Toro, Gene Simmons, someone who might have been Martin O’Neill, and Joe Elliott out of Def Leppard. Foreigner, plus children’s choir, have just finished “I Wanna Know What Love Is”. It’s all tremendously exciting.

Before Robert Plant, Jimmy Page and John Paul Jones started talking to every publication extant about this show in vague, tantalising terms, before the show was even officially announced, Plant told Uncut’s editor, “There’ll be one show, and that’ll be it. We need to do one last great show. Because we’ve done some shows, and they’ve been crap.”

By the time you read this, Led Zeppelin might have announced an epic world tour for 2008, making Plant’s words sound like the manoeuvring of an artist with an exceptional solo album to flog. But if this Ahmet Ertegun tribute show turns out to be the solitary reunion, I suspect even a proud and fastidious man like Plant might be contented.

He begins brilliantly, with a pointed “Good Times Bad Times” and much stuff about days of youth, doing things the best he can and, of course, “No matter how I try, I find my way to do the same old jam.” Unlike many of his contemporaries, Plant has found a way of combining rock heroics with a dignified gravity. When he swings his microphone stand, he looks like a Shakespearean king wielding a broadsword, not a 59-year-old acting out a pantomime of his youth.

Jimmy Page, though, is not initially so impressive. The razored attack, the brute delicacy of his playing seems to have been lost on “Good Times Bad Times” and the song which follows it, “Ramble On”, and I’m reminded of his sloppy performances on various ‘90s projects. If Plant has long been reluctant to capitalise on the Zeppelin legacy, Page’s attachment to it has sometimes looked rather needy, and there’s a curious irony that he might prove to be a weak link next to the neat, intuitive John Paul Jones and stoical Jason Bonham.

But these are not, historically, men with much of a tolerance for imperfection. And when “Black Dog” lifts off, we can belatedly see and hear the real health of Led Zeppelin in 2007. The sound quality radically improves – as if the enraged ghost of Peter Grant has made his presence felt at the mixing desk – and Page’s rutting, evil riffs now have the clarity to match their intensity.

“Black Dog” is an object lesson in how to make something magisterial out of the basest desires. And this is also the way Zeppelin tackle “In My Time Of Dying”, “Nobody’s Fault But Mine”, “Since I’ve Been Loving You” and “Dazed And Confused”, the slow blues which wire them into a continuum stretching deep into rock’s prehistory.

Plant is deferential in introducing these tunes, mentioning Blind Willie Johnson and claiming they first heard “Nobody’s Fault. . .” “in a church in Mississippi about 1932”. But for Page, this is the music which he can handle best, that he can transform from the heartsong of the disenfranchised into the conqueror’s battle hymn. At times, even Plant seems impressed, bent towards him indulgently during one wrenching solo in “Since I’ve Been Loving You”. They smile plenty, too, and the pleasure these intimidating men take in their own music – and, amazingly, each other’s company – is striking.

Just outside the auditorium, meanwhile, Marilyn Manson, his girlfriend Evan Rachel Wood, and their minder appear to be having a mild contretemps about who is going to the bar. In the toilets, a burly Canadian is demanding that Harvey Goldsmith should have included catheters as part of the ticket deal, and conducting an impromptu vox pop with his fellow urinators. They have come from New York, Switzerland and Stamford Hill, and mainly seem to be friends of friends of Jason Bonham. Bonham, I’m told later, is nervous – no wonder, when it feels like everyone he’s ever met has turned up to the show.

He does fine, though, as does John Paul Jones; discreet, urbane, a revelation when he gets behind the keyboards. “Kashmir” has a martial grandeur you might expect, but an airing for the prickly, manic funk of “Trampled Under Foot”, with Jones in overdrive, is unexpected and thrilling. It’s on songs like this, alongside “The Song Remains The Same”, a ravishing “No Quarter” and a densely psychedelic “Misty Mountain Hop”, that Page’s enduring skill comes to the fore. He can dust down the doubleneck guitar for “Stairway To Heaven” (performed with staunch ardour by Plant), saw away viscerally with the e-bow during “Dazed And Confused”. But it’s the opulent complexity of Zeppelin in their imperial phase which is the biggest challenge, and Page acquits himself admirably.

By the encores of “Whole Lotta Love” – and what a strange song that remains, with its wildly avant-garde breakdown – and “Rock’n’Roll”, Page no longer looks regal. The dark lord of legend has been replaced by a ruffled, sweating, radiantly happy man in his early sixties, the surprisingly human face of this monstrous music. Plant and Jones are nearby, and the weird tensions that must have surfaced during the protracted rehearsal period – the singer alludes at one point to the “thousands of emotions” they’ve experienced over the past month or two – seem to have evaporated.

Would those animosities resurface again during an extended tour? Wouldn’t Plant rather be sharing a stage with Alison Krauss, even though he clearly still has the lungs and the bravado to sing rock’n’roll and bring the sky down? These, I guess, are the hypotheticals taxing the minds of millions of people across the world who are following the gig via news reports on uncut.co.uk and our sister site, nme.com.

For me, though, it’s pretty easy to be smug and unconcerned about what the future holds. I have, after all, just seen Led Zeppelin: not the slapdash, warring clan of previous reunions, but a band who, implausibly, sound once again like the greatest rock band in the world. Like many artists of their age – Dylan, Neil, even the Stones – there’s an urgency here, as if the immortals have finally become aware of their own mortality. Disregarding the money for a moment, the need for these brilliant musicians to tidy up their stories for posterity, to remind the world of their greatness, suddenly seems very pressing.

Tonight, Jimmy Page, John Paul Jones and, especially, Robert Plant can sleep easy in the knowledge that they’ve done just that. For the time being, at least, Led Zeppelin’s legend has the happy ending it always deserved.