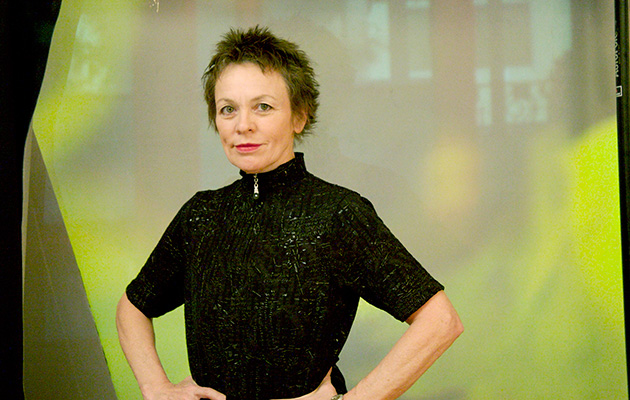 To London’s glamorous South Bank, then, for a lunchtime treat: Laurie Anderson in conversation with Brian Eno, as part of the London Film Festival’s new LFF Connects series. Ostensibly, the starting point for this encounter is Heart Of The Dog – Anderson’s first film since 1986’s Home Of The Brave – which is in turn complimented by Eno’s own film and TV work. But, really, this is an opportunity to enjoy a lively and digressive back-and-forth between two old friends and collaborators that covers the therapeutic qualities of music on dogs, Russian propaganda art, the Tibetan Book of the Dead and “liquid sound”. Early on, Anderson and Eno agree they both like films that don’t necessarily follow conventional linear structures – preferring what Eno describes as “the ongoing textures of the semi-narrative”. A good description, it transpires, for their musings here today.

The not entirely unexpected upshot is that this hour-long event feels rather like an informal natter between two tuned-in college professors. Anderson has a slight tendency to let her sentences drift off, as if she’s suddenly thought of something slightly more interesting to think about. Eno, meanwhile, holds his line thought more assiduously. They are both endearingly funny. At one point, Eno mentions a recent exhibition of his in Frankfurt that Anderson had visited while the installation’s sound was still in progress. What kind of music was it, she asks. “Ah, typical Brian Eno stuff,” he deadpans.

Anderson and Eno’s collaborative relationship began in the Nineties with Anderson’s Bright Red album. Eno recalls how working on that album altered his production method. Traditionally, mixing an album began with the rhythm section, laying down a landscape on top of which the vocals were placed; fascinated by Anderson’s voice, Eno decided to upend the process and begin with her voice and then build instruments around her; a technique he has continued to this day. Listening back to the songs from that era, meanwhile, Anderson explains she finds them “floaty and open in a way I had forgotten”.

Similarly, Eno – never known for looking back on his former achievements – surprisingly admits to experiencing a “nostalgic glow” around some of the music he made during the 1970s. For instance, he reveals he recently found an envelope of track sheets from his second album, 1974’s Taking Tiger Mountain (By Strategy). Back then, he was recording on 16-track equipment and he describes his wonder at discovering that his charts accounted for only half that number. Now, he adds, there are 120 tracks available in recording sessions. Perhaps if you wanted to try and tease any threads from their meandering discussion, it might be the way in which these two artists, who first began working in analogue musical environments, have successfully navigated their way through the digital revolution and beyond.

There are revelations, too. Eno explains that he enjoys working on his music while travelling by rail (“Music For Trains?” asks Anderson). We learn, too, that Anderson’s grandmother deployed some next-level millinery skills during her time as a missionary in Japan. There are more serious considerations, of course. These are both artists who enjoy working unmediated on a small level – “If you don’t think there’s a set of rules, it’s all fine,” notes Eno, though that doesn’t factor in his presumably lucrative production duties for U2 and Coldplay. During an audience Q&A, they are asked which current artists they admire. Anderson cites the films of Guy Maddin – particularly his comedy The Saddest Music In The World – while Eno explains he has recently finished David Graeber’s anthropological study, The Utopia Of Rules. He specifically mentions the closing chapter: a study of what Eno describes as the “goth romances” of Game Of Thrones and Dungeons And Dragons. It loops back to a comment Eno made earlier, about how he used to turn the sound down on the TV set and put on a record at random instead; it would often make the experience “more interesting than the programme makers intended”. Nowadays, Eno does not own a television set.

Admittedly, it’s a lot to digest over lunch. But in between the ideasjams, there are jokes. At one point, Eno recounts an incident that occurred when he was living in New York. One day, he walked into a crowded store and, at the top of his voice, asked whether they sold rubbers. “For your pencil?” asks Anderson dryly.

The soundtrack for Heart Of A Dog is released by Nonesuch Records on October 23. You can pre-order it from Amazon.co.uk by clicking here