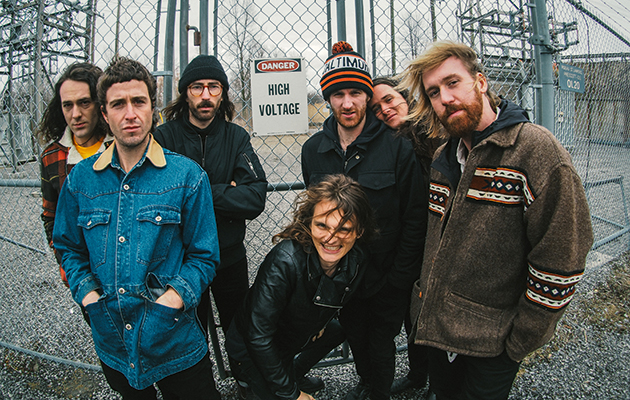 Singer-songwriter Fraser A Gorman, who played in a high school band in Geelong with Craig and Mackenzie, tells Uncut it was standard practice for his peers to have 5 to 10 bands on the go. “There isn’t the same vast touring opportunities that are available in America or Europe,” he notes. “So musicians from Australia and New Zealand seem to congregate in Melbourne and stick together and create a community. From the outside looking in, it seems like a giant pool of great musicians just hanging out and making music together when the reality is that most of them can’t afford to leave or go too far for very long!”

For the Gizzard crew, an early high/low point arrived during an ill-advised dinner-hour gig before a particularly unappreciative audience. “I’d broken five out of my six guitar strings, which just seems so impossible,” says Mackenzie. “We got a few boos when we ended the show. Then this guy came up to the stage. I thought, ‘Cool, this guy is actually going to give us some encouraging feedback – that’s nice!’ And he said, ‘That was the worst show I’ve ever seen. You guys will never play a stadium.’”

“I never even envisioned us playing a stadium,” says Mackenzie. “But he did spur us on without knowing it.”

In another leap forward in 2014, they won an AU$50,000 music grant and used it to finance their first trip to America. When not attracting buzz in Brooklyn and recording part of 2015’s Papier Mâché Dream Balloon at Daptone Studios, they holed up in a cabin in upstate New York, where Mackenzie deftly avoided getting eaten by a bear.

Yet they really caught fire on last year’s Nonagon Infinity, a collection of full-throttle space-rockers that are ingeniously and maddeningly constructed as an infinite loop. “That record was hard to make in a lot of ways,” says Mackenzie. “We’re happy with how it turned out, but it kind of made me go insane.” Reflecting the songs’ fantastical characters and settings, the videos for “Gamma Knife” and “People-Vultures” enhanced the music’s crackpot appeal with no-budget homages to Alejandro Jodorowsky and Japanese tokusatu. After two years of relentless recording and touring, they planned to have a breather. As usual, things didn’t turn out that way. Says McKenzie, “I was like, ‘Damn, we’ve got so many good ideas – we’ve got to keep doing stuff.’ So that’s where the idea of making five albums came from.”

“You said four originally,” adds Moore, who runs the band’s label Flightless out of the same Melbourne warehouse that houses their studio. “Why did you then say five?”

“I was just taking the piss out of myself,” Mackenzie admits, sparking a round of laughter.

A deep dive into Mackenzie’s love of Turkish psych-rocker Erkin Koray and non-Western modes, Flying Microtonal Banana arrived in February. Then came Murder Of The Universe, a heavy-duty triptych of tales with narration by their friend Leah Senior and a computer text-to-speech program, in June. A mellower set of collaborations with the American band Mild High Club, Sketches Of Brunswick East came out in August. As for the rest, well….

“Number four is not finished yet,” says Mackenzie. “It’s coming along, but it needs another month. We might not get the fifth finished. I hope we will… but we’ll see.”

Moore says they’ve been discussing a backup scenario. “Maybe it’ll be the very last minute of the year and we’ll put it out on Bandcamp.”

“It might come to that,” says Mackenzie sheepishly. They’ll likely be forgiven if they miss the deadline. For Gorman, King Gizzard’s discipline and creativity all demonstrate another advantage that Australian bands derive from their isolation, which is that you “need to be really fucking good” to make the world notice. As he says, “You gotta try hard when you live in the middle of nowhere.”