It would be nice to pretend otherwise, but I’m far from an expert on medieval lute music. A few years ago, however, a strong enthusiasm for the British guitarist James Blackshaw lead me to an album he’d made with a Dutch lute player – lutenist, apparently – called Jozef Van Wissem. 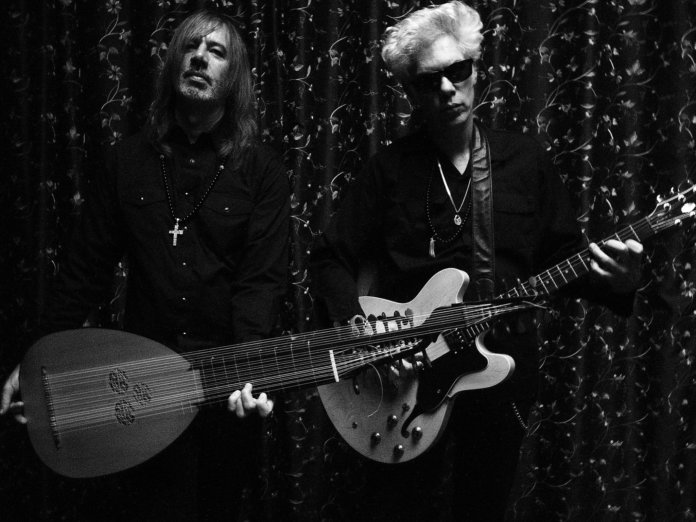 It would be nice to pretend otherwise, but I’m far from an expert on medieval lute music. A few years ago, however, a strong enthusiasm for the British guitarist James Blackshaw lead me to an album he’d made with a Dutch lute player – lutenist, apparently – called Jozef Van Wissem.

Blackshaw and Van Wissem called themselves Brethren Of The Free Spirit, and the album, “All Things Are From Him, Through Him And In Him”, which I described at the time as “a series of intense duets that owe as much to the graceful formalities of modern classical music as they do the patterns of folk and its renaissance antecedents. Like all Blackshaw projects, it has a sort of warm, concentrated intensity to it, an intangible character that makes this music much more approachable than a sketchy description like this might suggest.”

Subsequently, I’ve heard some of Van Wissem’s solo jams – though jam seems incredibly inaccurate here – most recently “The Joy That Never Ends”. Yesterday, though, a bundle of new downloads came from the Important label, including Blackshaw’s ravishing latest, “Love Is The Plan, The Plan Is Death” and a new one from Van Wissem, this time in conjunction with the guitarist (and of course film director) Jim Jarmusch).

While Jarmusch has obviously worked with musicians in many of his films, I can’t say I know anything about his own music. “Concerning The Entrance Into Eternity” mostly seems to be holding tightly to Van Wissem’s usual game, with incredibly stately progressions and, as the title suggests, a preoccupation with a distinctly mystical strand of Christianity. That’s corroborated by notes which reveal some of the song titles have been drawn from Swedenborg, and the spoken word piece read by Jarmusch on “He Is Hanging By His Shiny Arms, His Heart An Open Wound With Love”, is from St John Of The Cross (though whether Van Wissem’s music is motivated by an actual faith, or by an idea of the devotional, I couldn’t say).

Anyhow, Jarmusch predominantly moves stealthily in the background, shading out Van Wissem’s lute with empathetic acoustic chimes or a thicker, feedback-heavy electric tone which recalls Neil Young’s “Deadman” soundtrack (check out “Continuation Of The Last Judgement” and “The Sun Of The Natural World Is Pure Fire” especially). Often, the mix is reminiscent of the Ali Farka Toure and Toumani Diabaté sessions, especially the “Ali And Toumani” set where Diabaté’s kora (as ringing, clean and elevating as Van Wissem’s lute) took gentle precedence. A beautiful record, I think.