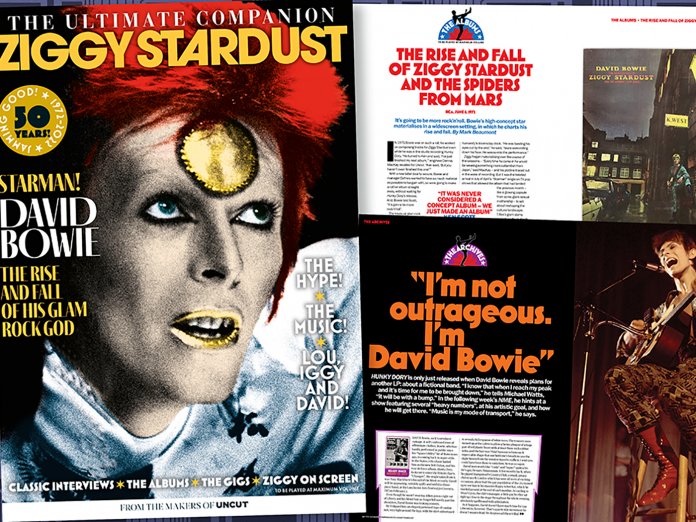 If you happened to be looking for the precise moment at which the stars came into alignment for David Bowie in 1972, there are plenty of occasions to choose from. It could be the point where, arriving on a plane into Los Angeles, the name “Ziggy Stardust” occurs to him for the first time. Whole books have been written on the hard to challenge notion that lightning finally strikes for Bowie (and an entire TV viewing population) after the performance of “Starman” on Top Of The Pops on July 6th.

It could be though, that the essence of Ziggy/Bowie’s mercurial genius presented itself a little earlier, and in a comparatively private space – the studio. Such was the roll he was on, even after having written two albums and a new single, when Bowie heard that Mott The Hoople were on the point of breaking up, he attempted to dissuade them by offering them a song. Had he given up when Mott’s “Overend” Watts politely declined “Suffragette City”, then music would be at least one glam rock anthem poorer.

As it was, Bowie phoned Watts back three hours later with a different new song. In the autumn of 1972, Mott’s Ian Hunter recalled the moment for NME. “In that three hours he’s written “All The Young Dudes”. “He said, ‘if you want to split, then split – but please do this number first’.”

“All The Young Dudes”, which Bowie played to Mott at a London studio in April, wasn’t only a great song, but an anthem for a mustering cohort of outsiders who had recognised each other at T Rex concerts, and had since looked for thrills in the charts and new leaders in the likes of Alice Cooper, and latterly, David Bowie. In the singles charts of August 1972, Mott’s version of “All The Young Dudes” leapfrogged novelty pop offerings from Terry Dactyl and The Dinosaurs, Hawkwind, even Bowie’s own “Starman” to arrive number three.

It was a glam rock summer, the chart filled with Slade and Sweet, and Bowie had made sure that Ziggy was at its heart. In this new magazine, here to celebrate the 50th anniversary of Bowie’s unveiling of his alien rocker persona in late January 1972, you’ll read the story of his birth, rise, and eventual suicide written in compelling new terms by Uncut’s Stephen Troussé. We’ve dug deep to uncover lesser-spotted gems from our archive of witty, insightful Bowie interviews from the period, and worked up new features which chart the music from the forming of the Spiders in 1970 to their disbanding after Pin Ups and The 1980 Floor Show in late 1973.

From the faltering steps of the Hype at the Roundhouse in 1970 to Ziggy’s devastating goodbye at the Hammersmith Odeon, and the immediate aftermath, it’s clear that on some level Bowie always had a plan. Certainly, he was always a step ahead of his contemporaries.