The guitarist looks back at his old band's formative years 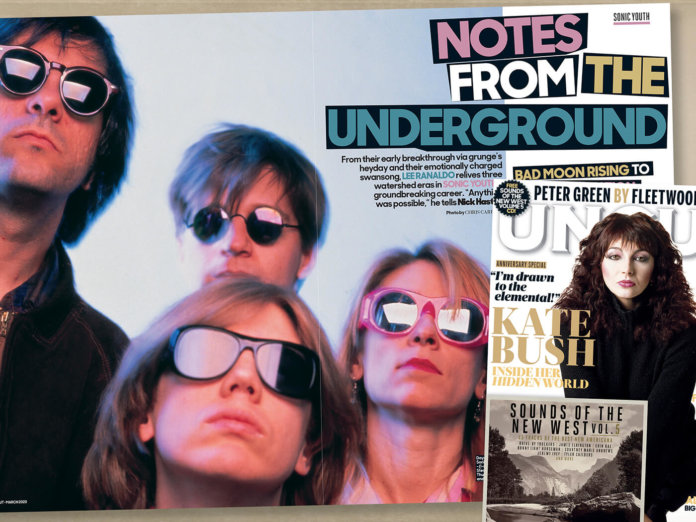 The current issue of Uncut – in shops now or available to buy online by clicking here – features an extensive interview with Sonic Youth’s Lee Ranaldo about three watershed eras in his beloved former band’s long and influential career – their early breakthrough, grunge’s heyday and their emotionally charged swansong.

In this extract, Ranaldo relives Sonic Youth’s formative years as they emerged from New York’s no wave scene.

“No wave was the most radical thing happening at that point. Groups like DNA weren’t trained in playing instruments at all. So it resulted in a kind of primitivism, in some ways an update on the earliest rock’n’roll. You didn’t need skill as much as have an idea for something to do. Sonic Youth, throughout our whole career, followed that philosophy. We forged our own technique to suit our own purposes. Anything was possible: beating the guitars with drumsticks, or Glenn [Branca] deciding to tune his guitars like a choir. It was very freeing.

“We had cheap guitars, which wouldn’t have stayed in tune, so we used them in other ways, partly inspired by the tunings people like Lou Reed and Glenn used. I came up learning alternate, open tunings from blues and folk players from Rev Gary Davis through to Joni Mitchell, David Crosby and Neil Young or Keith Richards. So a lot of that stuff seemed natural to us. We had no desire to play ‘normally’ anyway; we were free to use the instruments as noisemakers. Everybody I knew was experimenting. Nobody was trying to be in a normal band at that point. We only established some consistent guitar tunings when we made Bad Moon Rising. By then, we had solidified a working method, instead of just saying, ‘OK, we’ve got guitars… now what?

“I lived in downtown Manhattan then, in Tribeca – an industrial and artist’s zone that was desolate more than dangerous at night, which suited my temperament. Thurston and Kim lived on the Lower East Side on Eldridge Street. By the Bad Moon Rising period, Bob Bert, who drummed with us, lived across the river in Hoboken. We all worked day jobs. I worked for a sculptor in Chelsea. Kim worked in Todd’s Copy Shop. Thurston sold an ice-cream sandwich called the Chipwich out of a cart in Midtown. It wasn’t until after the first American tour for Bad Moon Rising that we were able to focus on music, even though we were still living ultra-modestly.

“One thing I always remember from the early days is that although we lived hand to mouth, we were essentially middle-class kids. We had a reverence for certain aspects of that middle-class lifestyle. Around the time of Bad Moon Rising, we used to rehearse in Mike Gira’s place on East 6th Street, which was a windowless bunker in the fucking scuzziest, most dangerous part of Lower Manhattan. That was the heart of junkie-land. It was scary after dark.

“The city was dirty and broken down, with abandoned buildings everywhere. There were people living in shitty situations, spending money on drugs instead of food. We were never deeply involved in that. At a certain point, I realised that people around us seemed to be sinking deeper into an insane lifestyle and the music was not keeping pace with that. But we always flipped that scenario. When we were home, we wanted something in the refrigerator and a clean place to live. We kept our lives sane so we could make the music as radical as possible.”

You can read much more from Lee Ranaldo in the latest issue of Uncut, out now with Kate Bush on the cover.