"Whenever you walk on stage – maximum hazard!" 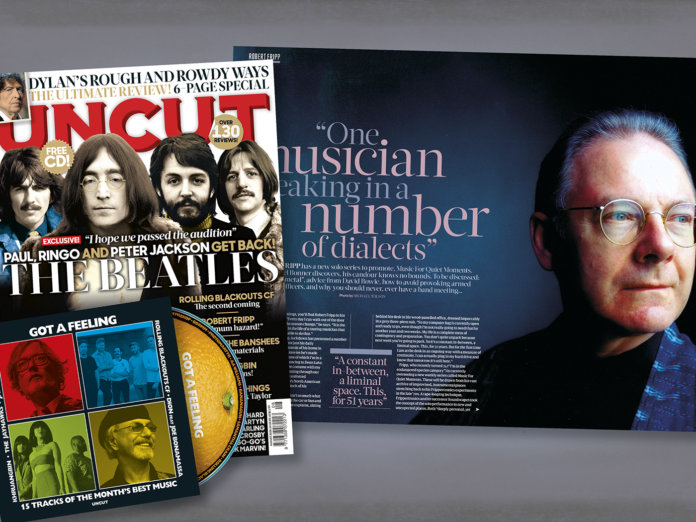 The latest issue of Uncut – in shops now or available to order online by clicking here – features an exclusive, in-depth interview with Robert Fripp, in which he talks with wit and candour to Michael Bonner about his new Music For Quiet Moments series, “Crimson metal”, advice from David Bowie, how to avoid provoking armed police officers, and why you should never, ever have a band meeting. Here’s an extract…

When did you begin to develop an interest in long-form, exploratory music?
Going back to 1967–1968, having just moved to 93 Brondesbury Road with Peter and Michael Giles, carrying my fuzz box with me, the guitar seemed to be a relatively limited musical palette. Multi-tracking with Peter Giles on an early Revox was about as far as I can move in the technology until about July 1972 – when I bumped into Brian Eno in the EG office at 63a King’s Road and he invited me round to his apartment. I don’t know why, but I took my guitar and pedalboard. I arrived and Eno said, “Would you like to come next door and plug in?” That was the beginning of Fripp & Eno. We recorded “The Heavenly Music Corporation” at home, in 40 minutes.

After you disbanded King Crimson in 1974, you presented yourself as a “small, independent, mobile and intelligent unit”, free to pursue experiments with Eno and others. That must have been quite appealing. Fewer people to disagree with, presumably?
Oh, that’s a wonderfully positive outlook on that one! Well, how about including members of the audience? Are they all going to agree with you? I can give you quite a few examples. Whenever you walk on stage – maximum hazard! – you can never control an audience, and thank you for that. Increasingly, with technology in the ’90s and ’00s, artists, particularly in stadia events, have sought to control the performance of event – and some of it I understand because you have anywhere between 10,000 and 80,000 people getting pissy. It can be dangerous and I speak from experience of working in Italy in ’73 and ’74.

Why? What happened?
We were in Milan, in a stadium. The Maoist contingent in the audience smashed down all the glass entrance to get into the event, because music is free and for the people. The following night, because King Crimson were not about to give an encore, the Italian crowd, very angered, pulled out all the electrical cables and the police appeared at the front of the stage with machine-guns. King Crimson return to the stage. This is the adage of what do you do in a difficult situation, you keep playing – we will do an encore, crowd happy, hooray! Police with machine-guns leave the stage, Bill Bruford counts in, “One, two, three, four, bish.” However, let us remember the power had been pulled out. So all you have in the auditorium is an acoustic Bill Bruford, playing on his own whatever the encore piece might have been. In case this seems far-fetched, this is an everyday event in the professional life of King Crimson.

On the Frippertronics tours of ’79 and ’81, did you ever miss the camaraderie of being in a band?
Which camaraderie are you discussing, please?

A band as a collective with shared aim…
So, here you are – does the group share the same aim? And if not, then how do you continue the creative process and engagement with the others? One practical example, you embrace ambiguity by never, ever having a band meeting. If your band is going to break up, it is more likely to do it when having a band meeting. Quick thing, this is it, you’ve got music, musician, audience and industry. Robert’s role as, if you like, facilitator or convener within King Crimson; Robert is the only person within King Crimson that deals with all these terms, he’s in the middle.

Working within a group can be problematic. But what about the adrenaline, the excitement and the joy you share with people?
Hang on, hang on. So here is all this joy to share, yeah? Suppose one person thinks it’s all because of them? This is their joy because it’s all about them. And suppose two people in the band at the same time think it’s all about them… you see? In another context, though, working in a group with Eno, Bowie and Visconti, something is possible. But they don’t take it on the road. You go on the road, it’s very different.

What’s the best piece of advice Bowie ever gave you?
It was on the Scary Monsters session. The sessions began around midnight and I think it was “Up The Hill Backwards”. I said to David, “Any suggestions?” David said, “Think Ritchie Blackmore.” I knew exactly what David meant. So my playing was nothing like Ritchie Blackmore, but I knew what David meant – that was a direct piece of advice. Now, here’s another one, a wonderful piece of advice in the Bowie/Eno context. Overnight flight from New York to Frankfurt – first-class – then on to Berlin. Turning up at Hansa Studios at about quarter to six in the evening, with board and guitar. I said to David and to Brian, “Is there anything you’d like to play me?” Brian’s advice was, “Plug in.” So, having heard nothing, no words, plugged in, tape ran, one, two, three, four, and that was “Joe The Lion”. I’ve worked with other people who’ve said “plug in” and rolled the tape and expected me to work on the same level with them as I’d been fortunate enough to do with Bowie and Eno – and the result is not the same. Robert is, shall we say, the same, so what is different? Brian and David and Tony Visconti bring something to the party that not everyone does.

You can read much more from Robert Fripp in the August 2020 of Uncut, out now with The Beatles on the cover. For full details of the issue contents, go here.