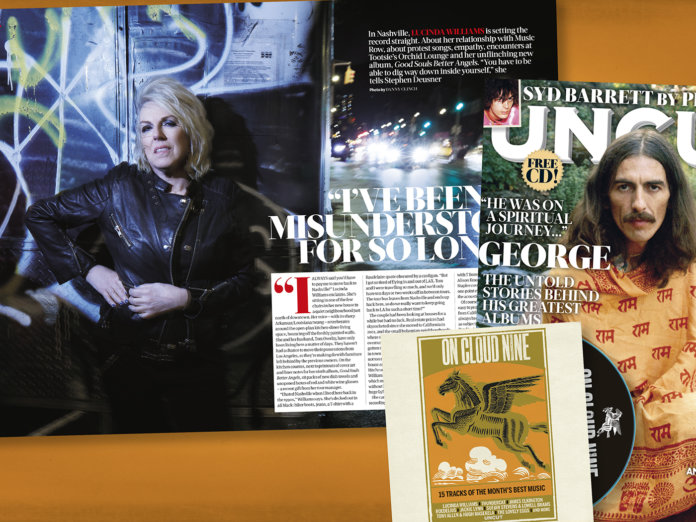 The latest issue of Uncut – which is in shops now or available to buy online by clicking here, with free P&P for the UK – features an in-depth interview with country-rock icon Lucinda Williams. In this extract from her wide-ranging conversation with Stephen Deusner, she discusses moving back to Nashville after a difficult period at the beginning of her career.

“What church do you go to?” That was the question Williams remembers dodging back when she lived in Nashville in the 1990s. “It wasn’t, ‘Do you go to church?’ It was, ‘What church do you go to?’” At the time the city was geared toward a very conservative brand of country music, with hat acts like Garth Brooks and Alan Jackson leading a country-pop crossover that left artists like Williams behind. “There was no-one wearing leather motorcycle jackets and biker boots.”

Williams’ time in Nashville was marked by rejection and frustration. Artists were covering her songs, but aside from Mary Chapin Carpenter’s version of “Passionate Kisses”, their labels weren’t pushing them as singles, mainly because radio programmers objected to lyrics like, “And the only thing I regret is I never kissed your mouth.”

After the release of Sweet Old World in 1992, it took six years to follow it up with Car Wheels On
A Gravel Road, during which time she recorded the album and then had to re-record it. It’s one of the most acclaimed albums of that decade, but it still didn’t ingratiate her in Nashville. “When I got nominated for a Grammy for ‘Get Right With God’ in 2001,” she says, “I decided to drive out to Los Angeles. In the back of my mind I was thinking
I might just stay there.”

Nearly 20 years later, the Nashville machine remains rigid and intractable, but Williams isn’t even trying to break in any more. “I don’t have to deal with the music industry now,” she says. “There’s still crap coming out of Nashville. There’s still stuff that annoys me, like four people getting songwriting credit on a song. Why does it take so many people to write a bad song? Tom’s like, ‘Honey, just ignore it.’ I’ll try. I guess I can’t have a perfect town. At least nobody is asking me what church I go to.”

Still, Nashville has been a readjustment for her. “I like the anonymity I had in LA,” she says. She does get recognised on the street more often here than out in California, and everybody she meets is somehow connected to the music industry. “Every time I take an Uber or a Lyft, the driver is a singer-songwriter. When they find out I’m a musician, they always want to know what kind of music I play.”

With her adventurous new album Good Souls Better Angels using blues and country as springboards into heavy rock, punk, rural psychedelica and even hip-hop, that’s become a difficult question to answer. “I feel like I’ve been misunderstood to such a degree for so long,” she reveals. “I started out on acoustic guitar doing folk songs, then I moved into Delta blues, but I was always listening to edgier stuff like The Doors and the Stones. I got locked into the singer-songwriter thing by default. When you’re first starting out, usually it’s just you and your guitar. You immediately get put into that category, but I’ve always loved all different kinds of music.”

You can read much more from Lucinda Williams in the new issue of Uncut, out now with George Harrison on the cover.