Kenney Jones on the Faces: “We were unmanageable!” 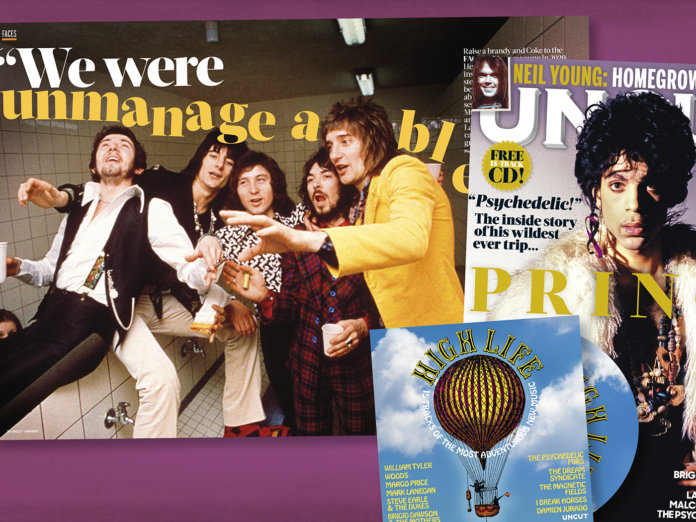 To celebrate the 50th anniversary of the Faces, the latest issue of Uncut – in shops now or available to buy online by clicking here – features an exclusive first-person account by the band’s drummer Kenney Jones, taking us inside the band’s tentative first steps, their rowdy peak and beyond. Rob Hughes hears revelations about the band’s first recording session, an encounter with Muhammad Ali in a hotel lobby and high times at the Goose Lake Festival. For now, here’s a taster…

“We made it in America before we made it back home. Which was very strange, because usually it’s the other way around. We discovered that the general feeling here was: ‘OK, entertain us then.’ So we kept on until people really got to know us. But people only really started to sit up and start listening after we’d broken in America.

“People said we were unmanageable. Some of the mischief was due to boredom creeping in on the road, because we were often away for three months at a time. Homesickness came into it, too. We had to live with each other a lot. I mean, we really got to know one another.

“The second album, Long Player [February 1971], is a reflection of how comfortable we all felt with one another. We didn’t get to the studio until around two in the afternoon for the recording sessions. Ronnie Lane would turn up about four, Woody at six, Mac about 6.30. By that time Rod and I, who’d already been there for a few hours, would be like [wearily], ‘Fucking hell.’ So to kill time we’d end up going down the pub, which meant that it would always be late when we finally got around to recording in the studio.

“It was very frustrating sometimes, when we went in to record, because I feel that we were working things out as we went along. We’d do a riff then see if we could make it work, rather than go in with a finished song. A few of them we’d already pre-written – like “Sweet Lady Mary” – but mostly they were done as we started playing. Musically, I think we could have done a lot better had we been more sober.

“As well as having a reputation as drinkers, we all shared the same humour. We were a bunch of piss-takers. [Manager] Billy Gaff was Irish, a lovely guy. But he could never have a serious group meeting with the Faces, as we’d be putting things on his head and throwing stuff. It meant he could never discuss anything. How he ever made any decisions, I’ll never know. Tony Toon was our publicist. We used to treat him the same way. I remember one of our group meetings round at Billy Gaff’s, who lived at the back of Shepherd Market. There was a club at the bottom and we all fancied a drink. It must’ve been around Christmas as there was a party on, with loads of streamers and music playing. We were all on brandy and Coke and it didn’t take too long for us to start dancing. Tony Toon was really getting into it, so we grabbed these streamers and threw them all over him. He was covered head to foot. As we were all dancing I went behind him, took out my lighter and lit the streamers. They went up like a candle: ‘Whoosh!’ All I remember is Tony running around going, ‘I’m on fire! I’m on fire!’

“John Peel was another who became one of us, in a sense. We did a lot of BBC sessions for him. He was great fun, he just loved the Faces. We loved him, we’d do anything for John. You could take the piss out of him and he would do the same.”

You can read much more from Kenney Jones – and some words from Rod too – in the new issue of Uncut, out now with Prince on the cover.