On the cusp of a new century, what does David Bowie do? Having plotted a dramatic course forward across four decades, he decides instead to revisit a number of songs from the earliest days of his career. But the album he records, called Toy, is consigned to Bowie's vaults, where it has been the subject of much intense speculation ever since. To celebrate its imminent release - 21 years late! - we bring you the definitive account of David Bowie's legendary lost album as told by Bowie's closest collaborators and confidants. “It’s a ghost album,” Tony Visconti tells Peter Watts. “I’m so glad people are now getting to hear it, because I think some of David’s finest work is on Toy.” 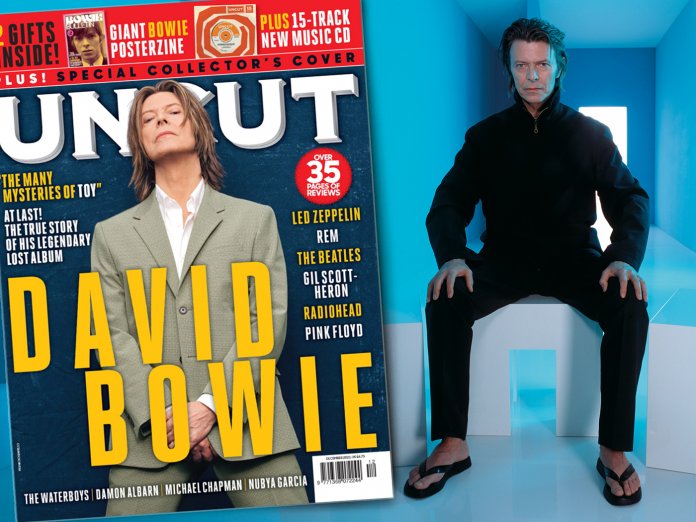 Manhattan Center, New York, August 1999. David Bowie is coming face to face with one of his former selves. But it’s not the Thin White Duke, Halloween Jack or Ziggy – but an earlier incarnation of Bowie, one almost nobody knows or has long since forgotten. The occasion is VH1 Storytellers, a show in which songwriters talk about and perform choice moments from their back catalogue. Among hits like Life On Mars? and China Girl, Bowie suddenly pulls out one of the first songs he wrote: an R&B thumper called Can’t Help Thinking About Me. He prefaces it with a lengthy impression of Steve Marriott – before confessing that the song contains “two of the worst lines I’ve ever written”. The audience laugh appreciatively. What no-one – perhaps not even Bowie himself – realises is that this brief detour back to 1965 will launch an unexpected and extended reckoning with Bowie’s past.

Accompanying Bowie on guitar in New York was Reeves Gabrels, Bowie’s musical right-hand man since 1988. It transpires that Gabrels has suggested Bowie give Can’t Help Thinking About Me a long- overdue airing. “I had it on a compilation record when I was about 14,” he tells Uncut. “You’d get three vinyl discs for a dollar if you sent in a coupon. They were like anthology records. I had a bunch of them as they were so affordable. I’d heard Can’t Help Thinking About Me almost before I knew anything else David had done. Then we were in Chung King Studios in New York mixing ‘hours…’ and drawing up the setlist for VH1 Storytellers. I said it as a joke. David paused and he thought and he said, ‘You know, that might be a good one.’ Next thing I knew, we were playing it.”

In fact, the enthusiastic reception to Can’t Help Thinking About Me encouraged Bowie to dig deeper, unearthing other lost songs including The London Boys and I Dig Everything. What sent him on this unexpected detour back to his pre-fame days? His love of the internet might have been partly responsible. “I must’ve had 743 singles come out before Space Oddity,” Bowie told Uncut in 1999. “And half of them daft as a brush. And the other half – well, there may have been potential, but only so much. Ha! But it’s kinda fun now, actually – I see sites on the internet where they study those areas very intimately. You can see them picking through the peppercorns of my manure pile. Looking for something that might indicate I had a future. They’re few and far between, but they have come up with some nuggets.”

When Mark Plati took over from Gabrels shortly after the VH1 show, he and Bowie decided to take Bowie’s lost “nuggets” and make what they called the ’60s album. Recorded immediately after Bowie’s triumphant June 2000 show at Glastonbury, Toy should have been Bowie’s first release of the incoming millennium – old skin for a new century. Instead, it was shelved – the victim of an unsympathetic label and Bowie’s own impatience. Now, 21 years later, Toy is finally appearing on the Brilliant Adventure boxset, which collects Bowie’s studio albums and additional material from 1992–2001, and then on Toy:Box in January, featuring Toy, outtakes and bonus material. These twice-lost arcana from another age are getting their moment in the sunshine, offering a glimpse into Bowie at the other end of his career; before, in some instances, he was even ‘Bowie’. “These songs give a little glimpse of his teenage soul,” says Emm Gryner, backing singer on Toy.

“Some of them were so old that they dated even before my time with him,” says Tony Visconti, who was drawn back into the Bowie fold during the Toy sessions. “I think many artists would love to go back and remake certain albums… This gave David the perfect opportunity to rework those old songs, which, from the beginning, proved that he was always a great songwriter. It meant he could go back and shine a light on his earlier stuff. It’s a bit of a ghost album, it’s a transitional album. And I’m so glad people are now getting to hear it, because I think some of David’s finest work is on Toy.”