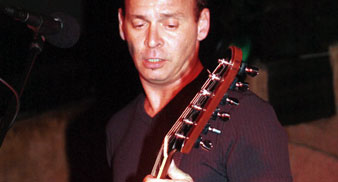 UNCUT: You’re performing a special concert with Sun Ra Arkestra this month. What kind of set can we expect?
KRAMER: Y’know, its hard to say. What we’re aiming at, is being true to the spirit of the MC5 and true to the spirit of experimentation and pure rock and roll. We’ve never been a band for doing things half heartedly and we don’t intent to start now just because we’re older. I just spoke to one of the Arkestra a few minutes ago and we’re looking at the possibility of joining each others sets at some point and coming together at the end.

Will you be playing any Arkestra compositions during DKT / MC5 set?
I’m certain we’ll be performing Starship which is an MC5 / Sun Ra composition from Kick Out The Jams, but we haven’t discussed the rest of the set yet. We’re just so excited about being able to pick up where we left off in the sixties and continue this effort to push music further and further into the future.

Sun Ra loved to dress up in wild, flamboyant costumes. Will you be dressing up for the show?
I hadn’t really thought about it, but now you’ve mentioned it we’ d better put some effort into that. After all, the whole point of this gig is to raise the bar and remind people that MC5 was always about participating in an on-going experiment in life and music and the possibilities of creative power. If you keep an open mind, great things can happen!

Your label suggested you might be accompanied by a few special guests…
We’ve been talking to a bunch of people including Handsome Dick Manitoba (The Dictators), Lisa Kekaula (Bellrays), Billy Duffy (The Cult) and Mick Jones (The Clash). Mick said he would love to do it, but it looks like he might not be able to make it because of his work schedule. One friend we definitely have joining us is David Thomas from Pere Ubu. I’ve asked him to compose something special for the event and I’ m confident he’ll come up with something wonderful.

Are there any plans to record the show for a live DVD or album?
We’ll be filming the whole thing, but we won’t know til afterwards if it’s any good or not. I’m keeping my fingers crossed it will be a fantastic night, but I can’t predict if we’ll manage to capture that on film or if someone ends up with their thumb over the lens. What I can tell you, is we’re making a conscious effort to archive everything we do from now on. If the London show goes well, there’s also a possibility we might do a similar thing in the States. We haven’t made any plans yet, but its a very compelling idea.

Why do you think free jazz has such a bad reputation?
I have a theory about this and the theory is that free jazz lost its focus when John Coltrane, Albert Ayler and Sun Ra died. They were the ones that really pushed the music to new places and when they went there was no-one left to carry the torch. Of course there were talented players like Archie Shepp, Pharaoh Sanders and Cecil Taylor, but they didn’t have the personality of Trane or Ra. Something else had to fill in the vacuum left by those artists and that is what I call the curse of Miles Davis. I love Miles, but unfortunately his cool and cerebral music inspired a whole generation of musicians to start making fusion.

Just hearing the word fusion conjures images of noodling instrumentals and self-indulgent solos.
Hahaha. It was a terrible name for a terrible genre where nothing really fused. To make matters worse, the records just got quieter and lamer until we were left with smooth jazz. Which, lets be honest, is neither smooth nor jazz. It’s just elevator muzak. My point is, after Albert, Coltrane and Sun Ra were gone there was nobody radical left on the frontlines.

Have you been working on any new DKT / MC5 material since you reformed?
We actually haven’t done any writing together yet. We’ve been talking about it, but we didn’t know if we could play together until we did that show in London. We were so humbled by the response that night and the world tour we did last summer, that we’ve been thinking we should try and do some new songs. Maybe this gig will be the incentive we need?

What’s been on your turntable recently?
A wonderful instrumental group called the Nils Klein Singers and lots of old records by Cole Porter and George Gershwin. I’ve been going back to the great American composers and studying how they wrote their songs. Most of my work today is music for film and television so I’m keen to understand more about symphonic arrangements. In fact, I think I’m going to take some classes so I know how to write for violins and french horns. Real life is in session and I want to participate in it!

Are you working on any film material at the moment?
I’ve got a couple of different projects on the back burner, but the main thing I’ve been doing is music for extreme sports programmes. Its great fun because they let me do exactly what I want. I hate corny,gladiatorial tracks with lots of trumpets, so I try to put lots of other elements in there and use the job skills I have in a way thats outside the world of rock. I’ m a middle age man now and although I’ll always play in bands, there’s many other things I would like to do.