She was the First Lady of UK Punk who later became the Godmother of Goth. 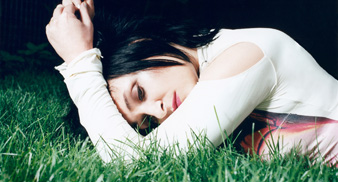 Having just released a new boxset of Banshees B-Sides, Downside Up, Uncut caught up with their legendary frontwoman after her ‘Siouxsie’s Dream Show’ performance at London’s Royal Festival Hall in October.

UNCUT: Let’s start by talking about what happened the other night at the Royal Festival Hall? You stormed off and called the venue organizers “silly fuckers”?
SIOUXSIE: Okay. Now way up front before we’d agreed to do the shows there, I said the one thing I want – I don’t care about champagne backstage or anything else – the one thing I need to specify is that I can’t have any Arctic drafts on stage. Because when I sing I open up and if I get Arctic drafts it kills my performance. And on stage that’s what was happening, despite them being told what I wanted.

So you walked off?
And called the Royal Festival Hall “a dump”. Ha!

I’ve never seen a man jump over his drumkit as fast as Budgie when he ran after you. Were you two having a domestic backstage?
Oh no, he’s right behind me. He was rooting for me. He said, “I’m glad you did that ‘cos I’m freezing my fucking balls off as well”.

There’s currently a big punk retrospective exhibition on in London at the moment. How do you feel about the nostalgia industry that’s grown around punk?
Punk nostalgia seems to be every year. “It’s 25 years!” “It’s 26 years!” I think people keep going back to it because it’s a thing that can’t be repeated. People try to reinvent the next big thing that’s going to shake everything up but it’s too self-conscious. What people don’t understand is when punk started it was so innocent and not aware of being looked at or being a phenomenon and that’s what everyone gets wrong. You can’t consciously create something that’s important, it’s a combination of chemistry, conditions, the environment, everything and it’s not something you can orchestrate. It’s a freak of nature and I love stuff like that.

You were at the forefront of the London punk scene. Are you still in touch with any of the others from that original crowd?
Yes, I saw Steve Jones recently. Actually, he said to me, “I really wish those early Pistols shows before it blew up in the media had been filmed.” He’s right, because not many people saw those early shows and they’re certainly what turned anyone who saw them around, not when the spotlight from Bill Grundy and all that happened. To see people actually trying to stay as far away from the front of the stage as possible. They were incredible.

Did you find punk sexually liberating?
I didn’t differentiate. It was the first thing that was unisex, and that kind of followed on from the androgyny of Bowie, but taking it further. There were tough girls and tough boys. It was trying to break down the stereotypes and it was the kind of thing where, for the first time, women were on a par and not seen as just objects. Though girls were objectified still.

I found an early quote from you circa 1977. “Erogenous zones are overrated”?
Did I say that? Nah, that’s probably Sid [Vicious]. It sounds like Sid. I wouldn’t say something like that. I’m fine with erogenous zones. I’ve never been anti-sex or anti-sexuality. I’m just anti-hypocrisy. I’ve always felt that what’s good for the goose is good for the gander.

How did you feel when later on you became a kind of alternative sex symbol?
Oh, I find all that hilarious. You can’t take anything like that seriously. I mean, sex is pretty hilarious anyway.

You’ve spoken before about how much you hated the Siouxsie lookalike phenomenon.
When people took it as being part of an army, or a uniform, yes. I was confused by it certainly. I didn’t really know how to handle it.

But you became a genuine social type. You are, literally, an icon…
Hmmm.

… in the same way that Morrissey or Robert Smith begat copycat clones…
Oh! But come on, there were more Siouxsies! [smiles] More of me than them. Anyway Morrissey and Robert… they’re just blobby compared to… [laughs] THE ICON! But yes, the amount of Siouxsie look-alikes was frightening.

You always resisted the ‘Goth’ tag?
Well, all those other bands, the doom, the black. That’s all they had. They took it seriously. There was always more to us than that. What I really resent most about people sticking labels on you is that it cuts off all the other elements of what you are because it can only deal with black and white; the cartoon. Because there’s no detail there, there’s no mood there. I know that the music and what we’ve done has got many levels of humour or seriousness or colour. So of course I found that ‘Goth’ tag very limiting and, rightly so, I didn’t go along with it. Why would I go along with having two arms and a leg cut off? Why would I allow myself to be like Boxing Helena?

Banshees guitarist John McGeoch died earlier this year. When did you last see him?
It was a long time ago. The sad thing with these Royal Festival Hall shows is that when we were first thinking of doing them at the end of last year, at the back of my mind I was thinking, “Maybe we should invite John?”, because we did “Obsession” [A Kiss In The Dreamhouse, 1982] and a few things from that period. And it was an idea. I was thinking, “God, I wonder how he is, I hope he’s okay, I hope he’s over the obvious problems he used to have with alcohol”. I hadn’t seen him in years, since bumping into him in the early ‘90s. But he was easily my favourite Banshees guitarist. An effortless talent. Very natural and very responsive.

So tell us about this new Siouxsie & The Banshees’ B-sides boxset, Downside Up…
It’s something I’ve wanted to do for a long, long time. For me, especially, I was always shouting to do B-sides. Steve Severin would be moaning, “I’ve forgotten how to play it” or go, “Oh, let’s just do the singles” but I was always, “Nah! I wanna do a B-side!” To me the B-sides are very spontaneous. The singles are very definite, we know what their purpose is for, but the B-sides I always think allow something spontaneous to happen to compliment the A-sides. To me it’s an element of the band which people who see it as black and white, as a cartoon of a goth band, just don’t get. They’re missing a great side to the Banshees. We can turn on a sixpence.

Finally, what can we expect from your new solo album planned for next year?
I think it’s gonna have an element of what the Royal Festival Hall shows had. It’s gonna be inspired by orchestra and brass. I started it ages ago and had to postpone it when I got ill, and I was really ill. I saw lots of specialists. At one point I was coughing up blood. I had this operation where they sent this fibre-optic circular saw inside me. I woke up with two bloody tampax up my nose. Two super-size tampax as well! When the nurse pulled it out she said, “This is gonna pull a bit”. I thought, “Oh my god, this is what it’s like to be embalmed and have your brains pulled out.” I was really scared of losing my voice. I’ve never had any vocal training before but I saw this great voice coach who told me I had absolutely nothing to worry about. She gave me some great exercises to do, warming up. So that’s why I was so pissed off getting this cold air at the Festival Hall. I was there in the moment and then all of a sudden it was like Arctic wind. Fuck off! It was definitely coitus interruptus.

Downside Up is out now on Polydor