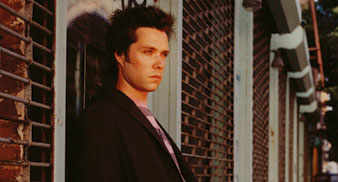 UNCUT: Is Want Two in any way the flipside to, or a contrast to, Want One? Or is it just a companion collection?

“I see it as kind of a yin to the other’s yang. It’s sort of the shadow or the dark side. It’s the feminine to Want One’s masculine. Both are them are still trying to be somewhat grandiose, but whereas the first record was centred around my own personal struggles, this one is much more of a view of the outside world and how dark it still is.”

Are you happy with the balance you’ve struck between rock and pre-rock arrangements on the Want albums? “Little Sister” could have been written by Mozart.

“My voice is somewhat ravenous and tends to require blood in order to survive, so I like singing stuff that’s challenging, but also that people want to hear.”

Did you know Jeff Buckley at all or is “Memphis Skyline” a kind of homoerotic fantasy?

“I met him once and we hung out and he died not long after. I hated him when he first came out. I thought he was riffy and kind of boring and I didn’t really get it. But there was also a deeper rivalry with Buckley that existed in my mind. I don’t know if we could outsing each other, but it would have been interesting to have had a singing competition with him.”

What did Van Dyke Parks, who had so much to do with your first album, do on Want Two?

“He did the arrangement for “Little Sister”. He told me when I started out, “Rufus, in Japan there’s a saying: ‘It’s the nail that sticks out that gets hammered down the hardest.’ “That’s always helped me.”

Is homosexuality becoming more or less of an issue for you as your career develops? Do you still want to be a “Gay Messiah”?

“Well, unfortunately I think that homosexuality has become a paramount issue in the future of the United States. I truly believe that for the voters who voted Bush back into power, the real enemy isn’t terrorists but gay people and women. Someone asked me the other day if I felt like a Jew before the Holocaust and I said ‘No, I feel like a homosexual before the Holocaust’.”

Do you feel any more or less encouraged by the state of the music industry than you did when you started out?

“I think it all kinda comes out in the wash. My parents’ generation had so much opportunity – every one of their friends was a songwriter with a record deal – but in a weird way that kind of distorted what they did because they could never get over the fact that the party was over. So I feel in a strange way that I’m lucky now because it is so hard to reach the top if you’re doing something on your own with your own theories and your own passion and not just sitting there at some computer. You’ve got a wall to bash up against, and I think I like that better.”