Uncut DVD catches up with the man ahead of his Uncut-sponsored movie season running at London's National Film Theatre. 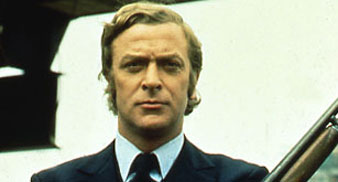 With both The Ipcess File released on DVD, and a forthcoming, UNCUT-sponsored season of his movies running at London’s National Film Theatre, MICHAEL CAINE talks exclusively to UNCUT DVD about one of his greatest roles — as spy Harry Palmer in The Ipcress File

UNCUT DVD: Harry Palmer was sort of the anti-James Bond…
CAINE: Well, we decided we wanted him to be the antithesis of Bond. Obviously there wasn’t
any competition with Bond because Harry wasn’t another great, suave spy. He was more like a real spy, an ordinary guy who you wouldn’t look at twice in the street. So we gave him some glasses. I wore glasses naturally so I knew how to use glasses, I took them off and put them on very easily. But what worked for me is the minute I took the glasses off, I wasn’t Harry Palmer. I saw Sean [Connery] having difficulty trying to get
away from James Bond and I thought, “Well the minute I take these off, I’m not Harry Palmer.” Which proved correct.

Is it true the studio were nervous about the character?
Well, when they saw the first rushes they said, “He’s wearing glasses! Is he short-sighted?” We said, “No, it’s part of the character.” They said, “There’s never been a leading man since Harold Lloyd who wore glasses, and he was a comedian!” And then they saw the rushes where I cooked the meal. They said, “Everybody’s gonna say he’s a fag! I mean, cooking? John Wayne wouldn’t cook anything for anybody! It looks like a faggot cooking!” I mean, these were the words they actually used.

Author Len Deighton was a cook though, wasn’t he?
That’s right. If you look in Harry Palmer’s kitchen, there’s a dresser with all menus pinned up on it. The recipes are all Len’s because he used to have a column in The Observer which was like a comic strip of recipes. He was a great cook, a smashing cook. I learned a lot about food from playing Harry Palmer.