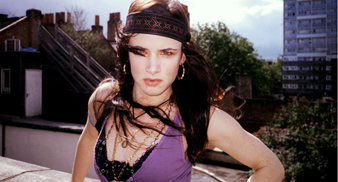 Already notorious for roles in movies like Cape Fear, Husbands And Wives, Natural Born Killers and From Dusk Till Dawn, Juliette Lewis now brings her rock band Juliette Lewis and the Licks to the UK. They’re embarking on a brief tour (beginning at the NME Astoria show tonight) to herald the E.P. “Like A Bolt Of Lightning”. Album “You’re Speaking My Language” follows around May. Uncut spoke to the rock chick as she scrubbed up for the Baftas in London.

So all you ever wanted to do was rock?

“Oh yeah, man. Ferociously. Our stuff isn’t overly dark or angry or anything, it’s there to energize you. It’s rhythm-driven. If I want it more emotional, I tell the guitarist to make it more dangerous, or make it explode, and he just runs with it. I was singing before I acted, but I was also attracted to drama, and, y’know, I got successful at that, which isn’t a bad thing. Nobody would know it to look at me, but the movies I liked as a kid were musicals – All That Jazz, Hair, Fame, Annie, all that stuff – that’s where my little youthful imagination was. Now I think: Jagger did performance, Iggy does movies. It’s a logistical challenge, as I’ve just finished two movies that’ll be out this year, and I’m absolutely still acting, but music is right now where my focus and attention are.”

Did performing those PJ Harvey songs in Kathryn Bigelow’s Strange Days impact upon you?

“Yeah, that was a thrill, but the director set a template and I stuck to it. These songs now are my stories, my language. Over time I’ve loved jazz, Miles Davis and Chet Baker, then Janis and Jimi and Creedence, then classic rock. I recommend everyone wakes up in the morning to Bachman Turner Overdrive’s “Taking Care Or Business” – you’ll feel better. Somewhere inside me my spirit is that of a big heavy trucker dude. But I’m also into The Cure, New Order, The Killers, TV On The Radio…”

“Well, journalists judge me harshly cos they think they know me from the movies. But I don’t mind – it just means we have to be that much better than any other new band! That’s the challenge. We’ve been together two years, we’ll keep working hard. Onstage I’m the opposite of shy. I’m the opposite of the girl who wants to look pretty and be liked. I’m somebody who’s spastic and puts myself out there. My heart’s in it, so it’s fun. Look, these shows will be interesting, exciting and awkward, all rolled into one – which I‘ll love.”

Aren’t you a bit too rock’n’roll for The Baftas?

“In those scenarios, I’m always a fish out of water. But I have a beautiful purple Julien MacDonald dress, and I’ll behave as I introduce whoever wins whatever. See, London may be boring for you guys, but for me it‘s a new non-American environment.”

In Chuck Palahniuk’s last book, you hit him with a bunch of berserk questions. The sanest was: ‘Do you like rollercoasters?’

“I think the answer to that says a lot about someone. And yes, I do, especially with the jetlag fever I have right now. The Licks will take you take high, take you low, through the roof and through the floor. Check us out. Then come say hi. It‘s not like I have bodyguards!”