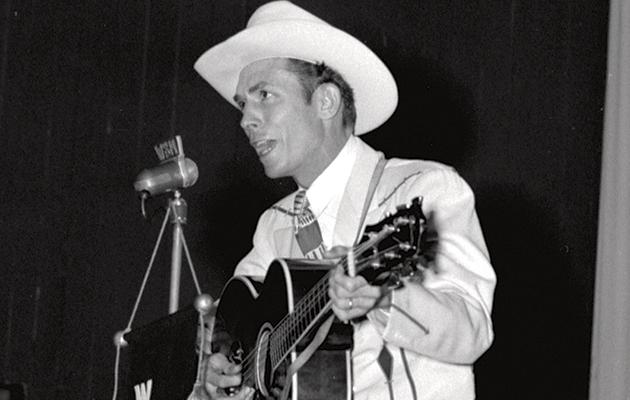 Hank Williams’ music is one of the great deltas of Americana, a place where country, gospel and blues first converged. But it’s also a vessel for something less tangible: something spare, spooked and timeless, universal and all too human. In the six decades since his death, the thread of his music and myth has wound through the work of Elvis Presley, Bob Dylan, Tom Petty, Steve Earle and hundreds more. Everything from his iconic white Nudie suit to his ingrained melancholy and wayward lifestyle made a deep impression on Gram Parsons. In his songs, Williams defined several of the most powerful archetypes of American music, among them the “mansion on the hill”, later appropriated by Bruce Springsteen on Nebraska, and the hooting “midnight train” that haunts “I’m So Lonesome I Could Cry”.

The Lost Notebooks, an album of 12 unreleased Williams lyrics set to music by, among others, Jack White, Norah Jones and Dylan, a long time Hank devotee, was released in 2011. “Bob and I have talked a lot about Hank,” says Tom Petty. “He’s a big fan. We’ve played Hank’s songs in rehearsals many times. That mix of mystery and simplicity is very Dylan but, really, you can’t be a songwriter and not appreciate Hank Williams. He’s the granddaddy of all that.”

“The thing about Hank’s songs is that they’re so poetic,” says Michael Timmins of Cowboy Junkies, whose crawling cover of “I’m So Lonesome I Could Cry” on 1988’s The Trinity Session added considerably to the lineage Williams created. “The lyrics had that poetry that we didn’t think was around before Bob Dylan. You can easily miss it if you don’t really listen, there’s nothing complicated about it, but the images are so striking. Also, he was exploring his inner demons in a way that we didn’t think really existed before The Beatles and Dylan.”

Indeed, Williams, who died aged 29, almost single-handedly created the template of the tortured singer and songwriter. “There was a point in my life when I probably believed that my behaviour and what I did to myself was OK because Hank had done it,” admits Steve Earle. “He’s an archetype, a seminal figure. Without him rock’n’roll could have ended up being about girls and cars forever, and it wouldn’t have lasted so long.”

A long, cool drink of water from Alabama, Hiram King Williams was born in Mount Olive on September 17, 1923. It was a childhood custom built for a sad country song. His father Lon was hospitalised with an aneurysm when Williams was six and he would barely see him for a decade; one early song was called “I Wish I Had A Dad”. His mother Lillie was overbearing, dictatorial and demanding, setting the template for most of the women with whom Williams ended up tangling. He also suffered from spina bifida occulta, a deformity in which the spinal column fails to fuse and which dogged him his entire life. After moving to the town of Georgiana, at 10 he came under the informal tutelage of local blues musician Rufus “Tee-Tot” Payne. Williams later claimed that “all the music training I ever had was from him,” and blues remained a bedrock.