A Ghost Story review and Will Oldham Q&A 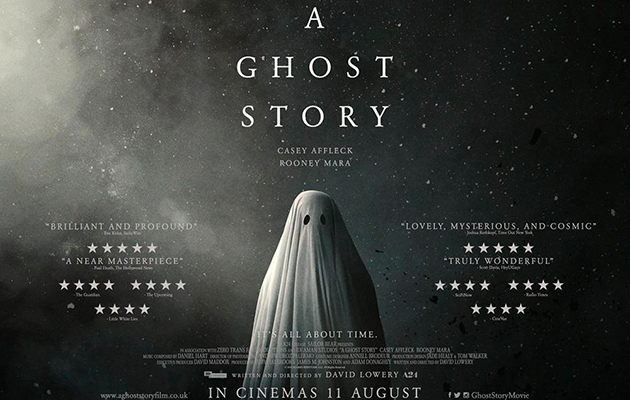 In 2013, director David Lowery made his debut feature, Ain’t Them Bodies Saints, a lyrical Texan melodrama set during the 1970s, with Casey Affleck and Rooney Mara as a young couple on the run. Following his remake of Pete’s Dragon, Lowery reteams with Affleck and Mara for A Ghost Story; another lyrical piece that discretely tackles questions of a cosmic, spiritual nature played out on an intimate level.

Affleck and Mara, a couple identified only as C and M, are in the process of moving in to a new house. One night, there are odd, unexplained noises; the next morning, C is killed in a car accident. In the morgue, his body is draped in a white sheet; in one of the film’s make-or-break moments, the sheet sits up, gets off the table and trudges home across a field at sunrise, sheet dragging in the mud. There, he silently watches over his bereaved partner (in the film’s second make-or-break moment, C sits on the kitchen floor grief-eating an entire pie in one static, five minute take). It is the kind of film where a character might look pensively out of a window, where the only sounds are the rain falling outside and the mournful wheeze of violins on the soundtrack. It is, essentially, an arthouse take on Ghost.

Affleck does an amazing job, managing to be hangdog while buried under a bedsheet for most of the film; how different would the film be if he just hung around moping, without the linen? Mara meanwhile gives a powerful performance, internalizing her grief, conveying deep loss while remaining outwardly inscrutable. As time loops back on itself, Lowery reaches for something profound and moving. “We build our legacy piece by piece,” explains a cameoing Will Oldham. “And maybe the whole world will remember you, or just a couple of people. But you do what you can to ensure you’re still around after you’re gone.”

Q&A
Will Oldham
You began your acting career before you started releasing records. Was acting, at one point, your first choice of a career?
If by ‘career’ you mean ‘life’ then yes. Most of my heroes, living and dead, were actors. Hi-diddle-de-dee and all of that. The way that experiencing the good work of others made me feel…that’s what I wanted to do. It felt like a solid path towards every possible life.

Who were your acting heroes?
You know, Holly Hunter, Timothy Carey….the usual. Peter Lorre knocked my socks off. Still does. Jon Voight. And folks in the theater in Louisville, or actors who passed through for work: Ken Jenkins, Patrick Tovatt, Bruce Kuhn, Mary McDonnell, Adale O’Brien. The folks who worked our local rep, Actors Theatre of Louisville, they were, in my eyes, the greatest. My bedroom walls were festooned with black-and-white postcards of Humphrey Bogart, Harpo Marx, Lydia Lunch. Then, later, Jonathan Richman, Leonard Cohen.

You were only 17 when you played Danny Radnor in Matewan. What are your memories of working with John Sayles?
Big memories, the biggest. The MATEWAN experience created a false impression that film sets are egalitarian creative work spaces and helped form a template for how I approach making records and assembling tours once I saw that film sets are rarely good places to get good work done among mutually respectful people.

If I hadn’t seen some of your other earlier films like Thousand Pieces Of Gold, Radiation or The Guatemalan Handshake, which one would you recommend I rent, and why?
Go for WHAT COMES AROUND and you will waste time and money watching something that was a waste of time and money. On A THOUSAND PIECES OF GOLD my new life began, it was a great set and I met a friend who did some significant shaping of the rest of my life. Many of the folks from the MATEWAN crew were there as well. I don’t know your taste in pictures… Have you seen JACKASS 3D?

You began your ongoing creative relationship with director Kelly Reichardt on Ode. She was evidently impressed with you; but what qualities do you most admire about her as a filmmaker?
Kelly said she liked my legs. I liked it when she took me to Dubai.

Did you see any parallels between the itinerant life of a musician and Kurt, the character you played in Reichardt’s film, Old Joy?
It’s taken years to recognize an obsession with closure. Kurt, and many touring musicians, are allergic to closure. Not only to closure, but to committing to anything resembling a continuous identity. Shallowness is a disease; Kurt has a terminal case of it. Accepting the reality of streaming music is like drinking from a river of toxic sludge.

I really liked your performances in Pioneer and The Lonely Life. How do you view short films, compared to features? Are short films like 7”s? No less carefully crafted than a full-length LP, but just a more intense experience?
I get to yield authority when it comes to acting work; it’s up to the producers and directors to care about the difference between short films and long ones.

What comparisons do you see between songwriting and acting?
In a film like NEW JERUSALEM, in which the actors are responsible for the creation of the dialogue, there’s a parallel. Usually, though, acting is interpreting, reacting. Songwriting is building from the ground up something to be interpreted.

For those who’ve yet to see the film, can you tell us a bit about the character you play in A Ghost Story and the ideas he’s putting forward in his speech?
I’m still learning. His ideas are not mine. Our ideas tangentially connect. The wardrobe was mine, though I never wear those clothes together. The best part of his diatribe is when his ideas intersect with the Ghost’s objectives. I am more resolved with perceiving our reality as a balance of one part permanent, a billion parts transitory.

Are there any other musicians you admire who also act on the side? What do you think of Dylan’s film work, for instance?
The best acting work in a film by a professional musician is probably Dwight Yoakam’s work in the CRANK movies or Abbey Lincoln’s work in NOTHING BUT A MAN. Musicians who are great in movies, regardless of their acting abilities, I’d say are Dexter Gordon in ROUNDMIDNIGHT, Kris Kristofferson in LIMBO, Kyle Field in HANG LOOSE, Tom Waits in RUMBLE FISH.
INTERVIEW: MICHAEL BONNER

A Ghost Story open in UK cinemas on August 11