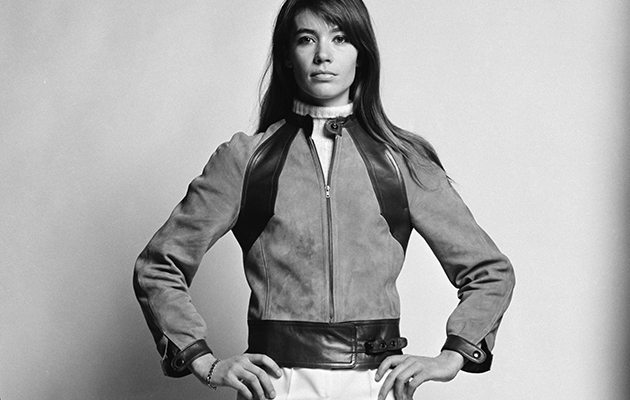 To Paris, then, for a rare meeting with FRANÇOISE HARDY. There is a splendid new album to discuss, of course – her first for six years. But the pioneering chanteuse also reflects on her remarkable career, recounts run-ins with The Beatles, Dylan and Nick Drake, and shares her own hard-won philosophies. “The truth?” she tells Tom Pinnock. “We will discover it after we die.”

Tucked away on the back cover of 1964’s Another Side Of Bob Dylan is a poem. “For Françoise Hardy,” writes Dylan. “At the Seine’s edge/A giant shadow/Of Notre Dame/Seeks t’ grab my foot…”

Hardy has known about Dylan’s untitled poem for the past 54 years, but it was only a few months ago that she really began to understand it.

“Earlier this year, two Americans got in touch with me,” she says. “They had inherited some drafts of the poem that Dylan had left in a café. They sent me these drafts, and I was very moved. This was a young man, a very romantic artist, who had a fixation on somebody only from a picture. You know how very young people are… I realised it had been very important for him.”

It is early spring when Uncut meets Hardy at the chic Hotel De Sers, not far from the Arc De Triomphe. She prefers not to venture out of central Paris if she can help it, so our rendezvous is near Hardy’s home, and just two miles from the ninth arrondissement where the singer grew up. Just turned 74, Hardy is still slim and bright-eyed, quick to laugh and as stylish as ever – today she’s wearing dark skinny jeans, a black top and a fitted blazer, with a bright-red scarf and gold necklace her only accessories.

Bob Dylan’s not the only artist to have been captivated by Hardy and her work, of course – The Beatles, The Rolling Stones, Nick Drake, David Bowie, Richard Thompson and Graham Coxon have all paid tribute to her considerable musical gifts.

“My sister had a Françoise Hardy single,” remembers Richard Thompson. “I think it was ‘Tous Les Garçons Et Les Filles’. My sister had other French records of the period – Richard Anthony, Hugues Aufray – so I was used to the intimacy of style. [But] this was sexier! If you put it together with the pictures of Françoise, it was a powerful package.”

Yet Hardy is not just a muse, but a compelling artist in her own right. She first came to prominence in 1962, aged just 18, with a mostly self-penned debut of infectious yé-yé – Europe’s pop take on rock’n’roll – and swiftly scored a massive hit with “Tous Les Garçons…”, which even cracked the UK Top 40.

“It was my first and most important hit,” Hardy says. “Unfortunately, as it’s not my best song!”

The tune was sprightly, but the lyrics were better suited to one of Émile Zola’s more miserable heroines than a young purveyor of Gallic pop: “I go alone through the streets,” Hardy sang. “The soul in pain… I go alone, because nobody loves me.”

“She was the opposite of all the French new artists trying to look and sound American,” explains renowned photographer Jean-Marie Périer, Hardy’s partner for much of the ’60s. “And her melodies were sad, she didn’t try to make them dance the twist.”

Hardy continued mining this seam of melancholy through a run of albums that quietly and tastefully explore styles from Brazilian jazz to English folk-rock. We’re in Paris to discuss these records, along with Hardy’s unexpected new album, Personne D’autre, in which she examines mortality and spirituality; in many ways, the record’s closest cousin may be Leonard Cohen’s final album, You Want It Darker.

“At my age the lyrics you are singing cannot be the same as the ones you were singing when you were 30 or 40 or even 50,” explains Hardy. “They have much to do with your past, but also with the idea of another life, in another universe.”