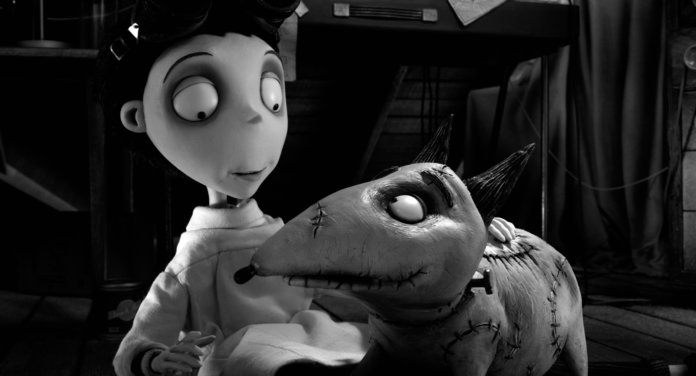 It’s true, there is very little that’s unfamiliar about Tim Burton’s Frankenweenie. The obsessive references to RKO horror movies, Ray Harryhausen and Edgar Allen Poe, designs that are pitched somewhere between Edward Gorey and Rod Sterling, the ongoing devotion to Vincent Price, an angry mob carrying flaming torches. Never let it be said that Tim Burton shies away from wearing his influences on his sleeve: Frankenweenie is a Frankenstein movie, sewn together from parts of other films, comic books, TV shows, and whatever vintage pop cultural detritus clutters up Burton’s mind. Weirdly, it’s also the filmmaker’s most straightforwardly enjoyable film in a long while.

In its earliest incarnation, Frankenweenie was a live action 30 minute short, made in 1984 while Burton was working at Disney, which the studio rejected as being too scary for children. Resurrected now as a full-length, stop-motion feature, this new Frankenweenie is an amiable piece of kiddie-Gothery, not remotely scary but certainly a vast improvement on Burton’s last film, the wretched Dark Shadows. We’re in a suburban America town called New Holland – a black and white Twilight Zone of small-minded prejudice, picket fences and robust housewives that feels stuck in the 1950s. Young Victor Frankenstein makes Super 8 monster movies starring his cheery pup, Sparky. When Sparky is run over and killed, the enterprising Victor – inspired by the school science teacher and Vincent Price lookalike, Mr Rzykruski (Martin Landau) – retrieves the corpse from the pet cemetery and wires him into a Heath Robinson-style contraption and a handy thunderstorm revives him. See! He rises! Soon, the local school kids are all bringing their own deceased animals back to life, and before long, the horrified townsfolk are being terrorised by a roving band of zombie pets: a tortoise, Sea Monkeys, a hamster and a weird cat/bat hybrid. Clearly, no good will come of this.

While enjoying his most commercially successful period, Tim Burton’s trajectory in the last ten years has also resembled a career in creative decline. His projects have been so-so remakes and adaptations that have gradually chipped away at the goodwill he’d earned up to the end of the Nineties. I’m aware that Alice In Wonderland was a massive box office hit for Burton – but I suspect that had more to do with the pull of Carroll’s book than Burton himself. The last Burton film I remember enjoying was 2005’s Corpse Bride –also a stop-motion animation, and another film in which a dead dog features prominently. It had a lightness of touch and, perhaps because of its brisk 77-minute running time, its felt focussed: particularly when compared to the cumbersome, rudderless Dark Shadows. I quite liked the swagger of Sweeney Todd, but it lacked any sense of danger.

Frankenweenie is also Burton’s first film without Johnny Depp in almost a decade. Coincidentally, it’s also the first since Edward Scissorhands in 1990 to feature Winona Ryder (voicing Victor’s neighbour, called – what else? – Elsa Van Helsing). Hooking up with Ryder after a gap of 20 years and returning to a decades-old project might suggest Burton is tacitly acknowledging that he was at his most creative in his youth. Indeed, how much does Burton see of himself in Victor, the unconventional boy trapped in a conventional town, who dreams of being a filmmaker?

Frankenweenie‘s narrative has an undeniably strong pull – the desire to bring back something that is gone forever. Yes, the film is sentimental; but it never quite slips into Spielbergian hokum. One of the film’s best scenes – where Victor, believing his attempts to resurrect Sparky have failed, embraces the dog, only for Sparky’s tail to slowly twitch back to life – is nicely understated. But the overwhelming vibe here of innocent fun; childlike, but not childish. Perhaps by going back to the very start of his career, Burton can now move forward.

Frankenweenie opens in the UK on October 17