Coogan and Brydon return for more Michael Caine impressions: this time, in the sun... 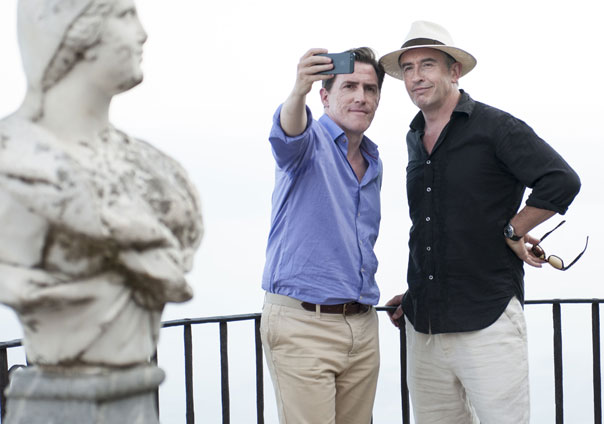 Coogan and Brydon return for more Michael Caine impressions: this time, in the sun…

‘It’s like second album syndrome, isn’t it?” asks Steve Coogan’s character, Steve Coogan rhetorically. He and his companion, Rob Brydon (played by Rob Brydon), are sitting in the spacious dining room at the Trattoria della Posta in Piemote, waiting for their first course to arrive. “Everyone has this amazing, expressive first album where they put everything into it, and the second album is a bit of a damp squib,” Coogan continues. “It’s like trying to do a sequel, isn’t it? It’s never going to be as good as the first time.”

The “first time” Coogan refers to here was The Trip, Michael Winterbottom’s six-part comedy series from 2010, which found Coogan and Brydon on a gastronomic tour of the Lakes and Dales on assignment from The Observer. This time – call it a second helping – they are commissioned to do the same thing, six meals in six different locations, but in “La bella Italia,” as Brydon waxes lyrically, “beautiful countryside, beautiful wine, beautiful women, beautiful food.”

In that witty metatextual way of the series, Coogan, however, is worried about the possibility that this second run might disappoint. And in this regard, Winterbottom follows the pattern traditionally followed by all makers of sequels: he repeats the best aspects of the original but on a much larger scale. If The Trip was about Coogan and Brydon trying to outdo each other impersonating Michael Caine in the best fine dining establishments the English countryside had to offer, then The Trip To Italy finds the two men once again trying to outdo each other impersonating Michael Caine – but in more glamorous settings like the Amalfi coast.

There have been changes, however. Whereas the first series delved into the relationship between Coogan and Brydon, their differences and diverging careers, The Trip To Italy finds their fortunes reversed. In this second series, Coogan is the abstemious, calmer of the pair while it’s Brydon whose personal life is in a perilous state of flux and who embarks on amorous pursuit of an expat yacht attendant in episode 2.

Impersonations, inevitably, are a major selling point here. There are many familiar voices essayed over the calamari – DeNiro, Pacino, Caine – as well as some welcome new additions. The first episode features a brilliant exchange over lunch as they imagine an assistant director on The Dark Knight Rises asking Christian Bale and Tom Hardy to enunciate more clearly. The scenery, of course, is glorious, Winterbottom’s camera grazing leisurely on shots of the Tuscan countyside in June. Coogan and Brydon drift languidly through this beautiful landscape, Englishmen on their Grand Tour, sporting Panama hats and linen trousers. If it looks glorious, there is all the same a strain of melancholy shot through this. Certainly, the original The Trip deliberated on fame, success and the perils of middle age, but similar themes outlined seem unaccountably amplified here in the Italian summer heat.

Yes, this is ostensibly the same as the thing before, but with extra linguine. It’s no bad thing, though.

The Trip To Italy begins on BBC Two on April 4