In the opening voiceover for their debut, Blood Simple, the Coen brothers established the methodology that has driven their films ever since: “I don’t care if you’re the pope of Rome, president of the United States, man of the year, something can always go wrong.” 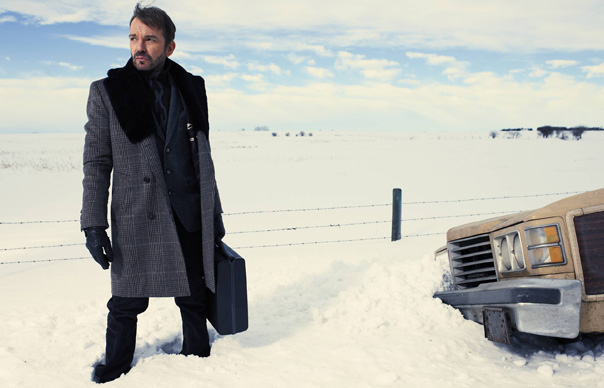 In the opening voiceover for their debut, Blood Simple, the Coen brothers established the methodology that has driven their films ever since: “I don’t care if you’re the pope of Rome, president of the United States, man of the year, something can always go wrong.”

Across 16 movies, they have exercised this philosophy without impunity on a range of characters including a playwright, a car salesman, a professor of physics and most recently a folk singer. This same spirit of cruelty pervades Fargo, the small screen spin-off from their 1996 film, that similarly finds an insurance salesman experiencing first hand the ways in which “something can always go wrong” in the Coens universe.

As we have seen in the last 10 years, television has largely overtaken cinema as the destination for must-see drama and comedy: The Sopranos, The Wire, Mad Men or Game Of Thrones. While many directors, actors and behind the scenes personnel have made their way from the movies to television, the same isn’t necessarily true of the material they produce (although the culinary activities of Dr Lecter have made a successful transition to the television via Hannibal, which is entering its second series, while a small screen spin-off from the Marvel Universe, Agents Of S.H.I.E.L.D, has also been rolled out). While this series of Fargo, on Fox in the States and Channel 4 here in the UK, has the small screen very much in mind, it thankfully doesn’t stray too far from the Coens’ original vision. As with their 1996 film, the series follows the attempts of a man to extricate himself from a calamitous situation involving some bad dudes from out of town. In both, the action unfolds against the bleak, snowy landscape of Minnesota. But there are subtle differences. Whereas the film found William H Macy as incompetent car salesman Jerry Lundegaard, who hired a pair of criminals to kidnap his wife for a share of the ransom, here Martin Freeman plays incompetent insurance salesman Lester Nygaard, who finds himself involved with a stranger, Lorne Malvo (Billy Bob Thornton): as with Jerry, Lester has no idea who or what he is dealing with. The setting in the TV series is Bemidji, Minnesota; as with the film, Fargo itself is some distance away, where bad things seem to happen. In the Coens film, it’s where Jerry meets his prospective kidnappers, while here, it is the home of a crime syndicate, with whom Lorne Malvo may likely be involved. The series includes a heavily pregnant woman but, unlike the Coens film, she’s not the chief of police but his wife. There is a sheriff’s deputy, Molly Solverson (Allison Tolman), who superficially at least resembles Frances McDormand’s police officer Marge Gunderson.

This isn’t the first attempt to adapt the Coens film for television. In 1997, Kathy Bates directed a pilot, with Edie Falco cast as Gunderson; it eventually aired as a TV movie in 2003. For this version, showrunner Noah Hawley has wisely decided not to incorporate any characters directly from the film, although the Minnesota manners and a Coens-esque ear for peculiar vernacular remain intact. If Northern Exposure (a useful reference point) was about eccentric characters living in the wilds of Alaska, then Fargo finds gentle humour among the ordinary comings and going of small town life in the Midwest. When Larry and his wife arrive for dinner at his brother’s house, as his sister-in-law opens the front door his she delivers the deathless line: “Come on in, Chris is working the ham.” One character, delightfully, is described as being “dumber than a dog’s foot.”

For those of us who have recently bade farewell to True Detective’s stellar double act Matthew McConaughey and Woody Harrelson, it seems possible that Freeman and Thornton will more than adequately fill their places. Freeman’s Larry channels a little of Tim’s mildness from The Office: he refuses to react when is insulted by his brother (“Sometimes I tell people you’re dead”) or by his wife and is still picked on by the old high school bully. Thornton’s Malvo, meanwhile, continues a Coens tradition of villains with bad hair: here, the wig and dyed beard make him look like a demonic Paul Rodgers. As he gradually insinuates his way into Bemidji, the story begins to resemble some kind of medieval tale, where the Devil comes to wreak havoc on the unsuspecting population of a remote village. Freeman and Thornton aside, as the show’s 10 week run progresses, I suspect we’ll see more of Tolman’s Molly and another policeman Colin Hanks’ Gus, who has his own chilling encounter with Malvo, and hopefully Molly’s father, seen at the end of the first episode, played by Keith Carradine.

So far, though, I’m unhappy to report, there’s no sign of the woodchipper.