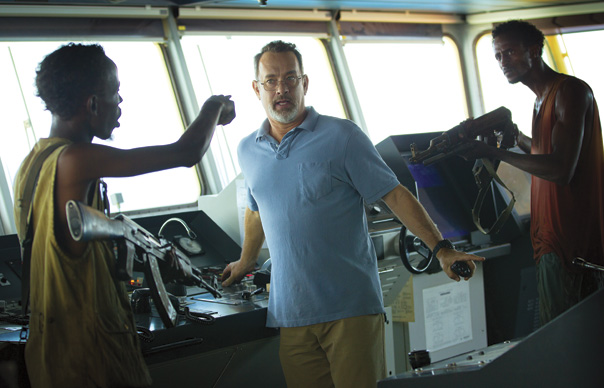 What happened to the little guy in the movies? In a crowded superhero marketplace, the humble blue-collar worker is – alas – a neglected figure in today’s movie landscape. We’re a long way away from Paul Shrader’s Blue Collar – or even Ridley Scott’s Alien: the ultimate regular joes in space in movie. Imagine Tom Cruise working construction. Or Bradley Cooper earning minimum wage in manufacturing. Christian Bale: a plumber? Movies are so disconnected from the reality of working class American life, you could be forgiven for wondering which major Hollywood star could open a movie populated by guys’ guys – all of them paunchy, the wrong side of 40 and distinctly unglamorous.

Fortunately – you might say – cuddly 57 year-old Tom Hanks ticks those particular boxes. Never one to show off, Hanks immerses himself behind specs and stubble as Rich Phillips, the captain of cargo ship the Maersk Alabama that was seized by Somali pirates off the Horn of Africa in 2009. This real life story is filmed by Paul Greengrass much as you’d expect, with shaky hand-held cameras shoved so closely into people’s faces that you can see sweat literally ooze from their pores. And this is a very sweaty film.

A companion piece of sorts to United 93 – another Greengrass film about normal people trapped in confined space under extraordinary circumstances – Captain Phillips also invites comparisons with Tobias Lindholm’s excellent film, A Hijacking, from earlier this year. But while Lindholm’s film followed the hijacking of a Danish cargo ship from multiple perspectives – both on the boat and back in Denmark – Greengrass maintains tight focus on the Maersk Alabama and, later, a covered lifeboat. By the time he brings in the Navy SEALS and it gets a bit Zero Dark Thirty, you might be thankful for a bit of light relief.

What lingers most about Phillips’ story is the lack of robust security on broad the Maersk Alabama; the crew appear to have no significant protection against pirates beyond some slightly ineffectual water canons, after that the only option available is to lock themselves in the engine room and hope for the best. The Maersk Alamaba was the sixth vessel in a week to be attacked off the Somali coast – very much a “real world scenario”, as Phillips calls it. Incidentally, Captain Phillips is one of two Tom Hanks films bookending this year’s BFI London Film Festival – in the other, Saving Mr. Banks, he plays Walt Disney, the man responsible for the ultimate blue-collar line-up in the movies: the Seven Dwarfs.