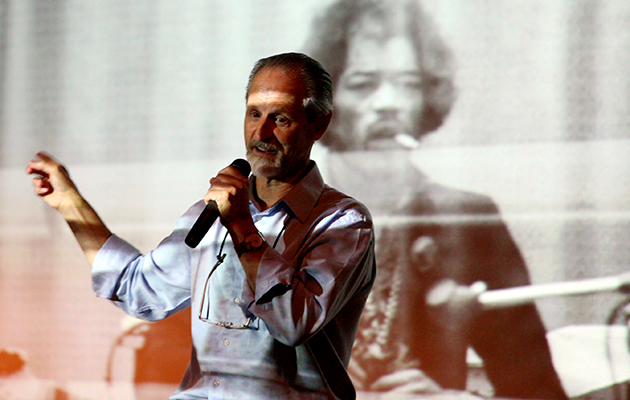 “If you want to analyse great bands,” says Kramer, recalling his work with the likes of The Rolling Stones, Led Zeppelin and Traffic, “you always come to the conclusion that they have these wonderful elements that are often polar opposites. And yet somehow it works.”

As an engineer and producer, he has spent 55 years marshalling these elements into some of the finest LPs in rock history, from Young Americans and Beggars Banquet to the Woodstock soundtrack, and even Derek & Clive’s ’76 debut. “I was underneath the board,” recalls Kramer of the latter, “crying with laughter, ’cos it was just so bloody funny!” His work with Jimi Hendrix on all three of his original studio albums remains his crowning glory, though. “I always had the tape running,” he explains. “Because something would happen in a second and you’d go, ‘Shit! I should have had that!’”

Jimi Hendrix Experience
Are You Experienced
Track, 1967
Kramer heads to Olympic Studios with the Experience and Chas Chandler to speedily record the guitarist’s debut

I first met Jimi around January 1967 at Olympic in London. There were a couple of tracks he had done at De Lane Lea, but they weren’t completed so we finished what he’d done before and then cut the rest of the LP. Why Olympic? My impression was that Jimi was thrilled with the sounds I was getting there, thank God! Working with an artist of that stature, you’re always trying to be one step ahead and trying to interpret what they’re hearing in their heads. That has always been my challenge and job in life. I think having achieved that level of confidence and success with him, in the sense that he understood me and I understood him, and he loved what I did, we hit it off immediately. Chas was very happy there, too. He said an amazing thing to us in his lovely Newcastle accent: “The rules are, there are no rules.” It opened up the floodgates for us in terms of experimentation. We all felt this was a wonderful thing we’d all fallen into, this amazing music that Jimi had created. It was always a challenge and always funny. When I look back on those days, I think, ‘Oh God, I was so lucky, I was in the right place at the right time.’ Some of the techniques I used were from working with a fantastic engineer at Pye in ’63, Bob Auger. We went out to record symphony orchestras with three mics, and some of that stuck in my brain and evolved into the distance-mic’ing technique in the rock’n’roll world. It worked very well.

I’ve always thought of Hendrix’s first album as being fairly primitive – it’s definitely got a lot of hair on it. Certainly by the second album we wanted to expand our technological expertise. “Well, what do we do now with Jimi? Let’s go more stereo…” “Yeah man, let’s do that!” So obviously the drums were done in stereo and I would start expanding more on the type of stereo right from the beginning, and plan it more with the sounds that Jimi was creating. Then I heard things in my head and I was thinking, “Jeez, maybe I could do this…” I didn’t revolutionise engineering. I was part of the whole English recording movement that had to adapt, because we didn’t have eight-track like the Americans did and we were very jealous of what they were doing. The Beatles, fortunately, had some very brilliant engineers who managed to synch up two four-track machines, but we didn’t quite have that, so we improvised. The way we did it was the bounce: we would take a stereo mix of the four tracks that we had recorded and record them on another machine in stereo and then fill up those two tracks. Then you have another four-track master and take that and mix that in stereo back to the first machine. The bottom line here is that you had to be really right on with your mixing, because if you made one mistake you would have to go all the way back to the beginning, which was a pain in the arse.