Upfront of his Miles Davis biopic, Don Cheadle gets up with Uncut – and Kenny G! 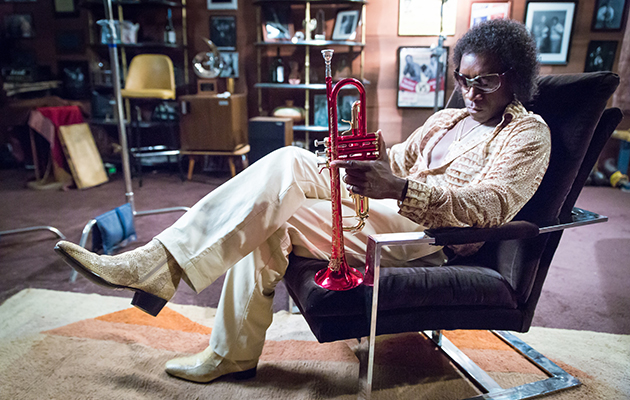 Don Cheadle was 10 when he was first introduced to Miles Davis’ music. “My parents had copies of Kind Of Blue and Porgy And Bess,” he tells Uncut. “I used to listen to those LPs all the time; especially Porgy And Bess. Because it’s based on Gershwin, it’s very theatrical and expressive. It felt like it was telling a story. Starting out as an actor at that age, those two things dovetailed together. It was going somewhere.”

It took 40 years for Cheadle to catch up again to Davis. The result is Miles Ahead – a film in which Cheadle not only stars as Davis but also directs. As with its subject, Miles Ahead has its own mercurial style. Set largely in the late ’70s, when Davis withdrew both from the concert stage and from the recording studio, it cuts away to show Davis’ earlier career in the late 1950s and his courtship of dancer Frances Taylor (Emayatzy Corinealdi), his first wife. There is also a fabricated subplot involving the hunt for stolen studio tapes that is closer to caper movie than conventional biopic.

“We didn’t want it to be a stuffy, cradle-to-the-grave film; the Greatest Hits of Miles Davis’ life,” explains Cheadle. “The ’70s became the departure point for us. How did this incredibly prolific artist, who had changed music three or four times, go silent for five years? What’s happening? How do you get out of that? You start the movie when he’s not playing and it makes you lean in and say, ‘What? We’re going to listen to you not play?’

“The period between when he met Frances and when she was running out of the door for her life was the period when he took Kind Of Blue and went from that first supergroup with Coltrane, Cannonball and Wynton Kelly to the second supergroup. He went everywhere those songs could possible take him, then never playing any of them again.”

Click here to read Miles’ collaborators on the making of Kind Of Blue, Bitches Brew and more

One useful comparison to Miles Ahead may well be Love & Mercy, the Brian Wilson drama that similarly focused on two specific periods in its subject’s life. Both films depicted the hard construction work that goes into creating art: in Miles Ahead, Cheadle takes us inside the Porgy And Bess sessions. “One of the questions we had as we were putting the film together was, ‘How do you show genius, quote unquote?’” admits Cheadle, who learned to play trumpet for the film. “We went in there and acted like musicians, played it, figured it out and just recorded the session.”

How would Cheadle describe the film’s two Davises – the 1950s and 1970s versions? “It’s not just binary,” he counters. “It was modal. It was like, this is now and that was then. You see similar things in both times. The fragile nature of what he’s dealing with: his jealousy, his fear of losing, the rage that inspires.”

Did you ever meet Davis?
“No, I saw him perform at Red Rocks, in Denver, Colorado, when I was a senior in high school, in 1982,” reveals Cheadle. “But I met Kenny G that night. Though that’s not exactly the same thing as meeting Miles Davis, right?”

Miles Ahead is released in the UK on April 22