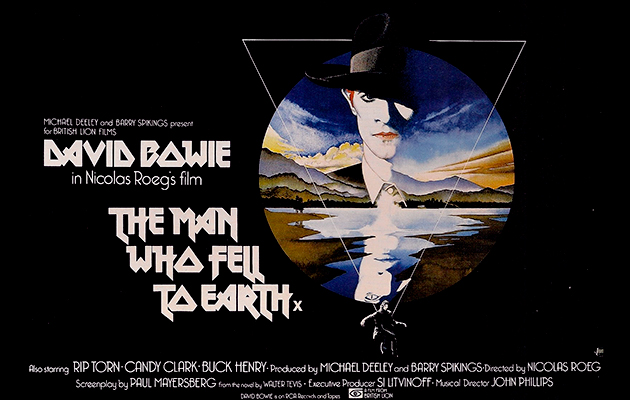 Compared to its heady mix of metaphor and allusion (to Icarus, Howard Hughes, Christ as Saviour, even Bowie’s own life), the plot of The Man Who Fell To Earth is simple. Thomas Newton lands on earth to save his drought-stricken home planet. To finance the return trip to his wife and children, he leaves the sagebrush desert for New York, where, employing top lawyer Oliver Farnsworth (Buck Henry), he reveals nine basic patents that will net him $300 million in three years. With Farnsworth’s guidance, he forms World Enterprises, a huge corporation and secret cover for his intergalactic mission. Money pours into Newton’s empire due to a string of mind-blowing inventions based on alien technology.

In the meantime, Newton remains hidden from public life, returning to New Mexico to disappear into the anonymity of a sleepy smalltown hotel. There, he becomes involved with room-maid Mary-Lou (Candy Clark). Suddenly, Newton’s quest almost becomes secondary to his plight as Roeg explores what it is to be human through time-shifts, man’s relationship with his environment (particularly the barren wilderness of the American West) and willingness to be corrupted.

Visually, it’s a ravishing film: from sweeping vistas to flashbacks of formless pale dunes on Newton’s native planet to Bowie’s flame hair against a cobalt sky. Innocuous as it may at first seem, the scene that cuts to the core of Roeg’s film is quite fleeting, set inside a local Presbyterian church. With Mary-Lou gazing up adoringly at Newton’s side, the congregation launch into “Jerusalem” – her special request for her new guest. Newton struggles through, but doesn’t know the words. The worshippers trill it effortlessly. And there it is: an alien pretending to be English, confronted with Blake’s quintessential hymn to Albion, out in a foreign desert chapel in the back of beyond. Newton fears that, by not knowing the hymn, his cover could be blown. It perfectly captures the film’s sense of displacement. 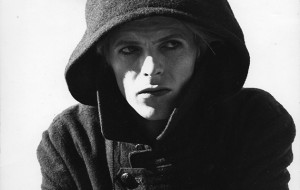 “In America, they didn’t get that at all,” laughs Roeg. “They just thought it was fair enough: Newton wouldn’t know the hymn because he was an alien. I never bothered trying to explain that to them.”

The idea of being English in the States was central to Bowie’s portrayal of Newton. “In terms of speech,” says Roeg, “the one thing people can tell immediately in America is whether you’re English. Then they accept whatever you do because it means you’re weird. So it was perfect for Mr Newton to pretend he’s English. It made the actual heart of the plight of this poor ‘man’ much more truthful because it wasn’t untruthful in terms of who Bowie was.”

As the nowhere girl whose life is ripped apart by Newton, Candy Clark’s character seemed equally at odds with her surroundings. “I think The Man Who Fell To Earth is No 1 in the list of films that I’ve done,” declares Clark from her home in California. “There was a lot to do with Mary-Lou. She was a complicated character, very quirky. I’d had the script for about six or seven months prior to shooting, so I got the chance to think about it, plan it. I wanted to make her as false as Thomas Jerome Newton, with the false fingernails, eyelashes and wig.”

And what about her relationship with Bowie off-screen?

“We didn’t hang out much socially, but I really enjoyed him. David Bowie was so perfect for the role that it was very easy to imagine he was from another planet. He was really at the height of his beauty. He had really thick hair that he dyed that lovely colour and his skin was just gorgeous.”

As the story progresses, Newton gradually succumbs to human vices. Obsessed with television, he fills an entire wall of his lakeside hideaway with TVs, simultaneously babbling with bursts of Elvis, Love In The Afternoon, images of war, teen flicks, Billy Budd and mating lions. He develops a fondness for Martini. His affair with Mary-Lou doesn’t satisfy him, distracted as he is by thoughts of his dying family back home. She, like everyone else, has no idea of his true identity. Finally, exasperated by his elusiveness, she freaks out. In the notorious scene that follows, Newton takes to the bathroom and slowly removes his human façade. Emerging in his natural, cat-eyed form, a terrified Mary-Lou pisses herself. It was a scene that drew the wrath of the US censor.

“It’s that thing about always wanting to know more about your partner,” says Roeg. “Candy’s a highly intelligent woman and a terrific actress. As a motive for that scene, all that was already a part of Candy’s natural being. Just in her human structure, she’d understand that pleading. But it shows you don’t want to delve too deeply into someone. When he exposes himself, it’s a complete shock. Because people daren’t expose themselves completely.”

Remembers Clark: “The day we did that scene, Bowie wasn’t even there. He’d drunk some milk and got sick. So when that door opens, it’s just me and the camera. They intercut him later, because he was sick as a dog. The image I used in my head was a frog. When you touch a frog, it pees all over you because it’s scared. The other image I used was from those nightmares you have as a kid, where you’re running from something and can barely move; like you’re in a block of ice. I was also in an improvisation class at the time and remembered something another actor did, which was throw himself backwards so his feet were on the wall momentarily. I used that idea, as if I’d just seen something with so much impact it physically threw me back. I got a lot of bruises for it.”

For Roeg, Newton’s ‘unveiling’ was pivotal: “The lover’s oldest question is, ‘What are you thinking, darling?’ There’s a terrible tragedy to that in terms of human relationships and exposing yourself for what you are. Rather than, ‘Who are you?’ it’s more a question of who someone isn’t. And Bowie was quite marvellous at that. I didn’t want him acting that way. That was important.” Indeed, Bowie admitted as much in 1993: “Just being me as I was was perfectly adequate for the role. I wasn’t of this earth at that particular time.”

Faced with her genital-free lover, a repulsed Mary-Lou flees. But Roeg is audacious enough to portray the gloopy alien sex in Newton’s head. It was, as film critic Alexander Walker famously put it, “like watching a stick insect at work”. WitNewton back in earthly guise, the sex scenes between Bowie and Clark also suffered at the hands of the American censor.

As in so much of Roeg’s output, the vitality of the sexual act is crucial, from Jagger and Pallenberg in Performance to Art Garfunkel and future Roeg spouse Theresa Russell in Bad Timing via Sutherland and Christie in Don’t Look Now. In the case of The Man Who Fell To Earth, the demented Newton’s enjoyment of Mary-Lou begins sadistically (with him brandishing a pistol) before he reveals it only fires blanks (an allusion to his impotence vis à vis his task on earth).

With Roeg and Clark an item during the shoot, was there any trepidation over that scene? “Oh no,” laughs Clark, “I think Nic kinda liked it! He got a kick out of it. You English people can be very kinky.”