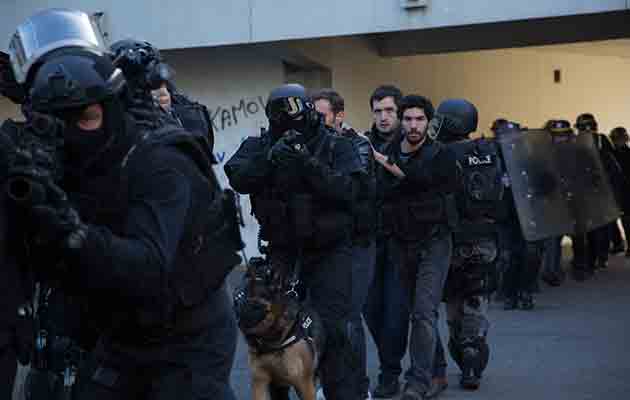 In a Harry Enfield sketch from 2012, two couples discuss their respective viewing habits. One couple – led by a suitably condescending Enfield – only watch shows as box sets: Borgen, Breaking Bad, Game Of Thrones. “We’ve got a friend who still says ‘series’ instead of ‘season’,” grimaces Enfield. “He is such a wanker compared to us.”

While the sketch is only three years old, it’s instructive to see how habits have changed since. At the time, broadsheets were full of op ed pieces either defending or expressing concern about the box set culture. The Guardian asked, Are there more box sets available than a single person could watch in a lifetime? Now the conversation no longer seems to be about the box set, or even what season, but the platform: Netflix, iPlayer, YouTube, Amazon Prime.

Despite the methods of distribution, reassuringly, the narrative drama series still holds sway. Sky’s latest, The Last Panthers, arrives with a Europe-wide simulcast and a new song from David Bowie. However, despite such whoompff!!, the show cleaves closely to the familiar tropes of crime drama.

The first episode opens with a heist, in which a gang of Eastern European jewellery thieves lift €15m worth of unset diamonds from a bank in Marseilles. “It was a good hit,” observes one character ruefully. “They were fast, well-prepared and extremely efficient.” The death of a six-year old girl during the getaway brings with it plenty of heat: for the police investigating the crime and also for the crooks, who suddenly find their haul significantly devalued. The action moves from France to Belgrade, Serbia and deeper into Eastern Europe.

At this point, you could perhaps be watching any of the slew of Euro crime dramas that dominate BBC Four’s Saturday night schedule. The Last Panthers is essentially Balkan Noir. The director is Johan Renck, a former music video director behind promos for Madonna, New Order and Suede whose credits include episodes of Breaking Bad and Vikings. For The Last Panthers, Renck favours a colour palette not too far from David Fincher’s: dark tones, mostly green and blue. The score, by Warp artist Clark, has a sullen, electronic undertow.

The script is from Jack Thorne, a former protégé of Paul Abbott, whose previous work on shows like Shameless, Skins and the This Is England series suggested he’d press further into challenging, socially-engaged drama. But The Last Panthers is a remarkably ambitious career swerve. The show not only covers a lot of ground, geographically-speaking, but also a lot of story strands.

There is Samantha Morton as Naomi, the insurance investigator instructed with retrieving the stolen gems. “I don’t do the Balkan work,” she tells her boss, Tom (John Hurt). In flashback, we see Naomi in her previous career as a UN soldier in the Balkans: a significant incident seems to have ended especially badly. Then there is French-Algerian police officer, Khalil (Tahar Rahim), who is concerned principally with bringing them men to justice for the murder of the young girl. And finally – perhaps most interesting of the principal cast – is Milan (Goran Bogdan), a former member of the Panthers, a notorious gang of jewel thieves, who is estranged from his former colleagues and family. There is much middle-distance brooding from Milan, as he reconciles himself to revisit his dysfunctional family, before a high level of killing begins.

While he first episode sets up a number of interesting, overlapping plot threads; but perhaps what appeals most is Eastern Europe itself, a relatively unexplored location for television drama. In a press statement, Renck outlined a meeting he had with David Bowie, where “We discussed the various aspects of the show; naturally, the plot line, but also the underlying currents of guilt and personality flaws. We talked about the dark heart of Europe. We talked about the Biblical aspects of human nature.” It is the “dark heart of Europe” that seems particularly pertinent here. The heist provides an opportunity for Thorne and Renck to tackle hefty themes of race, poverty and national identity as they occur in a volatile environment.

In one sequence, Milan and his accomplices traipse through a rubbish-strewn gypsy camp in the company of a low-level mobster. “You know, I’ve been playing a game with my brother,” says the mobster genially. “As children we used to hit each other in the balls for money. Then we developed it to 20 Euros for drinking a little whiskey. Then 50 Euros for tearing a nail off his pinky.