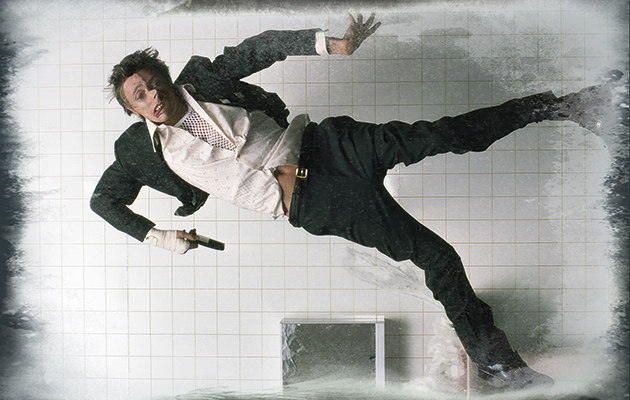 It’s a good week for David Bowie fans. The latest box set – A New Career In A New Town (1977–1982) – is in the shops, covering the back end of the Seventies, from Low to Scary Monsters (and Baal!). Meanwhile, in case you missed it, Uncut’s handsome new sister title, A Life In Pictures, dedicates its first issue to Bowie: you can read more about what it contains by clicking here and buy it here.

So I thought I’d add to the general Bowie ambience by posting my interview with Tony Visconti, which originally appeared in Uncut issue 245…

In spring 1979, David Bowie arrived in New York with unfinished business to attend to. Work had begun on his latest album the previous September at Mountain Studios, Montreaux; now Bowie and producer Tony Visconti entered the Record Plant Studios to complete Lodger. Alas, events did not go quite according to plan.

“We had a horrible studio to mix in,” remembers Visconti. “After Ziggy Stardust, David’s big hits were mainly in the rest of the world; they weren’t big sellers in America.  By the time we got to Lodger, he’d dropped in status. So we were assigned Studio D. It was really bad. But we had a deadline to finish the mix.

“Over the years, David and I bemoaned how we wanted to remix it,” he continues. “But we never got around to doing it  until there was a break  in recording Blackstar.  I thought, ‘If I don’t do something about Lodger, it’ll never get off the ground.’ I started remixing it on my own time, without David’s knowledge. When I had five mixes done, I played it to him. He absolutely loved it and gave it the green light.”

Visconti’s 2017 mix of Lodger is included in David Bowie: A New Career In A New Town (1977–1982), the third in a series of boxsets spanning Bowie’s career. This new set spans Low to Scary Monsters (And Super Creeps) and gives particular focus to Bowie’s so-called ‘Berlin trilogy’, covering Low, Heroes and Lodger. “Lodger wasn’t really part of the Berlin trilogy,” says Visconti. “People gave it that name. It was done in the spirit of the Berlin trilogy and of course it was the last album featuring Brian Eno as a composer and musician, so it kind of belongs in the Berlin trilogy. But it was recorded entirely in Switzerland and mixed in New York!”

Aside from this new mix, the producer promises a surprise or two from the vaults. “I found some little gems on the tapes,” he reveals. “At the end of ‘Yassassin’, David does  a little Arabic rap that didn’t make the record.  I put it on the mix this time and it sounds wonderful. David was proud of these re-releases, but he didn’t want to get involved. There are so many capable people, including his own staff and myself, who could deal with it. He’d hear the final test pressing and say, ‘Great, it’s wonderful. Release it.’ But he always wanted to move on.”

Presently, Visconti is preparing for his latest venture – a new Sky Arts show, Tony Visconti’s Unsigned Heroes. A follow-up to his previous series Guitar Star, this show finds Visconti and fellow mentors Stewart Copeland and Imelda May tasked with discovering untapped musical talent from across the UK. “I bought some bass strings in Denmark Street, and on my way out a clerk ran out after me,” says Visconti. “He was a pedal steel guitar player. He said he plays the Eno composition ‘Moss Garden’ from ‘Heroes’, on pedal steel. I said, ‘You’re in the show!’ I’ve invited him to join the house band. I am really proud of discovering him in the street!”

The show follows the three mentors as they nurture their charges and travel to their hometowns to explore the local music scenes;  it culminates in a live show at London’s Union Chapel, with the acts performing songs either produced or arranged by Visconti. “I’ve been followed around by a cameraman for the last two days,” Visconti laughs. “This is friggin’ weird! Tomorrow we have a 12-hour technical rehearsal, with cameras following everything we do, which is something I’m not used to.”

Of course, Visconti is something of an expert when it comes to working with unknown talent. “When I came to the UK, I didn’t have any real experience,” he recalls. “I had to start at the bottom – and the bottom was Marc Bolan and David Bowie!  I met the two of them in the same month in 1967. It was very much the way I’m meeting these musicians now; people who’ve been around the block a few times, but nobody knows who they are. I’m hoping the show will change that.”

As for Bolan – who died 40 years ago on September 16 – Visconti retains fond memories of his late friend. “I met him one night when Tyrannosaurus Rex were playing in a club,” he remembers. “There was an audience of about 100 kids sitting on the floor, cross-legged, silent. It was obvious that he was a star. I approached him and Steve Peregrin Took afterwards. Marc was very cocky. He said, ‘Oh, man. You’re the seventh record producer who came in this week. I’ll consider you.’ I gave him my card and he showed up at our offices the very next day at 10am, that’s how eager he was to get a record deal!”

Aside from the television series, Visconti’s other forthcoming projects include new albums from Daphne Guinness and Perry Farrell. At 73, it seems Visconti is showing no signs of slowing down. “I do an hour of t’ai chi every day,” he explains. “That’s my anchor. I don’t drink or take drugs any more. That’s why I’m able to work into my seventies.

“My hearing is still very good. I still practise bass and guitar.  I go to the studio about midday every day. I work for about eight hours. I’ve hardly had a holiday in years. I don’t know how to do anything else in my life except travel and make records.”